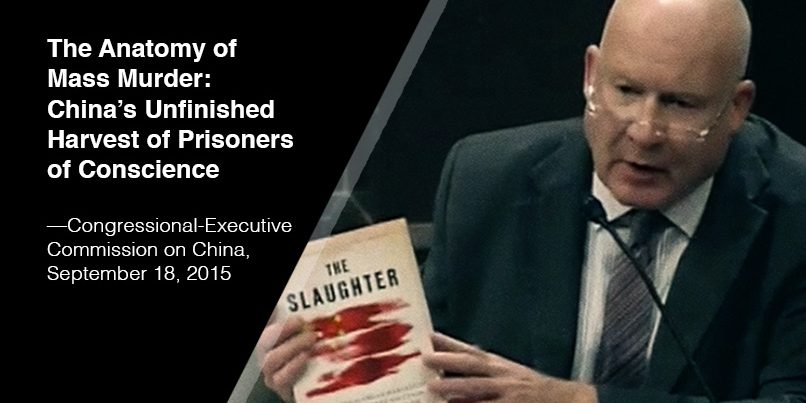 In order to piece together the story of how mass organ harvesting of prisoners of conscience evolved in China, I spoke with medical professionals, Chinese law enforcement, and over 100 refugees. My interviews began in 2006. My book, The Slaughter, was published last year.

I was not the first to examine this issue in depth. That distinction belongs to David Kilgour and David Matas, the authors of the seminal Bloody Harvest report of 2006.

Nor will I be the last. The World Organization to Investigate the Persecution of Falun Gong, a group of Chinese investigators scattered throughout the world, have just completed their own study.

Based on our collective evidence (and I have included three short excerpts from each of these reports that I request be entered into the record), here is a brief timeline of what we know:

In 1994, the first live organ harvests of death-row prisoners were performed on the execution grounds of Xinjiang in Northwest China.

In 1999, Chinese State Security launched its largest action of scale since the Cultural Revolution: the eradication of Falun Gong.

In 2000, hospitals across China began ramping up their facilities for what would become an unprecedented explosion in China’s transplant activity. And by the end of that year, well over one million Falun Gong practitioners were incarcerated in labor camps, detention centers, psychiatric facilities, and black jails.

By 2003, the first Tibetans were being targeted as well.

By the end of 2005, China’s transplant apparatus had increased so dramatically that a tissue-matched organ could be located within two weeks for any foreign organ tourist with cash. While the execution of death-row prisoners – hardened criminals – supplied some of the organs, the majority were extracted from Falun Gong practitioners – a fact that wasn’t even being kept all that secret from the prisoner population, visiting foreign surgeons, or potential customers.

Kilgour and Matas estimate 41,500 transplants were sourced from Falun Gong from 2000 to 2005. I estimate 65,000 Falun Gong practitioners were murdered for their organs from 2000 to 2008. The World Organization to Investigate the Persecution of Falun Gong believes the numbers are more likely in the hundreds of thousands.

In early 2006, the Epoch Times revealed the first allegations of the organ harvesting of Falun Gong and was followed by the Kilgour-Matas report.

By 2008, many analysts – I was among them – assumed that the Chinese State would stop harvesting prisoners of conscience for fear of international condemnation during the Beijing Olympics. Yet the physical examination of Falun Gong prisoners for their retail organs actually showed a slight uptick.

In 2012, Wang Lijun, Bo Xilai’s right-hand man, attempted to defect at the US Consulate in Chengdu. Two weeks later the World Organization to Investigate the Persecution of Falun Gong revealed that Wang had personally received a prestigious award for overseeing thousands of organ extractions and transplants. Fatally exposed, Chinese medical authorities declared to the Western press that they would cease organ harvesting of death-row prisoners over the next five years. Yet no mention was made of prisoners of conscience and third-party verification was rejected.

It is during this period, from 2012 to the present day – even as Chinese medical authorities spoke publicly of shortages due to relying on voluntary organ donation – that a very strange anomaly occurs. While China’s hospitals have maintained strict Internet silence on their transplant activities since 2006, the hiring of transplant teams at many of the most notorious hospitals for harvesting prisoners of conscience is actually on the increase. In a handful of hospitals – for example, Beijing 309 military hospital – it’s practically exponential.

Witness accounts shed light on the mystery. One spoke to me about over 500 Falun Gong prisoners having been examined for their organs in a single day – the largest cattle call that I know of. A Western doctor was recently assured by a Chinese military hospital surgeon that prisoners are still being slaughtered for organs. And Falun Gong practitioners across China’s provinces have described police forcibly administering blood tests and DNA cheek swabs – not in prison, not in a detention center, but in their homes.

I can’t supply a death count for House Christians, Uyghurs and Tibetans. But if I had to make an estimate on Falun Gong, I would double my previous numbers. I’m sure the World Organization to Investigate the Persecution of Falun Gong would go much further. Either way, two points are clear:

The official number of Chinese transplants per year –10,000 – is a fiction. The real number is likely three times that.

And the serial public declarations by the Chinese medical establishment of a new ethical environment for transplantation is simply a privacy shield to murder of prisoners of conscience.

What can we do? We are not the moral arbitrators of this tragedy. But neither is the World Health Organization or the Transplantation Society. The moral authority belongs to the families across China who have lost loved ones. Until we can hear their voices, we need, at a minimum, to follow our convictions.

I’m not a lawyer, but in my layman’s understanding, medical privacy ends when there is a gunshot involved. Why then do we adhere to strict medical privacy when there is an organ sourced in China? Why can’t we even make a proper estimate of how many Americans received transplants in China? Why do we have to make guesses based on a humorous, feel-good, account like Larry’s Kidney?

This is an obscenity; for an American to go to China for an organ in 2015 is to participate in an ongoing crime against humanity.

So I ask you to remove our privacy shield. And until the Chinese State offers the full and comprehensive accounting that the world demands, I ask you to follow the example of two very small but brave countries – Israel and now, just recently, Taiwan – and ban organ tourism to China.