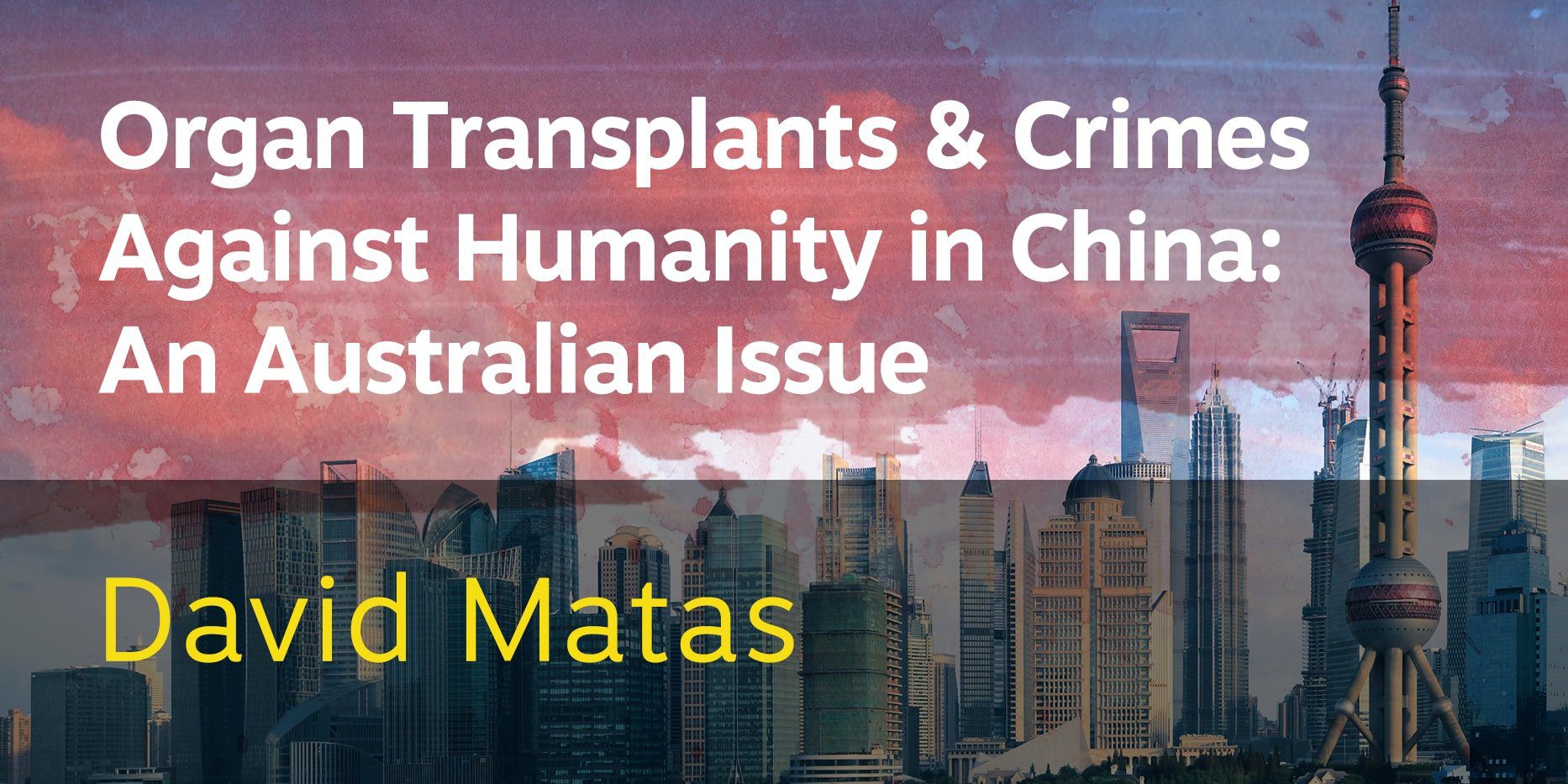 (Remarks prepared for a panel on organ transplants and crimes against humanity in China, November 18, 2019, Sydney, Australia)

Organ transplant abuse in China is a crime against humanity. The victims are prisoners of conscience, primarily practitioners of the spiritually based set of exercises Falun Gong and Uyghurs. An independent tribunal sitting in London, UK, came to that conclusion, without doubt, this June, 2019.[1]

The crime is committed in China. However, it is not necessarily and only those in China guilty of the crime. Because of transplant tourism into China, persons abroad can be complicit in the crime.

One reason David Kilgour and I came to the conclusion we did in 2006 that practitioners of Falun Gong were being killed for their organs was that there was nothing in law to stop it, either in China or abroad. Transplant technology, like most any technology, is morally neutral. Those who developed the technology initially, I am confident, never imagined it would be used to kill prisoners of conscience and made no effort to seek to put in place precautions to prevent it.

So, we end up playing catch up, preventing and punishing organ transplant abuse long after the harm has been done. But we are, slowly and inexorably, catching up. Laws to address the abuse are spreading around the world. The days when perpetrators did not have to think twice about being caught for complicity in organ transplant abuse in China are ending.

The Supreme Court of Canada in 2013 in the case of Ezokola,[2] ruled that complicity in a crime against humanity had to be a voluntary, significant and knowing contribution to the crime or the criminal purpose. Complicity does not encompass mere association or passive acquiescence. The requirement of knowledge is met by someone who is willfully blind.

What are some scenarios where persons in Australia could be found complicit in organ transplant abuse in China? Because of an international treaty and national legislation both proposed and enacted, we are seeing a lot of specific provisions which answer that question. I will say a bit about the treaty and the legislation in a bit. But first off, I would say that these acts in Australia arguably make someone complicit in organ transplant abuse in China:

2. Contacting a Chinese hospital to arrange a transplant for a patient;

3. Providing a patient going to China for transplants with medical records, prescription drugs or prescription for drugs;

4. Accompanying a patient going to China for a transplant;

What do people need to do to avoid complicity in organ transplant abuse in China? I would suggest:

1. Develop professional ethical standards directed to preventing behaviour that would amount to complicity;

2. Institute a system of mandatory reporting of transplant tourism;

3. Through ostracism, build a firewall between the transplantation industry in China and transplant health professionals abroad;

4. Counsel patients in need of transplants about transplant abuse in China;

6. Do not conduct anti-rejection drug trials in China;

7. Do not publish transplant research coming from China;

8. Do not collaborate in clinical studies with Chinese transplant professionals;

9. Do not invite Chinese transplant professionals to conferences to present papers;

10. Do not attend transplant conferences in China; and

11. Do not honour Chinese transplant professionals.

The Convention requires states parties to enact extra-territorial offences against

a) removal, use or transplantation of organs without consent or for payment,

b) solicitation or recruitment of either an organ donor or recipient,

c) offering or giving or requesting or receiving advantages to facilitate organ removal or implantation, and

There is now a spider’s web of laws being spun world wide to catch those complicit in organ transplant abuse. The prudent should avoid complicity before they are caught in this web.