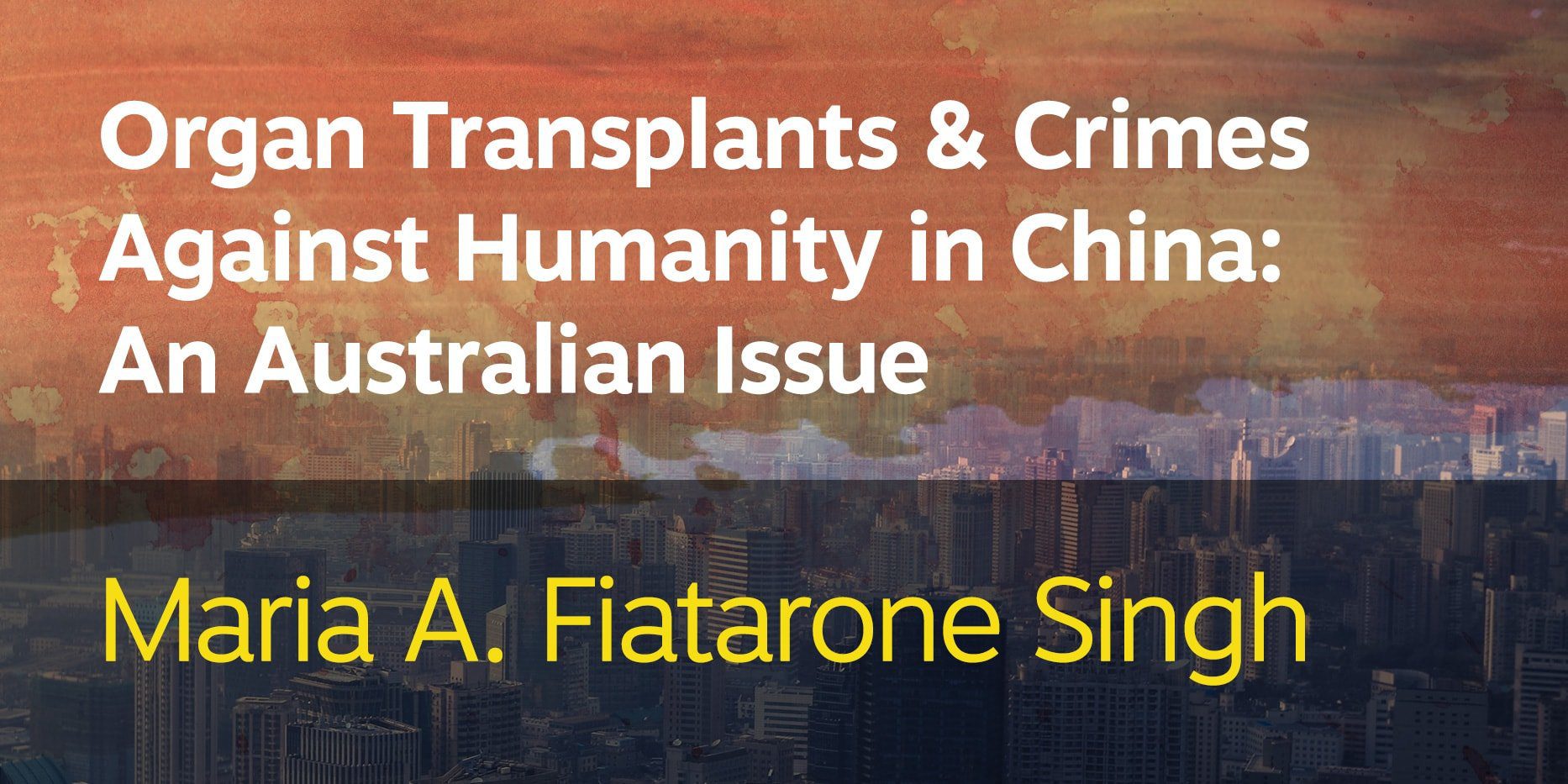 (Remarks prepared for a panel on organ transplants and crimes against humanity in China, November 18, 2019, Sydney, Australia)

Approximately 2500 years ago, the words from Epidemics, part of the Hippocratic Corpus were written: “The physician must … have two special objects in view with regard to disease, namely, to do good or to do no harm”. It may seem that organ harvesting could have little to do with the health care system and its practitioners in Australia, given the stringent and transparent laws governing transplantation in this country. So surely, we are following Hippocrates by ‘doing good’ and ‘avoiding harm’, right?

I would suggest that such a view, which is limited to the protection of patients within our own practices or our own country, is no longer relevant in our 21st century world, a world where, for example, Google Earth images expose blindfolded and handcuffed Uyghurs being marched into detention and broadcast to billions on YouTube. In such a world, how do you define ‘neighbor’, how do you define who is your responsibility as a health care professional? In a survey of the 540 nephrologists and transplant surgeons in Australia published in The MJA last month, 68% said that they had discussed overseas travel for transplantation with at least one patient, and 53% had cared for at least one patient after an overseas transplantation, with many of these organs not recorded on our national registry, and most from China. Thus, in fact the presumed divide between “our patients” and “others” is utterly artificial. Our two health care systems are irreversibly linked if the death of an non-consenting Chinese prisoner of conscience has given life to an Australian patient. Such linkage means that our Hippocratic oath indeed extends to our unseen neighbors, and we are just as obliged to “do no harm” to them. This means exposing and preventing unethical organ harvesting wherever it occurs.

How can we do this in practice?

First, acknowledge that silence is complicity, and in this instance, complicity is lethal for the prisoner of conscience who is sacrificed for his or her commercial body parts. Raising awareness of this human trafficking and organ trade by talking to our colleagues, patients, ministers, health system administrators, and the broader public is crucial to ending this crime. If we eschew blood diamonds and chocolates made from cocoa harvested by slaves, then surely we can advise patients, no matter how desperate they present, that traveling to China may result in the survival of their body, but only at the expense of something far greater.

Second, consider ways to increase supplies of ethically available organs in Australia, by registering to be an organ donor, and encouraging the same in our professional and personal circles, so that the 5-yr wait for an organ does not become a burden too great to bear for a family experiencing organ failure in a loved one.

Third, work to reduce health inequities and social determinants that result in the growing demand for organs, particularly kidneys, due to hypertension and type 2 diabetes. Such work spans all health care professionals, and is certainly not limited to the 540 doctors involved in nephology and transplantation. This will involve addressing poor health literacy, disparity in the care of Indigenous peoples, obesity, inactivity, smoking, and other factors predisposing to premature organ failure and the long waiting times, which increase the incentive to seek unethical means of transplantation.

Finally, for those of you who may interact in some way with professionals or institutions in China, inform yourself by reading The Update and other references as to whether your contacts work within institutions which have been undeniably involved in this illegal organ trade. Would it be possible, for example, for an institution so tainted as to harvest organs from unwilling prisoners for profit, to be honorable and ethical in whatever other business or academic endeavors they are engaged in with you? Some Western doctors would suggest that Chinese health officials have promised to reform, and therefore they and their institutions should be welcomed into the international medical community. I believe this is premature and unwarranted. There is no evidence that supports the Chinese medical authorities’ claim that all harvesting of prisoners stopped on January 1, 2015. In fact, expansion of this practice from Falun Gong practitioners to imprisoned Uyghurs (marketed to Middle Eastern buyers demanding ‘Halal’ organs) appears the more likely and horrific scenario. Until transparent reporting of what is actually happening inside China is available, skepticism is mandatory.

As Ethan Gutmann has said: ‘We cannot prevent the CCP from continuing this crime against humanity, but we can at least limit the moral decay of whatever society we live in.’ There is complicity in our silence. Speak, even if your voice trembles.