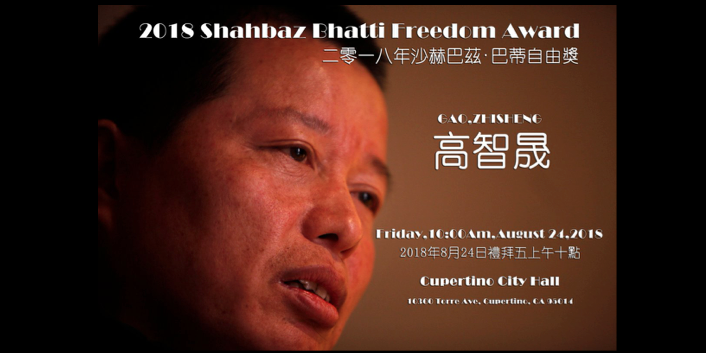 A Chinese human rights lawyer persecuted by authorities for his support of oppressed communities, including Christians and Falun Gong practitioners, was awarded the Shahbaz Bhatti Freedom Award on 29th August.

The whereabouts of the lawyer, Gao Zhisheng, have not been publicly known since August, 2017, so the award was presented to his wife, Geng He, in California by David Kilgour, a goodwill ambassador and board member of the First Step Forum, an initiative that monitors religious freedom and human right abuses worldwide.

The Shahbaz Bhatti Freedom Award is named after Pakistan’s first Christian Cabinet Minister, murdered in 2011 for his criticism of Pakistan’s blasphemy laws and his defence of Aasiya Noreen, a Christian woman still on death row for a conviction of blasphemy of Islam. She is widely known as Asia Bibi.

The lawyer received the award for his “dedication to China’s religious freedom and human rights”.

“Lawyer Gao is internationally respected enormously,” Kilgour said at the awards ceremony. “He was first targeted by the Party and the state in China in 2005 for standing up for various oppressed communities in China, including Christians, coal miners,” and adherents of Falun Gong, a Chinese spiritual practice.

WATCH – China at a Crossroads – Standing up for Human Rights During the Coronavirus Pandemic
May 27, 2020
Search News
News Categories
Recent Posts
Go to Top