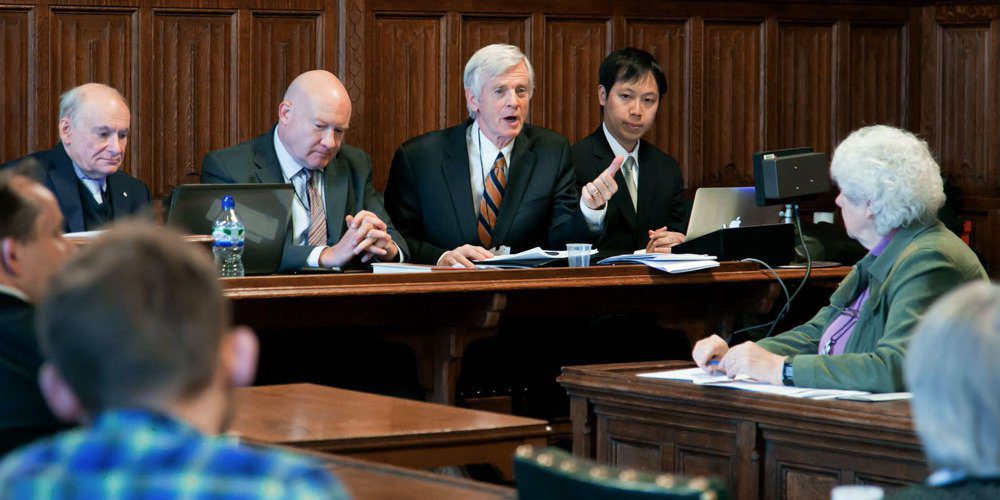 LONDON—During a pause in the current world tour by authors of books on organ harvesting, the Chinese regime announced it will end the practice of harvesting organs from prisoners by Jan. 1, 2015.

As well as being in the middle of the authors’ tour of the U.S., Canada, and Europe, the announcement, made on Dec. 4, also comes a few days before International Human Rights Day on December 10 and a month after the Canadian Parliament Subcommittee on International Human Rights passed a resolution on organ harvesting stating its deep concern about the practice in China.

But whatever the reasons for the timing, it is generally considered that the Chinese Communist Party (CCP) will renege on this promise as they have on all previous promises to modify the practice.

“The Chinese Medical Association first made this promise in 2007, a year before the Olympic Games were held in Beijing,” says a release from Doctors Against Forced Organ Harvesting (DAFOH), a global organisation of medical doctors of various specialties and their supporters which is the major watchdog on human rights issues around transplants of human organs.

With no organ donor programme, and an estimate of only 1700 executions each year according to Amnesty International, there is a gap with the approximately 10,000 transplants claimed by the Chinese authorities to be carried out each year in China.

This anomaly is explored in two books by the authors on the current tour.

Ethan Gutmann, author of “The Slaughter: Mass Killings, Organ Harvesting, and China’s Secret Solution to Its Dissident Problem” published in August 2014, said in an interview in Edinburgh, Scotland, on Nov. 27, “The Kilgour-Matas report came out in 2006. For a lot of people, even people who haven’t yet read the book [‘The Slaughter’], the very idea that somebody would be coming out in 2014 with a new book on this subject indicates that Kilgour and Matas did not dig a dry hole, they struck something very deep indeed. No journalist in their right mind would be putting so much effort, seven years of effort, into writing a book on the subject otherwise.”

The practice of organised extraction of organs from unwilling “donors” in China became publicised with the 2006 and 2007 reports printed on the Internet by David Kilgour and David Matas. Both are lawyers with Mr Kilgour having been Canadian Secretary of State for Asia-Pacific, and Mr Matas, who practices as an international human rights lawyer, is Director of the International Centre for Human Rights & Democratic Development

In 2005, U.N. Special Rapporteur on Torture Manfred Nowak had been given limited access to the Chinese prison system and reported that torture was widespread.

Kilgour and Matas were denied the independence they required from the Chinese Communist Party (CCP) to conduct their own investigation in China. From the testimonies of victims, patients, and evidence from hospitals, they produced preliminary reports and then a book called “Bloody Harvest, the killing of Falun Gong for their organs” published in 2009. Their work from 2006 onwards has revealed that torture continues in transplant theatres in China where organs are often removed without anaesthetics or basic care.

These three authors have recently finished the U.K. part of their extensive tour, visiting the U.K. and Scottish Parliaments in London and Edinburgh as well as the Welsh Assembly in Cardiff, and other establishments in Glasgow, Leeds, and Nottingham.

Member of the Scottish Parliament (MSP) Bob Doris told Epoch Times that he was very disappointed in what he heard on November 27. “Ethan Gutmann and others came to the Scottish Parliament to give us an update. They were telling us there seemed to be a perceived desire by the Chinese government, who had already admitted there was forced organ harvesting [he is referring to the forced organ harvesting of executed prisoners], and that they wished to eradicate it and see it end in, I think 3-5 years was what we heard.

Falun Gong is a traditional Chinese practice involving meditation, exercises, and teachings espousing truthfulness, compassion, and tolerance which has over 100 million adherents throughout the world but which has been viciously persecuted by the CCP since July 1999. With the CCP estimating the number of adherents in 1999 as 70 million, Falun Gong is the largest group from which the CCP draws its human organs for sale.

On Thursday, Nov. 6, 2014, The Canadian Parliament’s Subcommittee on International Human Rights passed a resolution on organ harvesting in China. And a bill, H.Res.281, with similar content specifying Falun Gong is going through the American Congress.

As regards the Scottish Parliament, Mr Doris said, “What I could do as a member of Scotland’s Parliament, other than raising awareness of it, would be to make sure that in the potentially tiny number of instances where people of Scotland and the UK may be going to China as organ tourists—is make sure that they know it’s wrong, its illegal, and prosecutable.

“We have to look at the Scottish legislative framework to see how we can best do that but I also have to say it wouldn’t be my focus to criminalise vulnerable people who are desperate for organs—it would be my desire to criminalise those despicable people who seek to make profit through the supply chain of organs harvested from China,” Mr Doris said.

“I would rather focus on those that are making money from human rights abuses rather than the vulnerable person who is desperate for an organ.

“Let’s see what legislative framework we have in the Scottish parliament. One or two examples have been given today: I would be delighted to explore them further,” he said.

The sponsor for the talk in the Welsh Assembly, Rhodri Glyn Thomas AM (Party of Wales), suggested a ‘No name motion’ which would give the opportunity to debate the issues and so highlight them.