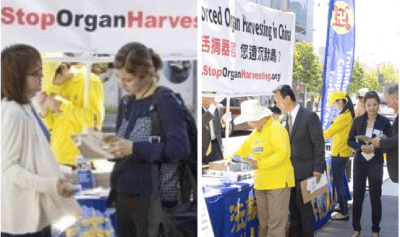 The science of organ transplants is supposed to help save people, but not in China. Under communist rule, organ harvesting has been used as an extreme measure to eradicate and profit from Falun Gong practitioners. They are killed and their organs harvested on demand for “organ tourism” patients.

Attendees of the World Transplant Congress at San Francisco’s Moscone West Convention Center are being apprised of this ongoing crime against humanity, as they convene and share the latest in the industry.

“Help to Stop Forced Organ Harvesting in China,” the Falun Gong banner announced to the 7,000 specialists attending the conference. Many of them signed the petition, calling for a thorough investigation and an end to forced organ harvesting in China.

Dr. Broumand, a kidney transplant expert from Iran, said that organ harvesting is immoral and in violation of the Declaration of Istanbul of 2008, which provides ethical guidelines for practices in organ donation and transplantation.

Calling organ harvesting “a shame for mankind,” he expressed a strong hope that the crimes be ended immediately.

Ms. Dacia Raicae Regve, a researcher from Spain, echoed Dr. Broumand’s view. She stated that organ harvesting in China is killing, that human beings have a right to life.

A German doctor had heard about forced organ harvesting in China. According to him, many of China’s transplanted organs came from prisoners prior to 2006. 650 liver transplants were conducted in 2003 at the Affiliated Hospital of Nanjing University Medical School.

“That same hospital performed 2,400 liver transplants in 2006. The organs came from Chinese Communist Party ‘concentration camps.’ There were 80 organ transplant surgeons at that hospital alone,” he recalled, commenting on the unusually large number of transplants at China’s hospitals.

Dr. Zhang from the Beijing Friendship Hospital acknowledged that the organ donation rate in China is virtually nil. However, his hospital does a liver transplant almost every day.

Dr. Su from McGill University in Canada noted that the wait time for an organ is normally four or five years in the U.S. and Canada. Chris B, a nehprologist from California, told practitioners that a liver transplant patient normally has to wait nine years for a matching organ.

However, the wait time in China’s hospitals is advertised as a matter of weeks. And, if the first organ doesn’t work for some reason, a backup is guaranteed in a few weeks. This would not be possible without China’s live organ pool.

Dr. Perumalla from India is against the practice of registering Falun Gong practitioners into an organ database and killing them on demand for organ transplants. He calls it “absolutely wrong.”

As he signed the petition calling for an end to forced organ harvesting, Fred Cook, who works at the Convention Center, told practitioners that many inside were talking about this topic.

He said that he had seen reports about a provincial level Chinese Communist Party (CCP) official having collaborated with local police station, a prison, and a hospital to harvest organs from Falun Gong practitioners. He mentioned that two doctors were expelled from the World Transplant Congress two years ago, after their unethical organ transplant practices were verified.

He encouraged Falun Gong practitioners to continue their efforts to raise awareness of such an important issue.

Doctor Hill from Kolkata Hospital in India condemned organ harvesting and said that his hospital has strict procedures to document voluntary organ donations. He considered the practice of forced organ harvesting “wrong. It shouldn’t happen and should be condemned.”

Ms. Diane Bunag, a San Francisco resident, voiced strong support for practitioners’ efforts to end forced organ harvesting in China. She said she had read practitioners’ information, and tried out the Falun Gong exercises and like it.