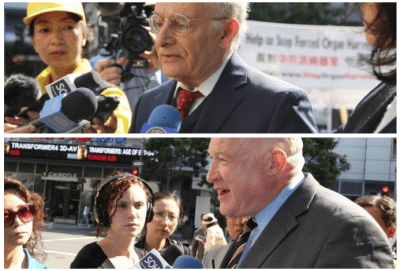 Doctors from around the world met in San Francisco for the World Transplant Congress held at Moscone Center West July 26–31.

The meetings and discussions inside the hall focus on complex medical procedures and the collaboration of doctors around the world.

Meanwhile, outside on the sidewalk, there was a protest for human rights.

Falun Gong practitioners came from around the Bay Area to protest forced organ harvesting in China. They hope the Transplant Society will employ more effective methods and active steps to end the killing of Falun Gong practitioners, whose organs are involuntarily removed and sold for profit to transplant patients, a scheme first uncovered in 2006.

“There are several victims here who have narrowly escaped China’s notorious labor camps, and who were potential victims of forced organ harvesting,” said Alicia Zhao, coordinator of a press event on Tuesday morning in front of the Moscone Center.

“Most of them tell the stories of having blood being drawn regularly while in detention. We all know this was not done out of a humanitarian reason, as they were tortured on a regular basis, and some to death,” she said.

David Matas, a Canadian human rights lawyer and co-author of a lengthy investigation on the allegations of forced organ harvesting, concluded in his work “the allegations are true.”

“One of the perpetual problems that we deal with,” said Matas in San Francisco on Tuesday, “is that China has a huge number of transplants, but no explanation of the sourcing. They have said [it’s from] prisoners sentenced to death and then executed, but they don’t give numbers.”

“The numbers are so inconsistent,” he continued. “The known numbers of death penalties are around 3,000, so the organs, which number in the hundreds of thousands or higher, must be coming from somewhere else. This is but one of the many pieces of evidence that, put together, made me and others conclude that Falun Gong practitioners are killed for their organs.”

“I am here to mobilize the transplant community to do more to combat transplant abuse in China,” Matas said.

Bu Dongwei, 46, of San Francisco, said that while in detention in a labor camp in China from 2006 to 2008, he had his blood drawn regularly every three months. “Blood was drawn only from Falun Gong practitioners, and they never told us any results of the tests,” said Bu.

Bu’s wife, Hongwei Lou, wrote a book called “Remember the Truth” [http://www.yunboutique.com/booksanddigital/book-remember-the-truth] while her husband was still in the labor camp. In it she writes her response after learning of organ harvesting:

“I stared into space for a long time, remembering how those Falun Gong practitioners who persisted against ‘transformation’ had disappeared without a trace.

“My heart slowly shattered, and my tears flowed like water gushing out of a broken riverbank. As I listened to the sound of rain outside my window, a line from ancient Chinese poet Bai Juyi’s ‘Song of Eternal Sorrow’ surfaced in my brain: ‘The night rain hears a grief-stricken sound from the bell.’”

Li Jie, of San Jose, was detained in a Beijing labor camp from 2000 to 2004. “When I was detained in Beijing, all Falun Gong practitioners were forced to have blood tests and other medical examinations on regular basis.”

Yolanda Yao, of Sunnyvale, a former Ph.D. student in China, was sentenced to a Beijing labor camp from 2011 to 2013. She was forced to undergo physical exams and X-rays, and her blood was also drawn.

Li Jienhua, of San Jose, said that during her detention she was also subject to numerous physical exams and had blood samples collected.

“I was a skeptic on organ harvesting,” he said on Tuesday. “I am not a practitioner, I am affiliated with no group—I am an independent researcher and investigative reporter. I was skeptical, but the evidence is unmistakable in my mind that this is not only going on and occurring, but it may in some sense even be growing.”

“I think it is very important to be here with the medical community,” Gutmann continued, “but this has to go to the political community as well. No one can ignore this issue. I ask for people to read, to take this seriously, to make up their own minds, and I ask for a fair hearing.”

Gutmann was asked for his comments on the recent news that police across China are now breaking into Falun Gong practitioners’ homes and forcing them to give blood samples.

“I am half Jewish,” Gutmann said, “and sometimes people ask what motivates me to do this work, and I have to admit, privately, that because I am half Jewish, and I lost relatives during the holocaust, this influences me and it drives me.”

Referring to his new book, “The Slaughter,” to be released Aug. 12, he said, “Through my entire book, I don’t make even a single reference to the Holocaust because I consider the Holocaust to be special and unique in history. This finding—if it is true—for the first time, we need to think of this as a Holocaust reference—there is an echo of the Holocaust in this.”

Additional information on forced organ harvesting in China can be found at stoporganharvesting.org.