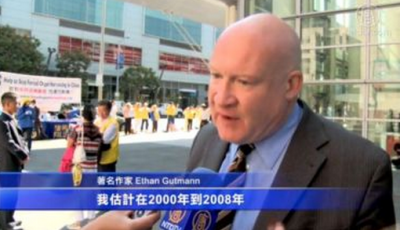 Human rights groups have long criticized China for taking organs from executed prisoners, the source of most transplanted organs.

The resolution, which now goes to the full House, contends there are “persistent and credible reports” of state-sanctioned organ harvesting from nonconsenting prisoners including large numbers from the Falun Gong meditation practice and members of other religious and ethnic minority groups. China banned Falun Gong in 1999.

The resolution also calls for a State Department investigation into transplant practices in China.

The resolution’s chief sponsor, Republican Rep. Ileana Ros-Lehtinen, accused China’s regime of a “violent and targeted campaign” against Falun Gong practitioners and claimed detainees are executed for their organs.

The committee’s top-ranking Democrat, Rep. Eliot Engel, called organ harvesting an “unconscionable violation of human rights,” and the targeting of people for their faith or ethnicity intolerable. He said there was no indication China is living up to its word to end transplants from executed prisoners and set up a voluntary organ donation system.

As Epoch Times previously reported, the resolution notes, “The number of organ transplant operations in China increased significantly after 1999, corresponding with the onset of the persecution of Falun Gong.”

The resolution also notes that Falun Gong practitioners in detention receive medical exams not given other prisoners whose purpose appears to be to assess the health of the practitioners’ vital organs and their potential candidacy for organ harvesting.

The resolution also refers to evidence provided by undercover investigators who made phone calls to 17 Chinese hospitals in 2006. Doctors admitted that they used or could obtain vital organs from Falun Gong practitioners. Some implicated the collusion of local courts and police in obtaining the organs.

Transcripts and audio recordings of conversations between undercover investigators and senior Chinese Communist Party officials released in May 2012 by the World Organization to Investigate the Persecution of Falun Gong (WOIPFG) are also referred to in the resolution. The conversations document that several officials “indicated that central authorities were aware of or involved in organ harvesting from Falun Gong prisoners,” states the resolution.

The resolution refers to the findings of investigator Ethan Gutmann, who estimated 65,000 Falun Gong practitioners may have been killed for their organs in the years 2000–2008.

The resolution provides a brief summary of the testimony given by Chinese physician Wang Guoqi in June 2001 before the House of Representatives International Relations Subcommittee on International Organizations and Human Rights. Wang testified, “Hospitals in China worked in collusion with state security agencies to extract organs from executed prisoners without written consent of the organ donors, and that these transplants were a lucrative source of income.”