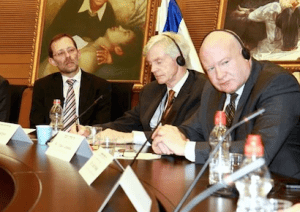 Honourable members of the Knesset,

Permit me to thank you for the welcome given to the recent delegation from Canada.  The visit and our prime minister’s address to the Knesset were widely reported across our country.

Permit me to repeat four excerpts from the speech:

“Canada supports Israel fundamentally because it is right to do so … The special friendship between Canada and Israel is rooted in shared values … Israel is the only country in the Middle East which has long anchored itself in the ideals of freedom, democracy and the rule of law … when (universal values) are threatened anywhere, they are threatened everywhere.”

When human dignity is denied in a major way in China, it can threaten us all, so I hope the legislators and peoples in both our countries will do what is correct without misplaced fear.

All of us in the international coalition to end organ pillaging/trafficking in China can be pleased that you’re holding this important hearing.

Time is urgent; I am certain that men and women convicted of nothing are currently being killed in China so that their vital organs can be sold.

The principal victim community, Falun Gong (or Falun Dafa), uses a set of gentle exercises for the body. For the mind, its core principles are “truthfulness, compassion and forbearance”, which echo those of many spiritual faiths.

Falun Gong was introduced to the general public in China only in 1992; it grew within seven years to 70-100 million practitioners by the government’s own estimate. Its belief system differs sharply from the atheism/materialism of the Communist Party.

In July, 1999, then Party leader Jiang Zemin launched a violent campaign, the  stated purpose of which was to “eradicate” Falun Gong.

A U.S. government report concluded several years ago that at least half of the inmates in the vast network of forced labour camps across China—one estimate is about 350 camps—are Falun Gong.  Former detainees interviewed by David Matas and myself in various locations outside China, consistently indicated that Falun Gong were both the largest group in the camps and were singled out for systematic torture and abuse.

Tens of millions of peaceful/non-political Falun Gong from all regions and walks of life have been in effect deemed subhuman by the Beijing government. The party-state policy is that they can accordingly be killed on demand without any recourse.

In May 2006 the Coalition to Investigate the Persecution of Falun Gong in China (CIPFG) asked David Matas and me to investigate the claims of organ pillaging/trafficking from living Falun Gong practitioners. We released two reports and one book and have continued to investigate this issue. (Our revised report is available in 18 languages, including Hebrew, from www.david-kilgour.com). We concluded that for 41,500 transplants done in the years 2000-2005 alone in China, the only plausible explanation for sourcing was Falun Gong.

Our main conclusion reads that there “continues today to be large-scale organ seizures from unwilling Falun Gong practitioners (…) Their vital organs, including kidneys, livers, corneas and hearts, were seized involuntarily for sale at high prices, sometimes to foreigners, who normally face long waits for voluntary donations of such organs in their home countries.”

Permit me to mention only a small fraction of the evidence that led us to our conclusion:

In 2006, the European Parliament conducted a hearing and adopted a resolution condemning the detention/torture of Falun Gong practitioners and expressing concern over reports of organ harvesting. At recent hearings, Tunne Kelam on the Foreign Affairs Committee noted, ”if we don’t take knowledge seriously about this practice, we have become morally and politically co-responsible for what’s going on.”

Since June 2011, the online U.S. non-immigration visa application (Form DS-160) asks applicants if they have been involved in transplant abuse.

In July 2013, Congresswoman Ileana Ros-Lehtinen (R-Fla.) and Rep. Robert Andrews (D-N.J.) introduced Resolution 281 in the Committee on Foreign Affairs which calls on China to stop immediately organ trafficking from its prisoners. It adds, “persistent and credible reports of systematic, state-sanctioned organ harvesting from non-consenting prisoners of conscience” is the basis for concern, and then provides a summary of the evidence that links most organ trafficking with a single-minded campaign to persecute and “eradicate” the practice of Falun Gong.

The Knesset admirably passed legislation banning the sale and brokerage of organs. The law also ended funding through the health insurance system of transplants in China for Israeli nationals. Transplant surgeon Jay Lavee in his contribution to the book, State Organs, explains your law as a reaction to transplant abuse in China. Israel now leads the world campaign to end trafficking.

In Ireland this past July, the Joint Committee on Foreign Affairs and Trade conducted a hearing and unanimously passed a motion which called on the Irish Government to support the UN and Council of Europe initiatives to oppose forced organ harvesting in China.

In the parliament of New South Wales, legislation was proposed in 2013 against organ trafficking, which would bar any resident of the state from buying a trafficked organ anywhere. Last March, the Australian Senate unanimously passed a motion urging the government to oppose organ harvesting in China. The motion also calls on the government to follow the example of the United States in implementing a new visa requirement.

The NHS blood and transplant data, I’m told, confirm that some UK nationals still travel to China for organ transplants and subsequently receive aftercare from the NHS. For UK and other foreigners who go to China as organ tourists, one hopes that they do not understand the horror inflicted on the ”donors”.

Various medical organizations have issued statements urging measures to stop organ pillaging. For example, in 2006 the World Medical Association (WMA) demanded that China stop using prisoners as organ donors. Recently the policy of the WMA includes a paragraph that organ donation from prisoners is not acceptable in countries where the death penalty is practised.

I should single out for praise Dr Jay Lavee and Doctors Against Forced Organ Harvesting (DAFOH), who have been effective in a number of nations.

Matas and I engaged in extensive interviews of organ recipients and family members. The surgery is conducted in almost total secrecy. Recipients and their support networks are not told the identity of the donors; nor are they shown written consent from donors. The identities of the operating surgeon and support staff are often not disclosed, despite requests for information.

One organ recipient told us that a military doctor, Major Tan, in Shanghai tested the compatibility of seven sets of kidneys before a successful match was found. The doctor would leave the hospital in army uniform and return later with containers holding kidneys.

The international coalition to end organ pillaging will not rest until this inhuman commerce ends in China completely. Until the growing loss of face, often achieved through ‘naming and shaming’ the party-state, proves effective, other countries and their legislators have a responsibility to end complicity with this inhuman abuse by our own nationals.

Other governments should follow Israel by enacting measures to criminalize the purchase of trafficked organs at home or abroad. They could also require reporting of ‘organ tourism’, ban entry of those involved in trafficking organs, and prohibit their pharmaceutical companies from doing transplant field tests and clinical trials in China.

Responsible business people should reduce trade and investment in China until its government ceases organ trafficking. As Beijing has also directed all of its embassies to spread hatred and false information against Falun Gong, how can anyone continue to do business as usual? In so doing, they are financing and nurturing a party-state, which pillages organs from its citizens for commercial purposes.

Standing for human dignity here would in all likelihood not cost a country trade or other business with China. Consider Norway, the Czech Republic and Canada. When Liu Xiaobo was awarded the Nobel Peace Prize in 2010, the government of Norway received considerable pressure from the embassy of China in Oslo, yet the award was made and nothing appears to have resulted to harm the economy of Norway.

Similar threats were made to the late Vaclev Havel when he invited the Dalai Lama to Prague, but His Holiness came and nothing harmful resulted. Prime Minister Harper received a lot of threats from Beijing when he said he would not let the “almighty dollar” determine his government’s China policy. Bombardier announced its biggest deal ever in China at about the same time that the threats were coming from China’s party -state. I think a number of party bosses respect democratic nation leaders who stand for human dignity.

Many of us and beyond China ought to be having a greater impact on this grave matter, not only because it is necessary to protect thousands of innocent people from being killed, but also because it is good for China and the international community as a whole. We all want a China that enjoys the rule of law, dignity for all and democratic governance.