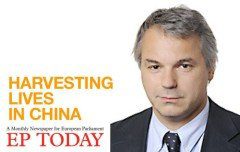 MEP Niccolò Rinaldi is a member of the Subcommittee on Human Rights of the European Parliament.

Organ trafficking is one of the most important issues government agencies and human rights organizations are fighting on an international scale due to the international criminal networks which profit from the sale of human organs. One of the tragedies of the modern medical world is that involuntary organ transplant and organ harvesting is increasing as medical science finds new ways of extending life expectancy.  The removal of vital organs specifically for transplant, and sometimes medical research, without permission, is often, performed with the assistance of trained medical personnel yet without the donor’s consent..

This reality though becomes even more brutal when this criminal and inhuman activity is conducted with the government’s consent or even facilitation. This is the case of China, where organ harvesting from prisoners is an official government policy conducted at public hospitals.

During its plenary of the December 12, 2013, the European Parliament passed a Resolution on the serious human rights abuses in China, and more specifically violations related to organ transplants, which have recently come to light.  China is one of the leading countries worldwide regarding the execution of prisoners. It appears though that the Chinese government has transformed this fact into a multimillion dollar business.

China’s Deputy Health Minister, Gao Qiang, acknowledged in 2005 that almost all organs come from executed prisoners, however, the number of executions in China is a state secret.  China is providing no firm statistics on this issue despite international calls for information.  According to the Declaration of Istanbul, which codifies strict procedural and ethical guidelines on organ donations, it is required that donors must give their consent prior to any transplant procedure and further, condemned prisoners cannot be donors. Despite statements form Chinese officials that these guidelines will be implemented, reality in China is moving on the exact opposite direction. Reports from NGOs and international organizations suggest that Chinese military doctors are engaged in organ harvesting from prisoners and labor-camp detainees, especially prisoners of conscience.

Currently, China stands next to the US on the number of reported transplants performed every year, with 600 transplant centers nationwide. It has effectively become a destination of transplant tourism with perspective organ receivers traveling to China from neighboring countries for the purpose of finding a matching “donor”. You Mei-nu, a Taiwanese  Democratic Progressive Party (DPP) legislator said recently that “Taiwan is a nation governed by human rights principles and Taiwanese, who are guaranteed the right to health, should not build their wellbeing on somebody else’s sorrow or pain” acknowledging that China has been the main destination of Taiwanese needing organ transplants.

The main victims of this practice have been the members of the Falun Gong community. Falun Gong is a spiritual movement which first appeared in Chine during 1991 and soon gained popularity among Chinese citizens due to its teachings. The government of China, though, considered this movement as a threat and initiated a crackdown against its followers in 1999 in a campaign targeting at the eradication of the movement. Most of its members were sent to labor prisons receiving the highest penalties.

According to a Resolution introduced to the House of Representatives in the Unites States,  there was a significant increase of the number of organ transplants in China after 1999, which related to an increase in  the persecution of the Falun Gong community. According to the Resolution, Falun Gong inmates are the only ones submitted to regular medical examinations with emphasis given to their vital organs, such as heart and liver, while doctors have admitted f using organs from Falun Gong followers. About two third of the inmates in China’s labor camps are Falun Gong practitioners. The Resolution also describes that many of the victims were still alive when harvested for their organs.

It is essential that the European Parliament and the European Commission External Action Services look into this matter following the acceptance of the Resolution. Both must call on the Chinese government to implement the international standards and for more transparency on transplant procedures. This is an issue of fundamental human rights which, if reports prove to be accurate, which could acquire genocidal perspectives. The International community needs to step in before the situation escalates.

This article was originally published on http://eptoday.com