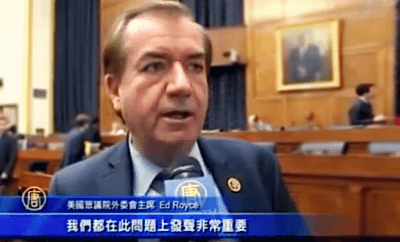 The U.S. House Resolution 281 is gaining support from a subcommittee of the House Committee on Foreign Affairs, Asia and the Pacific, and is now awaiting a final vote.

The Resolution explicitly calls on the CCP to immediately end the practice of organ harvesting from all prisoners; demands an immediate end to the 15-year persecution of the Falun Gong spiritual practice and the immediate release of all Falun Gong practitioners and prisoners of conscience.

Chairman and Congressman Steve Chabot has indicated that the H. Res. 281 has won the support of the entire committee on Asia and the Pacific. He says forcibly harvesting organs against a person’s will is absolutely unacceptable and should be condemned.

Chabot says live organ harvesting is happening now but many people are not aware of it. He believes the United States should play a role in exposing the CCP’s crimes to the world.

Tang Jitian, human rights lawyer: “If the US Congress uses their power to urge the US administration to pay attention to China’s human rights and prompt the CCP to adopt international standards and improve the human rights, it would be good news for both China and the world.”

Sponsor of the resolution No. 281, Rep. Ileana Ros-Lehtinen says that there is a large amount of evidence showing the selling of forcibly harvested organs, and such ghoulish and heinous crimes must be stopped.

Han Zhiguang Beijing lawyer: “Live organ harvesting is a crime that some people question for not having seen it with their own eyes; it’s hard for me to believe it really exists because it’s too cruel and will cause wide-spread indignation; the criminals will certainly be punished by law.”

On Oct. 21, the World Organization to Investigate the Persecution of Falun Gong (WOIPFG) revealed a number of telephone recordings. Included was a call to Liang Guanglie, former Minister for China’s National Defense, in which he admitted that the Central Military Commission had discussed the detention of Falun Gong practitioners, and that the military hospitals were engaging in live organ harvesting. Another call was to Bai Shuzhong, ex- director of the Health Department of the PLA General Logistics Department, who admitted that former CCP leader, Jiang Zemin, had directly ordered the organ harvesting from living Falun Gong practitioners.

Congressman Dana Rohrabacher says the crimes of organ harvesting are murderous. The Resolution will have a lasting effect in alerting Americans that such terrible murder is in progress.

Wang Yajun, Beijing lawyer: “Whether it’s an international convention or national law, live organ harvesting is murder and any evidence should be made public, but in China, the environment does not allow it.” “But no matter what, everyone should try to expose this criminal act, call on others to expose it, and put sanctions on the people who are accountable.”

Lawyer Tang Jitian was illegally detained for 15 days for defending Falun Gong practitioners. After his release, NTD was told that he had been tortured during detention and the police had threatened to take his kidney and bury him alive.

Tang Jitian: “There are some reports on the Internet about organ harvesting; if it’s true, it’s no ordinary criminal offense, but a systematic crime against humanity.” “Those who conduct the acts or direct the acts will be punished by laws and international sanctions.”

Congressman Dana Rohrabacher has pointed out that after the Congress passes the H. Res. 281, those involved in the crimes will be located and brought to justice. The criminals will be presented to the CCP and the CCP should be held accountable the crimes.

It is understood that after the midterm elections, more congressmen who endorsed the H. Res. 281 will be included in the congressional record, when parliament resumes.