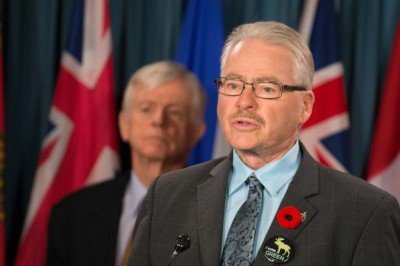 OTTAWA—Paul Li is afraid his father could be one of the thousands of Falun Gong adherents who disappear in jails and leave in bits and pieces, killed for his organs in a business that has shocked Canadian officials.

It’s a crime beyond belief, or at least it was when reports of the practice first emerged in 2006. After eight years of investigation the evidence has become overwhelming, say Canadian members of Parliament who have studied the issue.

“There is no question that this is happening, the practice has been verified several times,” said Liberal MP Judy Sgro to hundreds of Falun Gong practitioners at a rally on Parliament Hill on Tuesday, Nov. 4.

Sgro has seconded a bill introduced by fellow Liberal Irwin Cotler that would effectively ban Canadians from travelling to China for organ transplants, something not uncommon in the Chinese-Canadian community according to transplant doctors in Toronto.

After her remarks at the rally, Sgro walked into the House of Commons to make a similar statement and convey the Falun Gong practitioners’ call for the prime minister to take action during his upcoming trip to China.

“Falun Dafa practitioners on the Hill are asking him to please raise the issue of forced organ harvesting, especially now that the threat involves 10 family members of Canadians incarcerated there,” she told the House.

One of those family members is Li’s father, imprisoned seven months ago for the third time. His crime is the same as always—telling people that Falun Gong’s meditation exercises and principles are good, that it teaches truthfulness, compassion, and tolerance, and that the Chinese Communist Party is torturing and killing people who practice it.

Li Xiaobo’s first prison term was one year in 2004. There was no trial. The second was eight years, from 2005 to 2012. Li is worried that his father, now in his 60s, may not return from his third term—that he may even be killed for his organs.

“That is where I am deeply worried,” Li told reporters at a press conference inside Parliament’s Centre Block.

“I was not allowed to contact my father at all. So I had no direct contact with my father since he was detained.”

Li Xiaobo was once a mayor of a city in China before being disillusioned by the corruption that surrounded him. He left to start a business in real estate and started practicing Falun Gong in 1996.

“Guided by its teachings of truthfulness, compassion, and tolerance, my father’s temper and overall health improved, and he gave up smoking and other bad habits. … One of his colleagues once told me, ‘Your father is the most virtuous man I have ever met,’ writes Li in a statement he read to the press.

‘A government of fear’

Outside on the dreary day was Michelle (Tianxiao) Zhang. Sprinkled by rain, she held a banner about organ harvesting as the gathered crowd of practitioners meditated and practiced Falun Gong’s slow-moving tai-chi like exercises. In previous press conferences it was Zhang who told her story about a sister who disappeared in Chinese prison camps never to be seen again.

Zhang, who lives in Toronto, has believed for several years that her sister, Yunhe Zhang, died in prison for her belief in Falun Gong. Several sources told her father in China that Yunhe had been detained in 2002 and some other detained Falun Gong practitioners said the same.

Then a few days ago Zhang heard her sister might have been hiding all this time, wandering in an effort to avoid the police.

It would be a miracle if true. Zhang finds it hard to be optimistic. Her sister’s husband Zou Songtao died in prison, also for Falun Gong, and his body cremated without the family’s permission.

Over the course of a few hours MPs wandered outside to speak to the crowd, offering words of encouragement and support.

“I think it is one of the blights on our modern age that this is happening. I appreciate the fact that you come out and continue to remind us of this terrible tragedy that is occurring,” said Conservative MP Garry Breitkreuz.

Green MP Bruce Hyer said his party was “shocked and horrified at the behaviour of the government of communist China.

Former Secretary of State (Asia Pacific) David Kilgour was one of the early investigators of organ harvesting, co-authoring a report with human rights lawyer David Matas that sparked additional research and investigation into the practice.

He’s been a staunch human rights defender for many groups, and has travelled the world raising awareness about organ pillaging in China. He said prisoners of conscience are killed on demand for transplant organs in China today. No death sentence, no crime, just a belief.

“The sad truth is that participating doctors in China have led organ transplant medicine into the crime against humanity of killing other people for their organs,” he told the crowd.

Green Party leader Elizabeth May also came out to lend her voice, and her deputy leader, Hyer, made comments at Li’s press conference earlier.

Hyer demanded Harper go to China with “a real backbone, a real heart, and a real commitment to protecting the lives of not only the Falun Gong, but all of the Chinese people.”

“In China we now have a government which combines the worst of communist totalitarianism and unbridled, greedy capitalism in a quest for the almighty dollar and absolute power,” he said.

“We call upon Prime Minister Stephen Harper to stand up for not only these people, but for forbearance, for compassion and for truthfulness.”