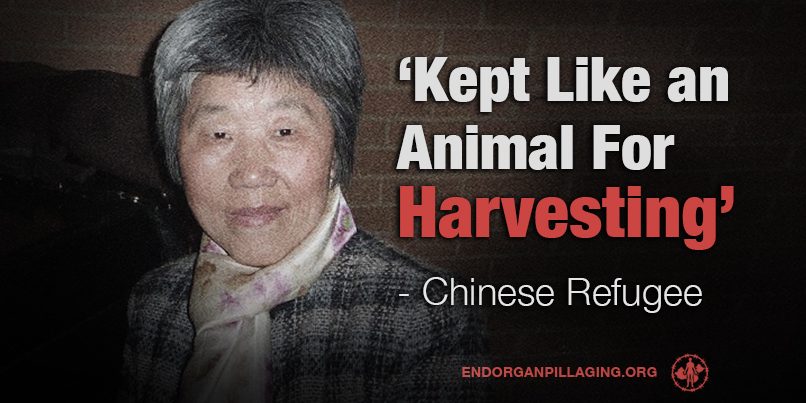 Ms. Tian, a 71-year-old political asylee from China, once spent a week tied to a hospital bed, silently wondering every day whether that day would be the one that doctors came to wheel her away, sedate her, and remove her heart and vital organs and sell them.

She now lives in Philadelphia and recounted the story to an Epoch Times reporter in a recent series of interviews.

Ms. Tian is a practitioner of Falun Gong, a traditional Chinese spiritual practice that has been persecuted in its homeland by the communist regime for the last 15 years. Tian says that the practice helped her recover from the debilitating aftereffects of a cerebral concussion she suffered years previously.

“Falun Gong teaches us to behave according to the principles of truthfulness, compassion, and forbearance as we live our lives—to be good people wherever we go. My spirits were greatly lifted—such a good practice. I wanted to share it with the world,” Tian said.

In 1999 the discipline came under sudden and severe persecution. In part, the regime leader at the time, Jiang Zemin, thought it had attracted too many people (between 70 and 100 million Chinese practiced Falun Gong in the late 1990s) and launched a violent campaign of eradication.

Tian traveled to government offices in Beijing to defend the practice and attempt to convince the authorities their campaign was a mistake—to no avail. In 2006, she was arrested while handing out flyers about the practice and its persecution in China. She was sent to a forced labor camp—that’s when her nightmare, and brush with death, began.

“One day 10 guards came for me in the labor camp, put a black hood over my eyes and shoved me in a police car. I didn’t know where they were going to take me… we went somewhere, and they brought me upstairs, and when they took the hood off I found I was in a hospital room. They put me onto a bed and cuffed me to it by the hands and feet.”

A female police officer later came in and unlocked her handcuffs. Then a doctor came in, tested her health, and said to the police before leaving “everything is normal,” Tian said. She was cuffed again. When another nurse came in to set up an IV drip, Tian began explaining her situation: “I’m a Falun Gong practitioner. I’m quite healthy and don’t need any infusions.” The nurse was sympathetic and didn’t set up the IV.

But later, another nurse came who forcefully injected her with an unknown substance. “After I was injected with this I felt terrible,” she said.

Police kept watch over her 24 hours a day, in shifts. Every morning a Chinese woman, apparently a doctor, dressed in a white smock and a white hat, would come in and test her blood pressure, heart function, and health. This was the only time Ms. Tian would be able to freely move her arms and legs. This doctor again said “everything is normal,” when leaving. She was again injected with an unidentified substance, putting her into a prolonged “dizzy” state.

What is this place, why am I being kept here?

Tian once asked a police guard: “What is this place, why am I being kept here?” The guard’s stern face revealed nothing.

One day she overheard a conversation between a female police officer and what sounded like a male voice on the telephone. The officer was asked where she was, and she responded “I’m in the heart disease ward.” Tian remembered being confused and shocked, thinking to herself: “So this is the heart disease ward? What on earth am I doing in here?”

The only people she saw every day were the police and nurses that came to set up the IV—none of those around her would explain where she was being kept or why.

Her strangest experience was probably when she awoke to find a man in her room, walking back and forth in front of her bed, apparently sizing her up. “Who are you?” she asked. He was surprised, and said “I… I’m a nurse. I’m here looking after my family.”

She began telling him that she was a Falun Gong practitioner that had been detained, sent to forced labor camp, and now somehow wound up in a hospital room. A police guard burst in and loudly told her to shut up and the man to leave.

The two went onto the balcony and she heard the police woman say: “Her body is especially good, it’s just that her brain has been knocked around.” Tian remembers thinking to herself: “They’re obviously talking about me; why is that strange man so interested in me?”

Tian recalls that as the man left he looked at her with the queerest of expressions, “like he was looking at an object, not a person.”

She said that it was around this time that the predicament she was in came together in her mind: “At the time the constant intravenous injections made me suffer terribly, and I thought it was extremely strange. If a doctor was coming every day to report that everything was normal, then why was I being kept in this hospital-like place? And why were they injecting me?”

She continued: “I wondered how such a strange thing could happen. I also remembered before I was sent to forced labor, about the stories that had just come out about Falun Gong practitioners at the Sujiatun hospital in northeast China being killed for their organs.

Have I become part of their organ market ‘inventory’?

Am I being kept like an animal for harvest?

“And I also recalled how I knew a young, healthy Falun Gong practitioner named Li Mei, 28, who mysteriously died after being arrested. When her family saw her body it had incisions beginning under her chin. And then, no one knew why, her body was forcefully cremated. When I thought of all this I started shaking. Have I become part of their organ market ‘inventory’? Am I being kept like an animal for harvest?”

She was barely able to sleep that night. In the morning when the doctor came for the usual check up, after removing the handcuffs, Tian used the chance.

“I started resisting straight away, doing everything I could to stop them from cuffing me again. I also started screaming: ‘You want to kill me! You want to harvest organs from a living Falun Gong practitioner!’

“I don’t know where the power came from, but I also lifted up the bed and placed it between myself and the police, making a lot of noise. Patients in the rest of the hospital were shocked and started coming in the room to see what the commotion was about. Before long the room was full, and the police left to get reinforcements.”

Tian then started explaining Falun Gong and the persecution against it to the other patients, as well as the fact that she’d been kidnapped and was being kept for her organs.

A nurse is going to come and give you some medicine. You must let him do the injection.

During the commotion, one of the other doctors at the hospital approached her and quietly told her that she mustn’t go with anyone that night, but that he was on shift and would help. “A nurse is going to come and give you some medicine. You must let him do the injection.”

Soon, four police came back, ejected the other patients, and again restrained her on the bed.

That night, a nurse indeed came to give her an injection. “I right away thought this was different from the injections previously. I immediately felt better, and the pain went away.”

This nurse somehow made it seem that her health had suddenly deteriorated, securing Ms. Tian’s release from the hospital.

The following day, another nurse came, began doing the check, and frowned: “Yesterday you were fine. Why are you suddenly like this?” Another nurse had the same reaction. She was immediately sent back to the labor camp.

Her ordeals were not quite over. The guards there said “your organs are bad—we don’t want you!” and injected her with what she said was a poison. Their intention was for her to be sent home and die, she said.

Her husband picked her up, and she spent weeks in bed with a feeling that her bones had turned to ice. “I can’t die,” she told herself.

She practiced Falun Gong exercises, forcing herself to do the standing movements and the seated meditation. Her sweat was yellow, she said. In about a month, she recovered, later managing to escape to the United States.

Ms. Tian has lived in Philadelphia, where she told this story, for the last two years.