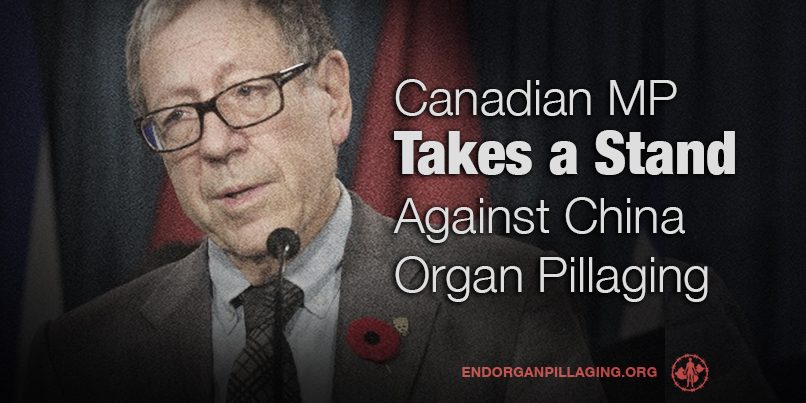 OTTAWA—Liberal MP and former Minister of Justice Irwin Cotler rose in the House of Commons on Feb. 19 to give voice to demands that the Chinese regime end its practice of killing prisoners of conscience and harvesting their organs.

Cotler, the Liberal Party’s critic for rights and freedoms and international justice, tabled six petitions on behalf of some 3,000 Canadians concerned about forced organ harvesting by the Chinese Communist regime.

In December 2013, Cotler also tabled a private member’s bill to restrict organ harvesting but would need government support to see it more forward.

The petitions called on the Canadian government to implement measures to push for an end to the Chinese regime’s practice of killing Falun Gong practitioners for their organs. They also call for changes to Canadian legislation, like those tabled by Cotler, to combat forced organ harvesting.

The petitions urge the Canadian government to call on the Chinese regime to end the practice of forced organ harvesting. According to a series of investigations dating back to 2006, many of those killed are Falun Gong adherents jailed for their spiritual beliefs. Investigative journalist Ethan Gutmann detailed some of those cases in his recent book “The Slaughter: Mass Killings, Organ Harvesting, and China’s Secret Solution to Its Dissident Problem.”

The Canadian government has raised the issue at the United Nations on China but the petitioners are calling for further action.

“Forced organ harvesting has resulted in the deaths of some tens of thousands of prisoners, as documented by experts Ethan Gutmann and Damon Noto, international human rights lawyer David Matas, former Canadian Secretary of State (Asia-Pacific) David Kilgour, and the organization Doctors Against Forced Organ Harvesting,” reads a statement from Cotler.

The MP has worked with members from other parties to research the issue at the Foreign Affairs Subcommittee on International Human Rights, of which he is vice-chair.

The subcommittee has expressed “deep concern over credible allegations that prisoners of conscience and members of religious and ethnic minority groups in the People’s Republic of China”—particularly Falun Gong practitioners—”are being executed for the purposes of harvesting and transplanting their organs.”

“I am pleased to stand in solidarity with these petitioners and with the many Canadians who are horrified by this brutal assault on human rights,” said Cotler.

“I urge the government to pass legislation along the lines of my Bill C-561, which would further restrict organ trafficking, and to raise this issue with Chinese officials at every opportunity.”

Forced Organ Harvesting from Prisoners of Conscience: the Intersection of Medical Advocacy and Medical Ethics by David Matas
October 29, 2020

‘Gandhi and Human Rights, the Modern Context’ by David Matas (Talk prepared for presentation to The India Centre, University of Winnipeg)
October 12, 2020