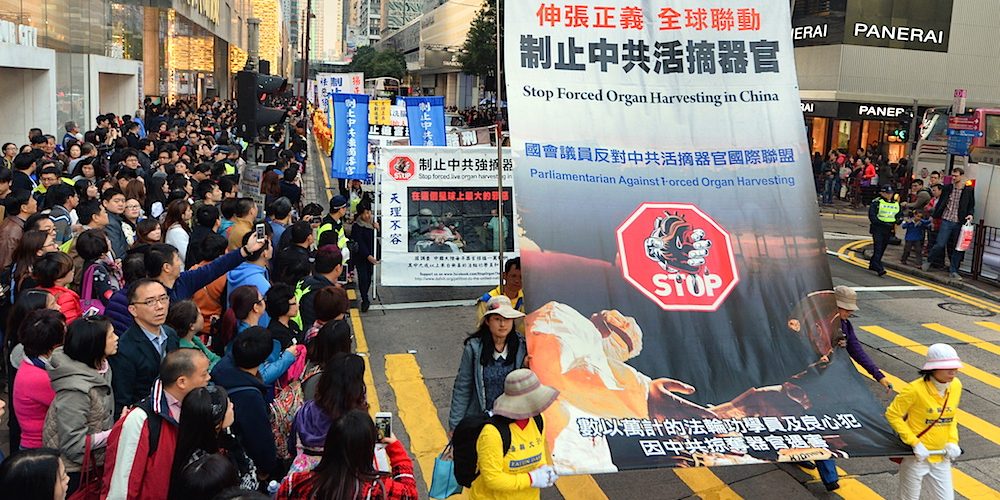 HONG KONG—On the weekend of Jan. 17, Falun Gong practitioners gathered in Hong Kong to share with one another their experiences with the spiritual discipline and to hold a parade to educate the public about how individuals who share their beliefs are persecuted in mainland China.

Falun Gong has been persecuted by the Chinese Communist Party (CCP) for 15 years. Since Hong Kong Chief Executive Leung Chun-ying took office in 2012, he has increasingly sought to suppress Falun Gong in accordance with the CCP’s wishes.

A march opposing the persecution of Falun Gong was held prior to a rally, at which many Hong Kong residents spoke, condemning the Chinese regime’s treatment of practitioners and praising Falun Gong’s principles of truthfulness, compassion, and tolerance.

Teresa Chu, a spokesperson of theTaiwan Falun Gong Human Rights Lawyers, said at the rally that in the new year of 2015, we are walking into a new era in which evil will not triumph.

“From 2013 to 2015, the number of signatures collected worldwide to oppose organ harvesting has reached 1.7 million people, including a joint declaration of 8000 doctors,” Chu said.

Chu explained that there are concentration camps in various parts of China that harvest the organs of Falun Gong practitioners to sell as transplants. She said that according to research, “the CCP is cleaning up all those members, officials, doctors, and medical workers who have participated in live organ harvesting.”

She called on those who have participated in the atrocity to come out to testify.

“If you want to leave yourself a way out, I hope that you come out to expose the locations of the concentration camps and expose those crimes. We will try with all our might to save you, to leave you a way out,” she said.

“I really hope that today’s parade and future parades can enlighten more compatriots from the mainland. Everyone should oppose the persecution, fight for democracy, and end the one-party dictatorship,” Lee said.

“The essence of Chinese culture has a long history, so I feel that the spirit of truthfulness, compassion, and tolerance is a very important moral and social factor for the building of the society,” Wu said.

He condemned the CCP’s crime of organ harvesting. “Using illegal means to obtain human organs as a means of commercialization, slaying them alive, is totally against the most basic human rights and justice.”

Neighborhood Workers Service Centre member Leung Yiu-chung strongly denounced the persecution of Falun Gong practitioners: “It is a violation of human rights, and it is even strongly condemned internationally.”

Leung also believes that the more people who quit the CCP, the better.

Mr. Wu, an investor from Shanghai, had just finished shopping when he came upon the march. He used his mobile phone to record it, while explaining to his girlfriend what he saw.

“This is more attractive than shopping discounts; I didn’t expect to see a Falun Gong parade, and I have gained a lot this time,” he said.

“It is so shocking, really an eye-opener! I’m speechless from the excitement,” Mr. Wu said.

He described the parade as magnificent and able to speak the truth to people’s hearts.