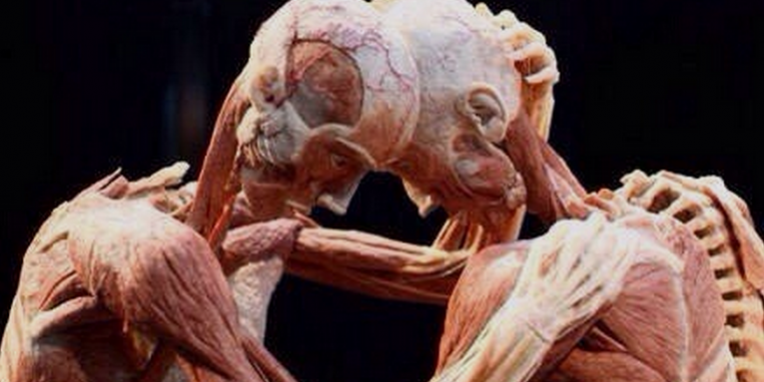 Many people have heard of the bodies exhibits that tour the world, showing viewers what the human body looks like on the inside. But most are unaware of the connection with the Chinese Communist Party.

Internet police in China just removed the photos below of plastinated bodies after a blogger posted them on Sina Weibo, a popular social media platform.

“In 2004, German magazine Der Spiegel published a report called “Merchants of Death” about a corpse plastination plant in Dalian that was linked with Gunther von Hagens.

“Also there were too many corpses in the facility. The article said von Hagens’ business was closely connected with the Dalian government, police department, local hospitals, and prisons. Only after former police chief Wang Lijun attempted to defect to the U.S. Consulate in 2012 was the factory actually shut down.”

Gunther von Hagens owns the “Body Worlds” exhibitions, and pioneered the plastination technique in 1977. He started publicly exhibiting preserved bodies in 1995, and became visiting professor at Dalian Medical University in 1996. The following year, he opened China’s first plastination research center in collaboration with the university.

In 1999, von Hagens founded Dalian Plastination Ltd., the city’s first corpse-processing factory. Bo Xilai, who was mayor of Dalian at the time, approved the facility, keen to find ways of expanding the local economy. That was also the year that the Chinese regime began persecuting Falun Gong, a popular meditation practice based on the principles of truth, compassion, and tolerance.

By 2001, Bo Xilai had been promoted to governor of Liaoning Province, and Beijing’s prisons and labor camps were overflowing with Falun Gong practitioners who were being arbitrarily arrested and tortured by police to make them give up their belief.

Meanwhile, von Hagens’ factory had become the world’s largest plastination factory with around 250 staff working on all the bodies, and conducting research.

However, the exposé by Der Spiegel drew global attention to what was going on in Dalian, so von Hagens started to extricate himself from the situation.

These days, von Hagens claims to source his corpses from donors in North America and Europe who have pledged their bodies to his cause after they die.

But even though his factory in China has supposedly only been plastinating animals in recent years, several copycat factories are still operating there, and selling bodies. In particular, “Bodies: The Exhibition” has toured different parts of the world, and now has to provide a disclaimer because it’s likely the corpses came from the Chinese police.

These photos were censored on Weibo. (Image: HKU)