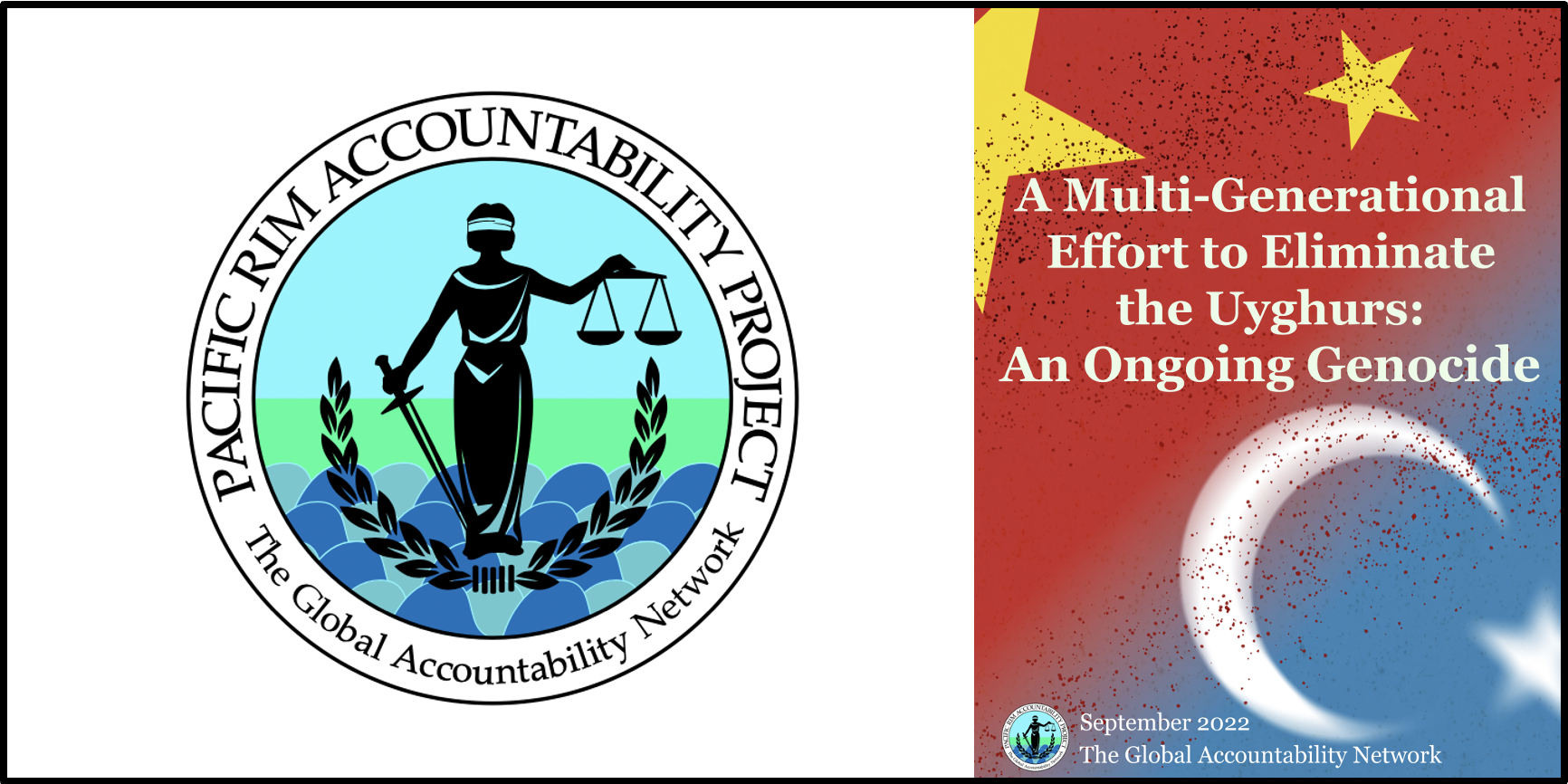 The Global Accountability Network’s Pacific Rim Accountability Project have just released an extensive white paper on the Uyghur situation in China. Titled A Multi-Generational Effort to Eliminate the Uyghurs: An Ongoing Genocide the paper draws attention to crimes committed against the Uyghur population in Xinjiang/East Turkestan, including forced organ harvesting.

Many human rights activists and experts report that prisoners are being murdered for their organs.(233) Researcher, Ethan Gutmann, believes around 25,000 people in Xinjiang are murdered every year for their organs.(234) According to Gutmann: “The Chinese Communist Party first experimented with the live organ harvesting of death row criminals on the execution grounds of Xinjiang as early as 1994. By 1997, surgeons were extracting livers and kidneys from Uyghur political and religious prisoners for high-ranking CCP cadres—small-scale, but it set a precedent.”(235) In more recent years, the practice has expanded as the CCP “targets a number of ethnic, religious, or linguistic minorities such as Falun Gong practitioners, Uyghurs, Tibetans, Muslims and Christians held in detention at different locations.”(236)

Another researcher, Matthew Robinson, said there is a direct link between Uyghur incarceration rates and the rise in organ transplants.(237) According to Robinson, “reports have emerged of Uighurs [sic] being subjected to blood tests and other medical examinations consistent with those required to assess organ health, which is a prerequisite for organ matching and transplantation.”(238)

A letter from a number of UN Special Rapporteurs and human rights Working Groups sent to the Chinese Government details the information received on forced organ harvesting:

It is alleged that lists of prisoners’ names are maintained for the purpose of forced organ harvesting at the detention centres. Further, it is alleged that if prisoners or detainees are hospitalized, they are at risk of forced organ harvesting. The most common organs removed from the prisoners are allegedly hearts, kidneys, livers, corneas and, less commonly, parts of livers. This form of trafficking reportedly involves health sector professionals, including surgeons, anesthetists, and other medical specialists.

It is further alleged that prisoners or detainees who belong to the aforementioned ethnic, religious or linguistic minorities [Falun Gong practitioners, Uyghurs, Tibetans, Muslims and Christians held in detention], are frequently arrested without being informed of the reasons for the arrest or provided with arrest warrants, and are subjected to blood tests and organ examinations, including ultrasounds and x-rays, without their informed consent. Such alleged practices are credible indicators of forced organ harvesting. The results of the examinations are reportedly registered in a database of living organ sources that facilitates organ allocation. It is also reported that some of these prisoners or detainees have been subject to enforced disappearances after their arrests.

The alleged practice of subjecting prisoners or detainees to frequent examinations without their prior informed consent was reportedly documented in a least the following facilities: female prison in Urumqi called “Sankan” (the No. 3 prison); No. 2 detention centre at Urumqi and Karmay prison.

It is also alleged that some prisoners receive death threats and threats of organ harvesting from the police, if they do not renounce their beliefs or refuse to cooperate with the police.(239)

Since 2000, the Chinese organ transplant industry has generated profits worth an estimated US$1 billion per year.(240) In one hospital, organ transplants grew from 60–70 a year in 2006–2007 to 200 a year in 2009.(241) It has been reported that the Chinese Government is going through “deliberate and extreme measures to hide any trace of the disappeared, including using chemicals to decompose bodies.”(242) As fast pass “green lanes” for organ transportation opened in airports in East China in 2016, nine new crematoriums were built in Xinjiang.243 Local Xinjiang crematoria reported burning bodies from detention centers.(244) When families asked why they were not allowed to see bodies of their deceased family members, burial administrators have used organ “harvesting” as an explanation.(245)

The Global Accountability Network report also outlines underlying crimes and includes forced organ harvesting in the crime of “killing members of the group”.

243 Ethan Gutmann, “The Killing of Innocents for Their Organs,” The International Coalition to End Transplant Abuse in China, 2012, at 17–21, https://endtransplantabuse.org/wpcontent/uploads/2021/08/TheKillingOfInnocentsForTheirOrgans_FOH_Xinjiang_EastTurkestan_byEthan Gutmann.pdf.

About the Global Accountability Network

The Global Accountability Network (GAN) is a collective of international criminal prosecutors and practitioners who supervise and work with law students on specific atrocity projects for Syria, Yemen, Venezuela, Ukraine, and Pacific Rim region. The students under the newly formed Pacific Rim Accountability Project (PRAP) of GAN are assigned to a section of the work such as investigations, research, and/or legal analysis regarding alleged war crimes and/or crimes against humanity. PRAP’s goals are to gather evidence that can one day help to form the basis for criminal prosecution and to make a qualitative analysis on the current crises throughout the Pacific Rim region.  https://www.globalaccountabilitynetwork.org/