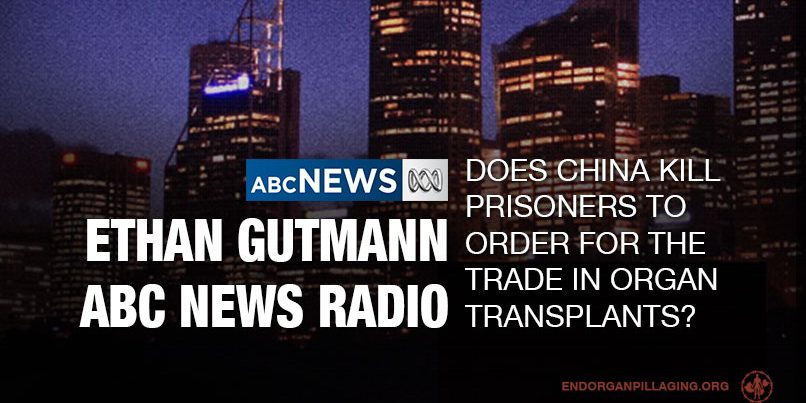 MARK COLVIN: Does China kill prisoners to order for the trade in organ transplants?

Six weeks ago the US House of Representatives passed a motion of concern about “persistent and credible reports of systematic, state-sanctioned organ harvesting from non-consenting prisoners of conscience”.

There have been reports of the killing of Uighur nationals, Tibetans, some Christians and adherents of the Falun Gong religious group.

Two years ago, China promised that it was about to stop harvesting organs from executed prisoners.

Ethan Gutmann is the author of The Slaughter: mass killings, organ harvesting, and China’s secret solution to its dissident problem.

He also features in a film called Hard to Believe, which premieres in Sydney this week.

I asked Ethan Guttman first whether China was still killing death row prisoners for their organs.

ETHAN GUTTMAN: I think the point is to get beyond that and look at prisoners of conscience. I mean, these are people who have done, in most cases, a crime that you couldn’t even sentence them to prison for in most countries.

MARK COLVIN: But before we get to prisoners of conscience. You go back to 2006. The BBC goes into a hospital and essentially asks for an organ and what is being offered is that a prisoner will be killed to order.

MARK COLVIN: Is that still going on?

MARK COLVIN: How can you prove that?

ETHAN GUTTMAN: The Chinese claim 10,000 transplants a year. We actually counted up all the hospitals which are doing transplants and you can even do this calculation for yourself. But even just looking at the 146 hospitals that are transplant centres authorised by the Ministry of Health, you come out with something over 50,000 a year.

Then you start looking at the big boys. Tianjin Central Hospital: 5,000 transplants a year. Beijing, 309 Hospital.

MARK COLVIN: What, you know this?

ETHAN GUTTMAN: We know this.

ETHAN GUTTMAN: Well, there’s 500 beds that are dedicated to transplant patients in Tianjin Central, this is all their own literature. This is the Chinese literature, it’s the stuff that they never expected that anybody in the West would look at.

MARK COLVIN: So you’ve just been going through the small print.

MARK COLVIN: Let’s just focus in on the one hospital, Tianjin hospital. You say there are 5,000 transplants a year. How many do they say?

ETHAN GUTTMAN: They don’t actually give a number, what they do say is that we have 500 transplant beds, it’s actually 750 now. We have 500 beds that are dedicated to transplants. Now, they say well what’s, how long do people stay?

Well they say about 20 days, 20 to 30 days. What’s their occupancy rate? Well they’re very clear about that. They said for several years it was 131 per cent. In other words, they said we are taking out hotel rooms to accommodate our patients. Now they claim 100 per cent. Well that’s a fairly easy calculation. We’re looking at 5,000 transplants a year from this one hospital alone.

MARK COLVIN: Then focus out again. If you take that hospital then you multiply it by all the other hospitals.

ETHAN GUTTMAN: Oh I wouldn’t do that…

MARK COLVIN: No no, but you’ve gone through, you’ve added all this up.

MARK COLVIN: And what you’re saying about that 100,000 is that they cannot reach that with voluntary donors.

ETHAN GUTTMAN: Not even close. Even the Chinese aren’t claiming anything like that. They’re claiming 7,000 voluntary organs out there right now. I don’t even believe that number.

But even if it were true, it’s not enough, and at the same time we’ve been picking up this evidence for years of refugees coming out and saying they examined my eyes but it turns out it’s not a real eye exam, they just look at the corneas and they don’t do a peripheral vision test or anything else, nothing involving actual sight or vision because we can’t transplant brains yet, we can only transplant the corneas.

They do extensive blood test work. These are people who are beaten, tortured almost to the point of death, they don’t bother with those kinds of wounds, they just look at the health of the organs.

MARK COLVIN: Who are the people who are telling you this?

ETHAN GUTTMAN: Well it’s not just the Falun Gong it’s also the Uighurs, the Muslims of north-west China, who’ve been in a very hot situation with the Chinese for some time, and the Tibetans as well.

MARK COLVIN: And when you get these accounts, obviously one of the things that any journalist does is to try and cross index if you like the kind of details that they give. How does that stack up?

ETHAN GUTTMAN: Well that’s pretty interesting because we do have a couple of doctors who’ve come out on the record. So we have that, we also have the now mayor of Taipei, Doctor Ko Wen-je, who went to China to look for organs, to suss out the situation, the organ situation for his clinic.

And he wanted to talk to the doctors about prices among other things at this hospital, he wanted to see if he could get the Chinese price, not the foreigner price for organs. And they got to know him a bit, they liked him, and they said okay look we know you’re, we’re gonna give you the Chinese price and they said we also know you’re pretty concerned about these organs coming from prisoners, because you know they’re a lot of drug addicts and these people live hard lives.

We want to assure you all these organs are coming from Falun Gong. These people, they don’t drink, they don’t smoke, they’re very health really. So…

MARK COLVIN: So, in December 2014 the Chinese state media reported that the country had promised to stop harvesting organs from executed prisoners by the beginning of 2015. Is there any indication that they did that?

ETHAN GUTTMAN: No, they don’t even actually truthfully claim that because a Huang Jiefu, who is the sort of master of ceremonies for the West of what’s going on in the transplant environment in China, you know, basically he has been saying one thing to the West and to Reuters and AFP and so forth and then he turns around and says something completely different to the Chinese press.

To the Chinese press he says well actually, you know, prisoners can donate their organs. Donation in prison isn’t actually a donation, it’s a very suspect idea.

MARK COLVIN: People in Australia who have kidney problems for instance, there’s a very long waiting list and people suggest to you that maybe you should go somewhere like China and get an organ. What would you say to somebody who was thinking of doing that?

ETHAN GUTTMAN: Having, you know, seen both my parents die recently I recognise it’s a wrenching, wrenching choice, but it’s impossible to join in. This is a slow motion genocide.

MARK COLVIN: Ethan Guttman, author of The Slaughter. The film Hard to Believe premiers in Sydney this Wednesday. You can hear a longer version of that interview on our website from this evening.