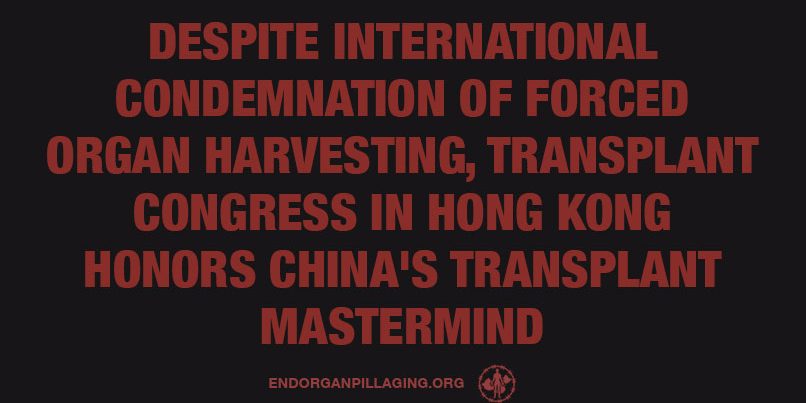 Despite mounting international concerns, TTS has booked China’s leading transplant expert, Huang Jiefu, as a plenary speaker at the upcoming transplant congress. Huang previously stated that up to 90% of China’s transplant organs were harvested from executed prisoners. Under his tenure as deputy minister of health, China’s transplant numbers grew exponentially, coinciding with the nationwide outbreak of persecution and detention of prisoners of conscience after 1999, and reports of forced blood testing and medical examinations of detained Falun Gong practitioners targeted for their beliefs.  Huang himself performed more than 500 liver transplants.

As the leading body of international experts in organ transplantation, TTS bears the professional responsibility to investigate credible allegations of forced organ harvesting from prisoners of conscience in China, especially in light of the  U.S. House of Representatives’ unanimous passage of House Resolution 343, and the European Parliament’s adoption of Written Declaration 48.

A new report by independent investigators David Kilgour, Ethan Gutmann and David Matas concludes that the volume of annual transplants in China is larger than officially stated, indicating that transplant figures provided by Chinese officials are false and mislead the international community. This March, DAFOH estimated that more than 100,000 Falun Gong practitioners were subjected to forced organ harvesting over the past 16 years.

TTS has the professional and ethical obligation of due diligence, and a moral responsibility to respect international concerns. The Society should establish, beyond doubt, that no prisoners of conscience are being killed for their organs in China. It is indefensible that while athletes are being rejected from participating in the Olympic Games in Rio for unethical doping, transplant surgeons who are suspected of crimes against humanity and may have the blood of the innocent on their hands, are welcome at a transplant congress.

Therefore, DAFOH asks The Transplantation Society to consider the mass of critical evidence, adhere to the ethical standards of the Society, reconsider its decision, and retract the invitation of Huang Jiefu to address the plenary at the upcoming congress.

Doctors Against Forced Organ Harvesting aims to provide the medical community and society with objective findings of unethical and illegal organ harvesting. Organ harvesting, the removal of organs from a donor, without obtaining prior free and voluntary consent, is considered a crime against humanity, as well as a threat to the integrity of medical science in general.