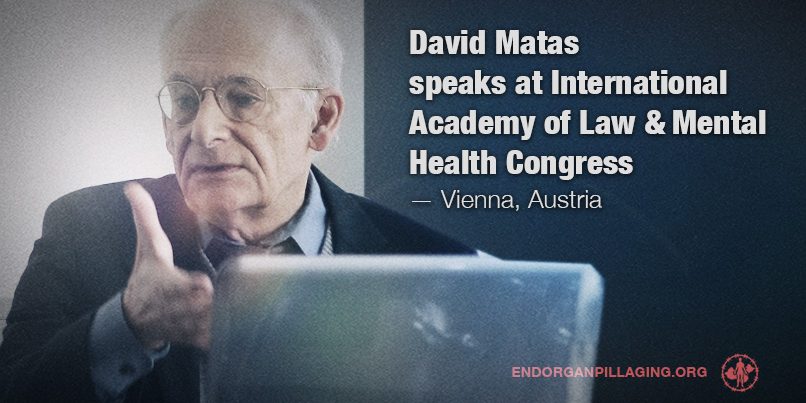 Before I launch directly into the topic of my talk, I want to say a bit about our location, Sigmund Freud University, in Vienna.

Over the centuries, the Jewish community diaspora in Europe was the victim of discrimination, not just in practice but in law. Jews could not attend universities, join professions, or work for the government. There were many locations where they could not live or even enter.

At the end of the nineteenth and the beginning of the twentieth century, many of these legal discriminatory provisions lifted and the Jewish community joined the general societies in the countries in which they lived. Some of them became quite successful in their chosen endeavours, no more so than in Austria in general and Vienna in particular.

Austria, at more or less the same time, was the source country of several Nazi leaders. Adolf Hitler was Austrian. So was Adolf Eichmann. There were many other Austrian Nazis whose names are not as well known as these two, but who were instrumental in the Holocaust. The mass killing of Jews physically took place mostly in Poland. It was led by Germany. But Austria was an incubator.

Austria juxtaposed then an extraordinary Jewish community achievement and virulent eliminationist antisemitic hatred. Adolf Hitler and Ludwig Wittgenstein, as young teenagers, even went to the same school in Linz at the same time.

Is this juxtaposition just a coincidence? I suggest not.

Because I have been actively involved in human rights work over long periods, I have become sensitized to the plight of disadvantaged minorities. One disadvantage leads to another; disadvantage accumulates. Disadvantage has to be attacked frontally and systematically.

Many of the mass atrocities of the twentieth and twenty first century have this factor in common; they were directed against a minority that the majority saw as advantaged. This was true, for instance, of the Tutsis in Rwanda, the Tamils in Sri Lanka, the ethnic Asians in Uganda at the time of Idi Amin, the ethnic Chinese in Indonesia at the time of the May 1998 riots and the middle class in Kampuchea at the time of Pol Pot.

Nobel Peace Prize winner and Holocaust survivor Elie Wiesel said:
“Think of the scientists, medical doctors, scholars, artists, musicians, poets, writers, astronomers, teachers and philosophers these children might have become had they been allowed to live … We will never know how many future Nobel Prize winners were among the children who perished.”

Well yes. Crimes against humanity are crimes against us all because of the loss to humanity from these crimes. Yet, this observation is blind to the linkage between accomplishment and the incitement to hatred which feeds on it.

If we want to combat genocide, it is not enough to point to what we lose by mass killings of communities with a concentration of accomplished members. We have to combat directly the incitement to hatred which distorts this accomplishment in order to serve the ends of the propagandists.

What has this got to do with transplant abuse in China? In my view, quite a lot. The victims of transplant abuse in China, according to research I, David Kilgour, Ethan Gutmann and others have done, are primarily practitioners of Falun Gong, a spiritually based set of exercises. The Communist Party of China initially encouraged the practice of Falun Gong because the exercises are beneficial to health and cut down on the bills of the health system. With that encouragement, the practice, from a standing start in 1992, spread throughout China and grew by 1999, in the space of seven years, to an estimated 70 to 100 million practitioners.

There were more practitioners than members of the Communist Party. There were 3,000 outdoor practice stations in Beijing alone. This popularity generated within the Party the suspicion, envy, jealousy, fear and hatred which have so often driven other atrocities and prompted a Party decision to suppress the practice.

The repression led to mass demonstrations. Practitioners of Falun Gong thought that the Party was mistaken, that they had misapprehended the nature of Falun Gong. They showed up in the hundreds of thousands with posters and banners stating “Falun Gong is good.”

Let me get even more directly to the topic at hand, ending organ transplant abuse in China through professional ostracism. Those of you who have followed my talks at this forum, the International Academy of Law and Mental Health, through the years will know that I have been inspired by this forum to draw on the example that the World Psychiatric Association gave when faced with Soviet Psychiatric abuse.

It is difficult, though, to draw an exact parallel between psychiatric and transplant abuse because of the different ways the two global professions are structured. The international transplant profession does have an international organization, The Transplantation Society. However, The Transplantation Society is not organized the way the World Psychiatric Association is.

The trouble with this parallel is that the abuse in the Soviet Union with which the World Psychiatric Association was concerned was not centred in a small subspecialty of Soviet psychiatry, but rather in Soviet psychiatry as a whole. The Chinese Medical Association, in contrast, has about 500,000 members from about two millions doctors and assistant doctors in China. Transplantology is one of eighty five specialties under its umbrella. Transplant professionals are a small percentage of the membership of the Chinese Medical Association.

What would those other steps be? The Transplantation Society, as one might expect, has been sensitive to this problem. Shortly after the report that David Kilgour and I co-authored, The Transplantation Society issued two ethics statements – one opposed to the sourcing of organs from executed prisoners and the other discouraging contact or collaboration with Chinese transplant professionals engaged in transplant abuse.

While one can argue about the formulation of these policies, and I myself have done so, a more troubling question is how they were to be enforced. The Transplantation Society, to its credit, has not ignored the issue. There has been some attempt at enforcement. For instance, the Society refused to allow 35 Chinese participants for ethical reasons to attend the World Transplant Congress in San Francisco in July 2014.

International transplant experts stayed away from the 2014 Hangzhou, China transplant conference. A year before, in October 2013, the China Transplant Congress, also held in Hangzhou, had a raft of foreign expert attendees.

There is a Chinese transplant conference scheduled for 68 August 2015 at East Lake in Hubei Province at the International Conference Centre. In my view, the non-attendance which marked the 2014 Hangzhou conference should continue.

Avoiding collaboration has taken the form of avoiding training. Neil Laurie, Clerk of the Queensland Parliament, by letter dated November 1, 2006, sent a petition to Stephen Robertson, the Minister of Health for the Queensland Government in Australia, asking for an investigation of the forced organ harvesting from Falun Gong. The Minister of Health, on December 1, 2006 in response, wrote that the Prince Charles Hospital has “a policy of not training any Chinese surgeon in any transplant surgical technique’.

Yet, another form of distance has been refusal to publish research of Chinese transplant professionals using data garnered from organ transplant abuse. The Editors and Associate Editors of the journal Liver Transplantation, wrote in 2007 that they
“have decided that original publications dealing with clinical liver transplantation outcomes submitted to this journal should explicitly exclude the use of executed prisoners or paid donors as a source of donor organs.”

The American Journal of Transplantation issued as instructions to authors a new policy effective May 2011 which states:
“AJT will not accept manuscripts whose data derives from transplants involving organs obtained from executed prisoners. Manuscripts writing about this practice (e.g. an editorial or a report recounting the secondary consequences of this practice) may be considered at the discretion of the Editorial Board, but require a written appeal to the Board prior to submission of the manuscript.”

One form of ostracism is immigration control. US visa application forms from 2012 ask visa applicants this question: “Have you ever been directly involved in the coercive transplantation of human organs or bodily tissue?”

The likelihood of a person answering yes to such a question is small. The question all the same has a significant value, practical as well as symbolic. Those directly involved in the coercive transplantation of human organs or bodily tissue may well, in the face of such a question, be discouraged from applying for a visa.

Moreover, if the question is asked and a person directly involved in the coercive transplantation of human organs or bodily tissue lies on application, that lie can have legal consequences. An applicant for a visa can barred from entry on the basis that the applicant has foreclosed relevant inquiries. It is not necessary to establish that the inquiries, if made, would have led to a finding of inadmissibility on a ground other than the misrepresentation.

The Transplantation Society needs to develop criteria to determine whether its ethical standards are being met, criteria to determine whether Chinese transplant professionals should or should be allowed to attend The Transplantation Society events, whether the international transplant profession should or should not attend Chinese national transplant congresses. It also needs a monitoring structure to assess whether conditions it adopts are met.

The suggestions of conditions I have set out above are not etched in stone, though I think there is merit in each of them. My general point is that something is better than nothing.

Peer pressure may or may not work. But at the very least, the global transplant profession should not be complicit in any way in Chinese transplant abuse. That means not only clear standards, but also clear and effective mechanisms for their implementation.

Peer pressure as a vehicle for transplantation reform in China has disadvantages. Transplant professionals are after all not sinologists. They are not experts in Communist Party criminality, propaganda techniques, cover up and dissimulation.

When it comes to dealing with the Communist Party of China, transplant professionals are amateurs. We can not realistically expect a continually shifting cast of amateurs to solve on their own the deep seated problem in China of the killing of prisoners of conscience for their organs.

Since my involvement on the Chinese organ transplant abuse file since 2006, I have seen many changes both in China and abroad. Within China, the biggest changes have been driven by the local transplant profession, affected by global peer pressure. Global peer pressure is a lever for change in China we should make our best to use.