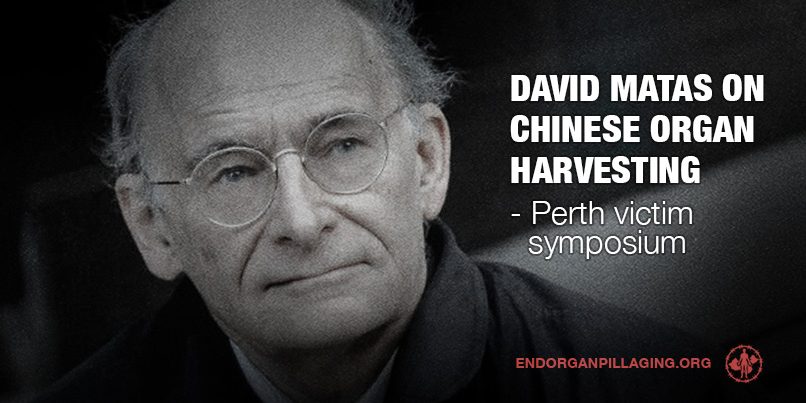 Western Australia’s politicians and business leaders are being called on to help stop the mass slaughter of China’s political prisoners for organ harvesting.

Human Rights Lawyer and Nobel Peace Prize nominee David Matas will talk at the 15th International Symposium of the World Society of Victimology in Perth on Tuesday.

Mr Matas is a renowned immigration and human rights lawyer who has been investigating and raising awareness of organ harvesting from live Falun Gong practitioners, a persecuted and banned religious group in China.

Falun Gong gained popularity in China in the early 1990s and by 1999 had tens of millions of followers.

But the ruling Communist Party saw it as a threat because of its size and independence and it was banned in mid-1999, suppressed in an often violent manner.

Practitioners taken prisoner are put to work in labour camps and countless have had their body parts removed while they are still alive.

Mr Matas, who after addressing the symposium will be speaking at the WA Parliament, said the treatment of Falun Gong in China was “the worst” in victimisation and human rights abuse.

“It may be tempting to go after violations which are easier to remedy because the Chinese Government is less intransigent and more open about them, but we have to think of the victims first rather than the malleability of the Communist Party,” Mr Matas said.

“Every contact with China is an opportunity to raise this issue and express concerns.

“I assume Western Australia thinks of its economic relations with China in terms of its economic own benefit, but of course it would be equally economically beneficial to China or China would not be engaged.

“One should take advantage of the fact that Chinese government and Chinese business place value in this relationship in order to pursue the advantage that relationship gives.”

Mr Matas said politicians could also take action by introducing compulsory reporting of transplant tourism and denying entry into Australia of people who have been complicit in organ transplant abuse.

“I think China needs Australia more than we need them — we’ve got a lot of natural resources that they are lacking,” Mr Lin said.

“We shouldn’t bow to another country in terms of human rights and human dignity because of trade.

“There’s still killing going on because as far as we know, people still go to China for transplants.”