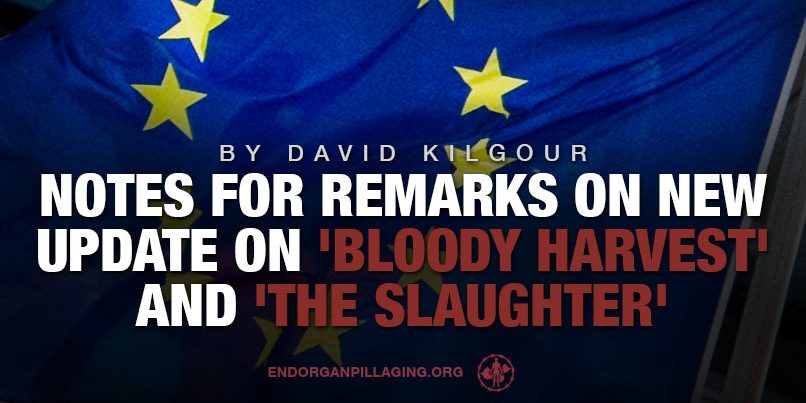 For at least 15 years across China, there has been regime-sanctioned pillaging and trafficking in the vital organs of prisoners of conscience—overwhelmingly from practitioners of Falun Gong, but also Tibetans, Uyghurs and house Christians—to fuel an immensely profitable but despicable commerce with wealthy Chinese patients and “organ tourists”.

Recently, the U.S. House of Representatives unanimously passed Resolution 343 condemning the practice and calling on the State Department to launch its own investigation on organ pillaging/trafficking in China.

The update you have on our books, The Slaughter (2014) and Bloody Harvest (2009), provides much primary source research, translated from Chinese, indicating that the scale of the organ transplant industry is much larger than previously perceived. Voluntary organ donation is extremely rare because cultural beliefs dictate that a person’s body must be buried intact. The other major source of organs—death row prisoners—cannot explain the volumes of transplants taking place. Other populations are being murdered in large numbers to supply the insatiable transplantation industry.

We provide considerable evidence of an industrial-scale, state-directed organ transplantation system, controlled through national policies and funding, and implicating both the military and civilian healthcare systems. Despite repeated requests from UN bodies, medical associations and other NGOs, Chinese party-state authorities have never explained the massive sourcing disparity at the heart of its transplant industry.

The U.N. Committee Against Torture as long ago as 2008 declared: “The State party should immediately conduct or commission an independent investigation of the claims that some Falun Gong practitioners have been… used for organ transplants and take measures, as appropriate, to ensure that those responsible for such abuses are prosecuted and punished.”

Arthur Caplan, an ethicist at New York University’s Medical Center, in 2012 co-initiated a petition asking the U.S. government to investigate the Chinese party-state’s practice of killing prisoners of conscience for their organs. He said: “… you can’t stay quiet about killing for organs. It’s too heinous. It’s just too wrong. It violates all ideas of human rights.” Who can disagree?

All this makes the position of some key players in the international transplantation scene difficult to understand. For the past 10 years, the leaders of The Transplantation Society (TTS), which incorporates most of the professionals practicing organ transplantations, have persistently and inexplicably turned a blind eye towards the mounting allegations on the use of organs from prisoners of conscience in China, and have elected to concentrate on – and prematurely praise – the unsubstantiated declarations of the end of use of organs only from prisoners “formally” sentenced to death.

Kirk Allison, director of the Program in Human Rights and Health at the University of Minnesota, notes: “This kind of curiosity matters. First, because truth matters; moral hazard matters; human rights matter; and the lives of the exploited, even if dead, matter. They have a moral claim on us.”

Dr. Jay Lavee, the respected Israeli heart surgeon, president of the Israel Transplantation Society, and major architect of Israel’s law banning the use of trafficked organs, wrote: “I feel embarrassed that my colleagues worldwide do not feel, like me, the moral duty to request China to open its gates for an independent, thorough inspection of its current transplant system by the international transplant community.” He added: “As a son of a Holocaust survivor, I feel obliged to not repeat the dreadful mistake made by the International Red Cross visit to the Theresienstadt Nazi concentration camp in 1944, in which it was reported to be a pleasant recreation camp.”

Israel and Taiwan are today beacons for rule of law countries whose elected leaders now have the political will to ban transplant tourism at their national and/or state levels.

Legislators amended Taiwan’s Human Organ Transplant Act in June 2015. The Act now stipulates that patients who obtain organ transplants overseas must provide legal proof of the source of the organs in order to be eligible for medical care in Taiwan. Taiwanese are now prohibited from going to China for organ transplants.

The legislation stipulates that organs must be provided without any form of compensation. If those who purchase transplant organs overseas are found guilty of receiving a trafficked organ, the maximum sentence is five years. Taiwan levies a maximum fine of approximately (US) $49,000 on persons convicted. Additionally, doctors involved in illegal organ transplants can lose their licenses.

“The Act clearly forbids organ trafficking…transplant tourism–and stipulates penalties. It also bans the use of organs from death row prisoners…” said Tien Chiu-chin, a Taiwanese legislative and sponsor of the measures.

The ‘State Crime’ and closing chapters in our update contain a number of good policy recommendations;   Most importantly, this ongoing crime against humanity must cease and those involved must be brought to justice in China or, presumably at some point at the International Criminal Court;
The United Nations, led by America, Canada and other like-minded member-states should undertake an independent investigation into organ transplant practices in China.
‘Organ tourism’ to China should cease being shielded by medical confidentiality and be monitored by health systems in all nations;
Reconnecting the Chinese and international transplant communities should depend on:
• a commitment to bring to justice all perpetrators of past organ transplant abuse across China and the laying of charges against them;

• expulsion from the Chinese Medical Association of transplant professionals who cannot establish that their sourcing of organs is legitimate;

• publication of present and past death penalty statistics for China;

• public access to the past and present aggregates of the four Chinese transplant registries: lung, liver, heart and kidney;

• cooperation with an outside, independent verification system for compliance with international standards; and

• repeal of the 1984 law which allows for organ sourcing from prisoners across China without either their consent or the consent of their families.

One of the best analyses of contemporary China is The Party (2010), by Richard McGregor, formerly Financial Times Beijing bureau chief. “Terror”, he notes, “was the system for extended periods of Mao’s rule… (it) remains essential to the system’s survival and is deployed without embarrassment when required.” He adds: “China is deeply corrupt…Since 1982, about 80 per cent of the 130,000 to 190,000 officials disciplined annually for malfeasance by the Party received only a warning. Only 6 per cent were criminally prosecuted, and of them, only 3 per cent went to jail.” Ending hugely profitable organ pillaging/trafficking in such a governance model is a major challenge for both citizens and foreigners?

John Bruk, founding chair of the Asia-Pacific Foundation of Canada, recently addressed Canadians who say our country must not upset the party-state in Beijing on any matter, inviting them to- “..reflect on the failure of successive Canadian governments to develop a winning strategy for trade with China, resulting in our trade surplus with China of $1.6 billion in 1988 reversing to a deficit of $45 billion – and growing – by the end of 2015. Will the government please tell us how have we been paying off those deficits with China that, combined, exceed $400 billion, and how we will continue to pay for those increasing deficits with China…? (Is the only way to) sell core assets to government of China-owned corporations and destroy the basis of our prosperity…?”

The ongoing murders across China of prisoners of conscience and other innocents for their organs indicated in this update fit the patterns of King Leopold’s Congo, the Cambodian, Rwandan and Darfur genocides and the Holocaust. Business as usual with Beijing is accordingly not ethically defensible. A response to the overwhelming evidence provided by our update from the party-state in Beijing is required.

If President Xi Jinping ends systematic organ pillaging and trafficking from prisoners of conscience, the rest of the world could perhaps again enjoy normal bilateral relations with China.

READ THE UPDATE TO ‘BLOODY HARVEST’ & ‘THE SLAUGHTER’