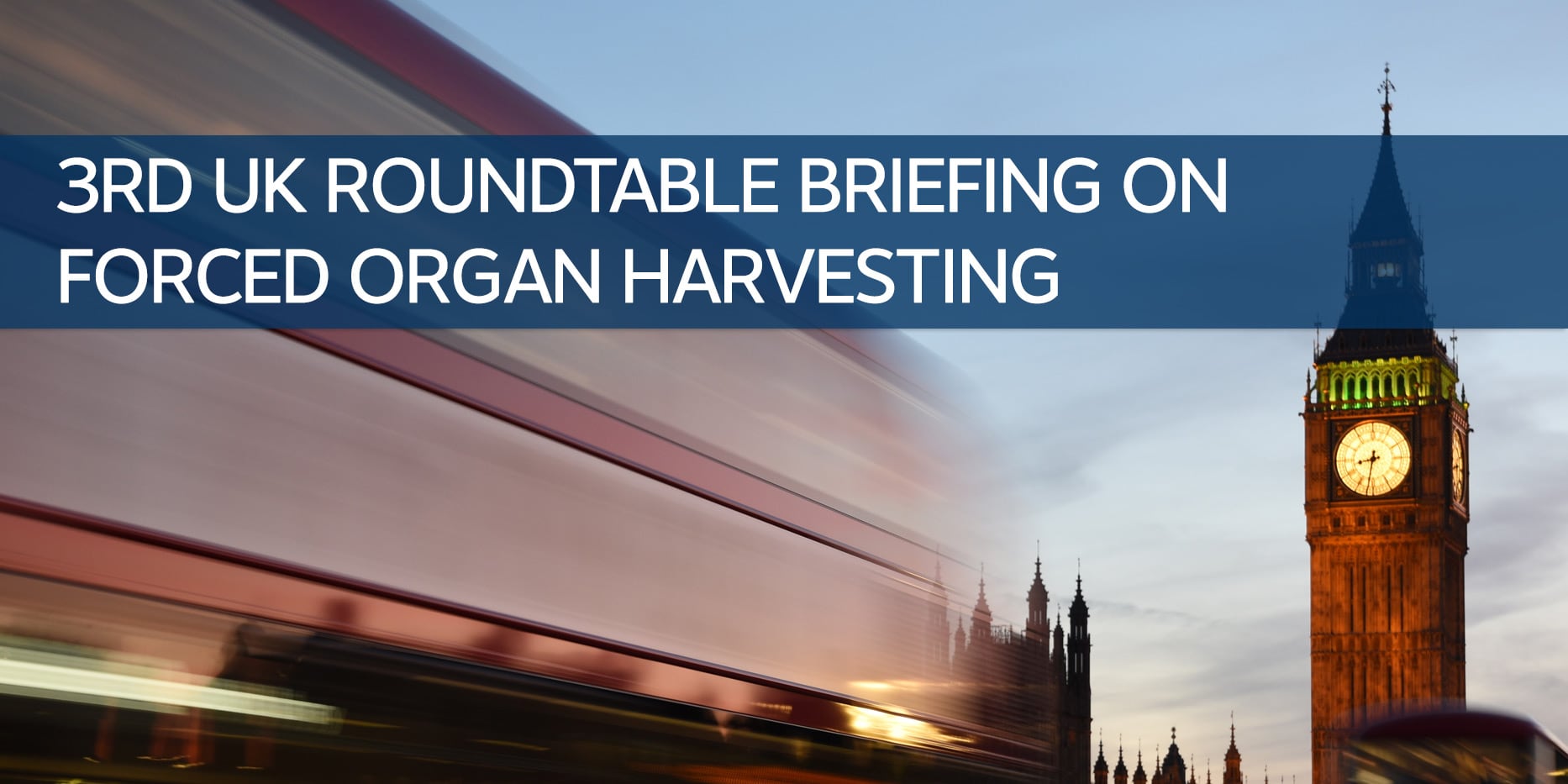 On Tuesday 16th October, The UK Parliament held an event on organ harvesting from prisoners of conscience in China. Hosted by Jim Shannon MP, and Chair of the All Party Parliamentary Group for International Freedom of Religion of Belief. This was the third event inside the last 12 months,  listening to evidence from from Lord Alton of Liverpool, Senior Medical professionals and leading academics.

During the event, ETAC (the International Coalition to End Transplant Abuse in China) announced that there will be an independent people’s tribunal beginning in December to inquire into organ harvesting from prisoners of conscience. The aim of the tribunal, which will be chaired by Sir Geoffrey Nice QC, will be to asses and look at all the available evidence which has posed unanswered questions, cause for concern and the belief, among activists that large scale illegal organ transplant activity has and continues to take place in China.

Tuesday’s event heard troubling accounts from Dr Harold King, from DAFOH (Doctor’s Against Forced Organ Harvesting), where he explained the similarities between the persecution of Falun Gong and a new form of ‘cold genocide’. Falun Gong has been persecuted in China since 1999, and Dr King surmised the persecution, from the perspective of a genocide, the declared intent of previous CCP Chairman Jiang Zemin ‘to destroy’ Falun Gong and the steps which have been taken to normalise this crime against humanity within Chinese society.

Lord Alton of Liverpool and Dr David Nicholl also shared their concerns about a recent exhibition called ‘Real Bodies’, which was on display in Birmingham’s NEC. The shared concerns stem from the belief that the corpses which have been trafficked into and out of the UK for a commercial gain are actually those of unwilling prisoners of conscience. During Lord Alton’s speech he questioned “why is the Britain allowing the bodies of unknown Chinese citizens – who may have been victims of torture, human rights violations, persecution or organ theft – to be turned into a travelling circus?”

And David Nicholl, a Consultant Neurologist, Honorary Senior Lecturer and respected human rights activist led the call for UK legislation, regarding the licensing of exhibitions like the Real Bodies, to be updated to prevent exhibitions like this from coming back to the UK.

In total 8 speakers came together to voicing their concerns and continue the call for allegations of forced organ harvesting to be fully investigated.

The event was attended by MPs, Professors, Lawyers, International Human Rights Lawyers and representatives of many NGO’s including Hong Kong Watch, Christian Solidarity Worldwide, World Uyghur Congress and the UK Uyghur Committee.  With the announcement of December’s people tribunal and the continued efforts involved with yesterday’s event it remains to be seen if and what the UK government will decide to do next. The compelling evidence on display, along with the growing voices of concern from Uyghur, Christian, Tibetan and Falun Gong communities are hard to ignore.