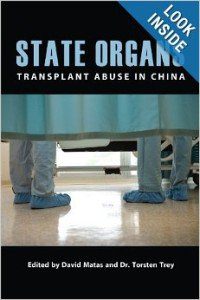 The purpose of medicine is to provide care for those who suffer. The Hippocratic Oath commits medical doctors to not do harm. Giving a lethal drug to anyone or advising such an action violates that oath. Yet, in China, we can see that this ethical principle is violated by the taking of organs from prisoners, including prisoners of conscience. These prisoners of conscience are mostly practitioners of Falun Gong, but also include Uighurs, Tibetans and others.

While organ transplant abuse exists in many countries, China presents a unique situation, a country where state institutions are heavily implicated in the abuse. How do we stop the killing in China of innocents for their organs?

There appear to be three basic answers to that question. One is to end the persecution against a particular group such as Falun Gong, which was banned in China in 1999 because the then leader of the Communist Party, Jiang Zemin, feared that its popularity would threaten the ideological supremacy of the Party. The second is to end the network of slave labour camps in China, euphemistically called “re-education through labour camps”, where detained Falun Gong are mostly housed and which have become vast forced organ donor banks. The third is to end the killing of prisoners for their organs in general. End the killing of all prisoners for their organs, and then the killing of prisoners of conscience for their organs would inevitably cease.

Human rights advocacy is an effort in mobilization. It is easy enough to say that human rights belong to all humanity. However, getting people to do something about it is not so easy. Yet, as Greek lawmaker Solon noted over two thousand five hundred years ago, we shall succeed in ending injustice and abuse when those who are not the victims are as outraged about the injustice and harm as those who are the victims.

Parliamentarians, media, ethicists, international human rights organizations, international lawyers, government foreign affairs officials, human rights educators and intergovernmental human rights officials all ought to be allies in the effort to combat organ transplant abuse in China. By experience, the group above all that took up the challenge and moved in greatest numbers and most cohesively to do something to end that abuse was the medical profession.

In some ways this was understandable, since it was their profession which was being abused. As well, they had forms of influence, through peer pressure, that others did not have. In addition, their knowledge of the science of transplantation and the people involved meant that many of them knew that this abuse could be and was happening.

After the first version of the report Bloody Harvest came out in July 2006, David Kilgour and David Matas travelled around the world to combat the abuse their report identified. Conferences of transplant professionals turned out to be fruitful venues. Co-editor David Matas participated in the Congress of The Transplantation Society in Sydney, Australia in 2008 and in Vancouver in 2010, the American Transplant Congress in Philadelphia in 2011 and Congress of the European Society for Organ Transplantation in Glasgow in 2011. He met many concerned, knowledgeable professionals including several of the contributors to this book.

The unethical organ procurement practices in China led to the foundation of the NGO “Doctors Against Forced Organ Harvesting” (DAFOH). Executive Director of DAFOH and co-editor, Dr. Torsten Trey, made contacts with many doctors from around the world who shared the same wish to end this unethical practice. Introduction 3 This book builds on these contacts and this developing coalition of medical concern. It is a statement of the problem, a report on the efforts made to date and a call for continuing efforts to combat the abuse.

The first essay, by Dr. Torsten Trey, introduces the topic of the book. His presentation shows how transplant medicine in China got to the point where it is now. His essay analyses organ sources and shows that the officially acknowledged source of organs, prisoners sentenced to death, cannot be the only explanation for organ sourcing. The second essay, by Dr. Arthur Caplan, focuses on the ethical complications which arise from using prisoner organs for transplantation with the claim that there is free consent. The author reminds us of the responsibilities of the medical profession and lays out options doctors have.

Dr. Ghazali Ahmad, the author of the third essay, shares his experience about the shifts in transplant tourism in his country, Malaysia, in recent years and how transplant treatments in China for Malaysian patients changed after 2006. The essay is a reminder that following ethical requirements is a pre-condition for best practices in medicine.

Ethan Gutmann, the author of the fourth essay, provides a survey based estimate of Falun Gong murdered for organ transplants. The author relies on a range of detailed interviews of individual witnesses.

The author of the fifth essay, Erping Zhang, addresses the history of transplant medicine and laws in China. He attempts to explain the particular vulnerability of the Falun Gong movement to being targeted for organ harvesting.

In the sixth essay, David Matas looks at the same issue as Ethan Gutmann, the issue of numbers, using a different methodology. Though the techniques are different, the conclusions largely coincide. The seventh essay, by David Kilgour and Jan Harvey, provides perspective on Falun Gong as well as a historical timeline of events surrounding unethical organ harvesting in China. References to 4 State Organs specific individual victims of organ harvesting add further reality to the story of victimization.

The author of the eighth essay, Dr. Jacob Lavee, recounts his personal path after a patient of his in Israel received a heart transplant on short notice in China. He developed ideas later used for a new transplant law in Israel, a law which generated a more than sixty percent increase in organ donations in one year.

In the ninth essay, Dr. Gabriel Danovitch elaborates on the responsibility of scientists to pursue ethical research. The author urges the application of ethical standards when publishing research results in medical journals.

The tenth essay, the work of Arne Schwarz, addresses the use of transplant related drugs tested in clinical trials in China and elaborates on the question of how pharmaceutical companies react to the fact that over ninety percent of transplant organs in China stem from prisoners. The author advocates that data unethically acquired in clinical trials should not be used for scientific findings.

In the eleventh and last essay, Dr. Maria A. Fiatarone Singh writes a personal essay about her involvement in promoting ethics in transplant medicine. Despite her not being professionally part of the transplant field, the author felt compelled to take an active role in calling for an end to unethical organ harvesting in China.

David Kilgour and David Matas began their investigative work in this area because a woman using the pseudonym Annie, then in Washington, D.C., told the Epoch Times a story of how her ex-husband harvested corneas of Falun Gong practitioners in Sujiatun Hospital between 2003 and 2005. Epoch Times published the story in its March 17, 2006, edition. Annie said other doctors at the same hospital harvested other organs of these victims, that Falun Gong were killed during the harvesting and that their bodies were cremated.

Annie’s interview led to a controversy about whether or not she was telling the truth. The Government of China, as one might expect, denied what she said. The Coalition to Investigate the Persecution of the Falun Gong (CIPFG), a Washington, D.C. based NGO, then asked David Kilgour and David Matas to investigate her claims. Sujiatun is a district in the city of Shenyang. Shenyang is a city in the province Liao Ning.

While he was in Liao Ning, Bo developed a reputation as a brutal leader in the persecution of Falun Gong. The period that Annie’s husband worked in Sujiatun Hospital and the period that Bo Xilai was Governor of the province in which the hospital was located overlapped. Bo, in February 2004, went to Beijing where he became Minister of Commerce. While Minister of Commerce, Bo Xilai travelled around the world to promote international trade with China and investment into China. His travelling gave victims the opportunity to serve him with lawsuits for his role in the persecution of Falun Gong in Liao Ning Province. Lawsuits commenced against him in thirteen different countries including Canada, the U.S., and Australia.

Bo’s vulnerability to foreign lawsuits became a reason to move him out of his then position and prevent him from acquiring any new position which required foreign travel. Bo went from Minister of Commerce in Beijing to Mayor of Chongqing in November 2007 and became then a member of the 25 member Communist Party Central Committee.

Wang Lijun was the head of the Jinzhou City Public Security Bureau On Site Psychological Research Center (OSPRC), Liao Ning Province from 2003 to 2008. He conducted research on a lingering injection execution method which would allow organ removal for transplants before the person died from the injection. He conducted further research to prevent patients who received organs of injected prisoners from suffering adverse effects from the injection drugs. 6 State Organs In September 2006, he received the Guanghua Science and Technology Foundation Innovation Special Contribution Award for his research and testing of this lethal injection method. In his acceptance speech, he talked about “thousands” of on-site organ transplant cases from injected prisoners in which he and his staff participated. Wang worked under Bo in Liao Ning Province in 2003 and 2004. In 2008, shortly after Bo was moved from Beijing to Chongqing, Bo brought Wang from Liao Ning Province. Wang held various positions in public security in Chongqing and in 2011 became deputy mayor of the city under Bo.

Wang, to international amazement, in February 2012 attempted to defect to the United States, seeking asylum in the U.S. Consulate in Chengdu. Neither the Americans nor Wang have made public the reason for this attempted defection, though there are many rumours. The Americans decided against giving Wang asylum, and he was handed over to the Chinese authorities. He remains in detention as this introduction is being written.

Bo was expected to become a member of the nine member Communist Party Standing Committee in the fall of 2012. Instead, shortly after Wang’s attempt at defection, Bo was purged from his position in Chongqing and from the Central Committee. Chinese Prime Minister Wen Jiabao, at a closed Communist party meeting in Zhongnanhai shortly after these events, is reported to have addressed organ harvesting and Bo Xilai’s involvement.

A source attributes to Wen these remarks: Without anaesthetic, the live harvesting of human organs and selling them for money – is this something that a human could do? Things like this have happened for many years. We are about to retire, but it is still not resolved. Now that the Wang Lijun incident is known by the entire world, use this to punish Bo Xilai. Resolving the Falun Gong issue should be a natural choice. What happens in China behind closed doors at Communist party meetings is, by its very nature, not a matter of verifiable public record. What could be seen though by anyone at this time was the lifting of censorship on the killing of Falun Gong for their organs. In late March 2012, search results about organ transplants on the officially sanctioned Chinese search engine Baidu showed information about the work David Kilgour and David Matas did, Bloody Harvest and the involvement of Wang Lijun in organ harvesting.

It is hard to let a genie just a little way out of the bottle. Knowledge spreads, even in a society subject to censorship. Selective leaks and references to organ transplant abuse by those involved in the power struggle within China are bound to have an effect beyond the power struggle itself, to have a real impact on the abuse.