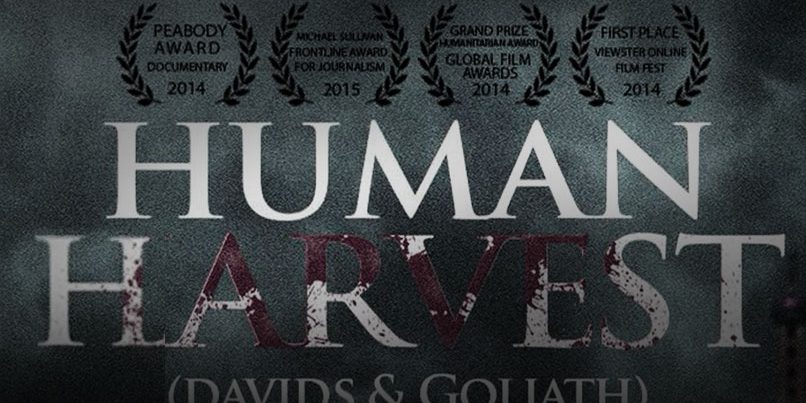 An unflinching documentary about mass murder for profit in modern China has been granted one of the most prestigious awards in television and broadcast, the Peabody Award.

“Human Harvest,” directed by Leon Lee, was produced in 2014 and has been broadcast around the world and during film festivals since then. It was previously awarded the 2015 Michael Sullivan Frontline Award for Journalism in a Documentary.

The film focuses on the harvesting of organs of practitioners of Falun Gong, a Chinese spiritual discipline, by Chinese military and civilian hospitals. Falun Gong, which consists of meditative exercises and moral teachings, has been persecuted in its homeland of China since 1999.

This is a harrowing exposé of a fiendish system of forced organ donor transplants.

The anti-Falun Gong campaign has featured arbitrary detention, forced ideological re-education, widespread torture in custody, and thousands of deaths due to that torture.

The campaign was augmented by a media offensive that slandered adherents as deranged and unworthy of sympathy. Soon after the campaign against it began, researchers said that the Falun Gong population became a prime target for the lucrative organ trade.

“With powerful testimonials about the intricacies of the trade and the human cost, including interviews with Chinese doctors who confide they’ve been coerced into removing organs from live political prisoners, this is a harrowing exposé of a fiendish system of forced organ donor transplants,” wrote the Peabody Award judges, all of whom must endorse award winners.

The night before the official announcement Lee, the director and producer, was working up a modified version of the feature for broadcast with his co-producer, Raymond Zhang.

He received the notice that they had won the Peabody while in bed, in his pyjamas, at about 5:00 a.m. on April 14. “Congratulations, Peabody Award winner,” the subject line announced, he recalled.

“It is my great pleasure to inform you that ‘Human Harvest: China’s Illegal Trade,’ is the recipient of a 2014 Peabody Award,” the note continued. “Congratulations on becoming part of a select group of honorees.”

Lee said, “I had to read it a couple of times to make sure I got it right.”

The first thing he did was tell his wife, who was sleeping with their 3-year-old son (he still has trouble getting to sleep by himself.) “So I woke her up. She thought something bad was happening. She said, ‘Can we talk about it in the morning?’”

The website of the award group states that there were 46 winners from around 1,100 entries in 2013. Applications for the 2014 winners closed in January this year. Peabody quotes Walter Cronkite saying of the award, “You count your Emmys, you cherish your Peabodys.”

Stephen Colbert, the comic, described the Peabody Award thusly: “like an Oscar wrapped in an Emmy inside a Pulitzer.”

“I’m very happy to receive the award. It’s a great encouragement for me and my team, but more importantly shows that organ harvesting itself is being recognized and people are paying more and more attention to the issue,” Lee said in a telephone interview.

Among the judges that endorsed the award are veteran journalists, communications professors and deans, two former editors-in-chief of Time, and a number of public relations executives, according to the Peabody website.

After the award announcement, Lee received an email from Jeffrey P. Jones, the director of the George Foster Peabody Awards at the University of Georgia. “We are very proud of the difficult work you’ve done on such an important issue,” it said. “I hope you can join us in New York City to spread the word further on a story that truly matters.”

The prestigious endorsement for the documentary is part of a growing trend of mainstream acknowledgement of a topic that has for years lingered on the margins of public discourse about China and the human rights abuses there.

“Human Harvest” is a lengthy and detailed exploration of the allegations, evidence, and inference of the mass murder of Falun Gong prisoners of conscience in China, beginning in around 2000. It includes interviews with doctors, researchers, labor camp survivors, and organ recipients, building an overall picture of how the crime likely took place—and even how it may be continuing.

I had to read it a couple of times to make sure I got it right.

It is difficult to know whether the harvesting is ongoing, given the lack of transparency around Chinese military hospitals and the transplant system. Researchers said that around 60,000 Falun Gong practitioners were killed for their organs from 2000 to around 2008. Interviews with labor camp survivors as late as 2013, conducted by journalist Ethan Gutmann, indicate that harvesting activities may have continued at least up till then.

One element of the evidence, which the documentary delves into, is the harvesting of victims before they are dead—termed live organ harvesting, which results in the death of the donor.

This method produces the freshest organ, given that every minute a kidney, liver, or heart is not being flushed with fresh blood, its quality worsens. It means that the organ is removed while the victim’s heart is still beating, and that they die from the subsequent blood loss and trauma. Anaesthetic and muscle relaxants are believed to be used often to sedate and disable the victim.

‘Fork in the Road’

“This award may indicate a new acceptance within the general public and within the elite that forced organ harvesting of prisoners of conscience is real,” said Ethan Gutmann, a journalist whose book, “The Slaughter,” published last year, is an in-depth exploration of the topic.

It also highlights the way in which public and policy-level treatment of the question is “at a fork in the road,” he said.

The Transplantation Society (TTS), a peak international body on international transplant policy, plans to once again embrace China’s transplant system this summer. International ties had been put on hold from early 2014, after Chinese authorities appeared to renege on previous promises.

Now, after renewed high-profile pledges by the country’s top organ transplantation Huang Jiefu, that no more prisoners will be used in organ transplants, TTS is set to publicly endorse China’s transplant system.

TTS and other international medical groups have not taken it upon themselves to declare a public stance on the evidence and questions raised in the “Human Harvest” documentary. Nor do they seem prepared to demand that Chinese authorities stand to account for the tens of thousands of prisoners of conscience that are believed to have been slaughtered for commercial purposes.

In this larger context, “The question is whether a Peabody Award will create enough of a groundswell so that The Transplantation Society will reconsider their decision,” said Gutmann. “I don’t know.”