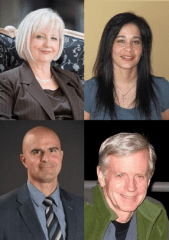 Heard of human trafficking? Not sure how it happens? Didn’t know Canadian boys and girls are being bought and sold for sex? Did you think the slave trade was eradicated 200 years ago? Think again. Human trafficking, the modern day slave trade, is alive and well in Canada. And it hurts us all. Human trafficking is the fastest growing and most lucrative criminal enterprise in Canada. In fact, a trafficker earns an average of $280,000 per year per victim in Canada. In January, Ottawa saw the first teen pimp case in Canadian history. In February, law enforcement from Alberta to Nova Scotia, launched Operation Northern Spotlight targeting pimps and johns, which also rescued under-age victims, some as young as 15 years old.

Director
Council for a Community of Democracies

David Kilgour is currently a Fellow of the Queen’s University Centre for the Study of Democracy and a director of the Council for a Community of Democracies (CCD). He was one of the two longest-serving MPs in the House of Commons for the 38th Parliament. First elected in 1979 in the riding of Edmonton Strathcona, he has been re-elected seven times, most recently in 2004 to represent the constituents of Edmonton – Mill Woods – Beaumont.

First elected to the House of Commons in 1979, he was re-elected seven times, most recently in 2004, for the south-east region of Edmonton. During his time in Parliament, he was Deputy Speaker and Chair of the Committees of the Whole House, Secretary of State for Latin America & Africa (1997-2002) and Secretary of State for Asia-Pacific (2002-2003). He did not stand in the 2006 election.

David remains active on issues of human dignity. A 2007 book, Uneasy Neighbours, co-authored with David Jones, a former American diplomat, discusses the relationship of Canada and the USA. In 2009, he published with David Matas Bloody Harvest-The Killing of Falun Gong for their Organs. He and Matas were awarded the 2009 Human Rights Prize of the International Society for Human Rights in Switzerland for their work in raising awareness of state-sponsored organ pillaging in China. For further information, see: www.david-kilgour.com.

Philosophy – Casandra Diamond
Casandra Diamond is a Human Trafficking Case Manager for the Women’s Support Network of York Region. A survivor of the sex trade, Casandra has an in depth knowledge of the needs of women who are able to flee the industry or are rescued, given that she is familiar with the grooming and recruiting tactics and the clandestine aspects of organized crime and gang dynamics. She works with other community members who are also interested in designing programs that realistically meet the needs of trafficked and exploited women.

Apart from her professional duties, she voluntarily supports a group of women and their families in planning and moving towards a brighter future. Her dream is to be a catalyst for setting up a holistic service to provide a bridge towards successful reintegration into society for survivors of the industry. She is extremely knowledgeable about hyper-sexualisation of children and pornography within social media and its impact on youth culture and ultimately on youth themselves. She clearly draws the line between current youth culture and the readying of today`s youth to participate in the “game” either as consumers or exploited persons.

Detective Seargent Dominic Monchamp has been serving the SPVM for 20 years and specializing in the domain of human trafficking and sexual exploitation for the last 15 years. His vast investigation experience includes overseeing and coordinating undercover operations, including electronic surveillance and fieldwork. He has specialized in units related to this field as an Investigations Supervisor since 2005. He is involved in excess of 1800 files regarding human trafficking and had logged over 600 interviews with victims. He was declared an expert witness by the court in 2006 and 2013.

He conducts lectures and conferences in this domain at regional, provincial and national levels. He is an active member in several committees including CATHII (Action Committee against Human Trafficking – Domestic and International) (2005) (2011-2014), BIDE (International office for children’s rights) (2006, 2012-2013), and Temple commitee againts human Trafficking (2008-2014).

Member of Parliament for Kildonan-St. Paul
Founder and President of the Joy Smith Foundation