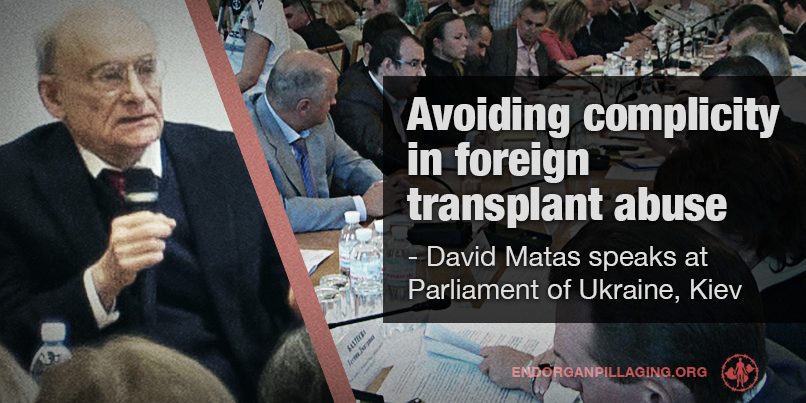 Speach given at roundtable at the Parliament of Ukraine, Kiev

Thank you for inviting me to address you.  I had come from Winnipeg in Canada on Tuesday to Vienna to address on Friday the International Academy of Law and Mental Health.  The organizers kindly took advantage of the fact that I was relatively nearby to invite me here.

I am pleased to see that the Parliament of Ukraine is addressing its law on transplants and considering reform.  In enacting this reform, I have one element which I encourage you to place in your law, the avoidance of any complicity in foreign transplant abuse.  Regrettably, my research and the research of others have led us to conclude that this abuse exists.  Every country must lay in its defences to prevent becoming part of this abuse.

David Kilgour, a former Canadian cabinet minister, and I concluded that practitioners of Falun Gong since 2001 had been killed for their organs throughout China in the tens of thousands.  The first version of our report was July 2006; the second version was January 2007; the third version, in book form, was November 2009, under the title Bloody Harvest: The Killing of Falun Gong for their Organs.

Falun Gong is a set of exercises with a spiritual foundation, roughly a Chinese equivalent to yoga, which started in 1992 with the teachings of Li Hongzhi. The Communist Party of China initially encouraged the practice of the exercises because the practice is beneficial to health, but its increasing popularity and spiritual foundation eventually led the Party to fear for the ideological supremacy of Communism.  The Party decided in 1999 to repress the practice without officially banning it.

Practitioners of the exercises were arrested in the hundreds of thousands and asked to recant. If they did not, they were tortured.  If they did not recant after torture, they were put into indefinite detention in re-education through labour camps.

As a result of our work, the American based doctor Torsten Trey founded the NGO, Doctors against Forced Organ Harvesting (DAFOH).  I, with Torsten Trey co-edited a book of essays on the subject, published August 2012 under the title State Organs: Transplant abuse in China.  The authors, from around the world, were mostly members of this new organization DAFOH.

Ethan Gutmann, an American journalist based in England in August 2014 published a third book on the subject, under the title The Slaughter. He concluded that the killing of prisoners of conscience for their organs in China extended beyond Falun Gong to Tibetans, Uighurs and Eastern Lightning House Christians, albeit in much smaller numbers.

In light of the fact that there are now three books and nine years of research on this issue, it would be impossible in the short time I have now to do justice to the evidence that has led me and other researchers to come to the conclusion we have.  Briefly I draw to your attention five bits of information:

• The volume of transplants in China is huge, 10,000 or more a year, the largest in the world after the United States.

• Waiting times in China for transplants are short.  Transplants can be booked weeks in advance for liver, lung or heart transplants, which means someone is being killed for their organs.

• The Government of China claims that organs have come from prisoners sentenced to death, but will not give out death penalty figures.  Because of a variety of factors, the number of people sentenced to death and then executed to meet transplant volumes would have to be in the order of 100,000 a year, an impossible figure.

• Prisoners of conscience in detention in China are blood tested and organ examined.  Other prisoners are not.  The examinations are not done for their health, because they are tortured in detention to recant their beliefs.  It is necessary for transplants because of the need for blood type compatibility and ideally also tissue type compatibility.

• Investigators called hospitals in China pretending to be relatives of patients who needed transplants and asking if the hospitals had organs of practitioners of Falun Gong for sale, on the basis that the practitioners and their organs would be healthy.  Across China, about 15% of the hospitals called said they did have these organs for sale.

Legislation prohibiting sourcing organs without consent should have extra-territorial effect.  That is to say, a person who is complicit in transplant abuse abroad and who is present in Ukraine should be prosecutable for that complicity.  The legislation at the least should apply to Ukrainian nationals.  Beyond that it should apply to Ukrainian permanent residents.  Ideally it should extend even to those who are in Ukraine only temporarily.

Legislation should prohibit transplant tourism.  It should be directed against brokerage and advertising, against all those who attempt to make money out of the purchase and sale of organs abroad.

For those travelling abroad for transplants, the onus should be placed on the travellers to establish beyond a reasonable doubt that the sourcing of organs is proper.  The law should penalize wilful blindness as part of knowing complicity.

The law needs immigration controls to prevent foreign transplant professionals who abuse their profession from entering Ukraine.  There should be a bar on entry for such people.

The legislation should impose ethical standards on the local health institutions so that these institutions do not become complicit in abuse.  The legislation should prohibit training, joint research, or collaboration of any sort with foreign professionals who have engaged, are engaging or there are reasonable grounds to believe will engage in organ transplant abuse.

My conclusion is this.  While it does not fall within the powers of Ukraine to prevent foreign transplant abuse in general or the killing of prisoners of conscience in China for their organs in particular, Ukraine must do what it can not to have any part in this abuse.  The measures proposed here would serve three purposes – showing the victims that Ukraine is concerned about their plight, telling the perpetrators that Ukraine will not countenance any complicity in their crimes, and demonstrating to the public that Ukraine is doing what it can to combat this abuse.