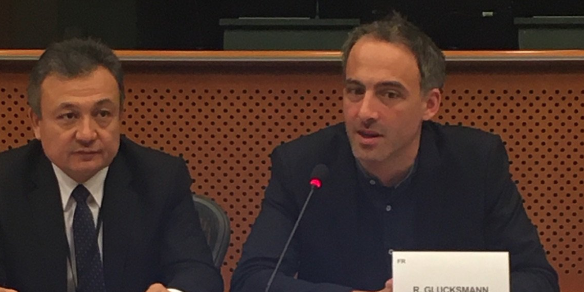 Representatives from ETAC spoke at the World Uyghur Congress conference at the European Parliament 7-10 Dec 2019 on the international effort to combat organ harvesting. Topics included the work of ETAC, a framework and roadmap for Uyghurs to take action on organ harvesting, and how to engage within legal frameworks and international forums.

The following is from: https://www.uyghurcongress.org/en/the-world-uyghur-congress-concludes-a-successful-conference-and-media-training-workshop-in-brussels/

From 7 – 10 December, the World Uyghur Congress (WUC), in cooperation with the Unrepresented Nations and Peoples Organisation (UNPO), held a successful media training workshop for Uyghur activists and a day-long conference entitled ‘The Uyghur Crisis: China’s Laboratory for Rights Abuses’ in Brussels, Belgium.

Uyghur activists from around the world travelled to Brussels to participate in the three-day media training from December 7-9 to learn how to effectively and responsibly engage with the media while addressing the Uyghur crisis. The workshop provided young Uyghur activists with the skills, knowledge and context to facilitate them in engaging with different forms of media in an effective, responsible and appropriate way.

Prominent journalists, human rights activists, experts on disinformation and propaganda and Uyghur media experts gave presentations at the training to give participants multiple perspectives and insights about how to successfully engage with the media. The workshop focused on the different opportunities and challenges activists are presented with in different forms of media engagement, especially regarding social media and interactions with journalists and other media outlets.

As the crisis in East Turkistan continues to garner significant media attention and the efforts of the Chinese government to spread disinformation about the crisis increases, there is a need for Uyghur activists to have the capacity and ability to engage with the media in a meaningful way. This successful training acknowledges this new reality and helped to improve the capacity of Uyghur activists around the world.

It was the aim of this event to bring together health and medical experts with human rights groups, researchers, policy-makers, and Uyghur leaders to discuss the issue of the region of East Turkistan (and the Uyghur people) used as a laboratory for Chinese policy and technological development.

The opening session of the conference began with a statement from MEP Raphaël Glucksmann, who talked about the need for international solidarity with the uyghur community. Glucksman stressed that it is a matter of adhering to our values and principals to defend the basic human rights of the Uyghur people. He called for the EU and the international community to take further action to end the crisis as human rights are universal rights that apply to all people. He concluded by noting that the Uyghur crisis had significant implications for the entire international community, saying, “By defending the Uyghurs today or Tibetan or the Hongkong demonstrators we are defending ourselves tomorrow.”

The next speaker was the President of the World Uyghur Congress, Dolkun Isa. Mr. Isa spoke about the massive human rights abuse in East Turkistan committed by the Chinese government. Mr Isa lamented the relative inaction of the international community, saying, “Despite of increasing awareness of the recent crisis, 1.8 to 3 million Uyghur remained arbitrarily detained in camps in one of the largest mass arbitrary detentions in modern history”. In regard to evidence of internment camps provided by the China Cables, Mr Isa said there was no longer any excuse for inaction, stating: “The time for silence on our suffering is over”.

Lucia Parucci from UNPO then talked about how the awareness of the European Parliament regarding the situation in East Turkistan has improved in recent years, due to the good work of activists and NGOs. She especially mentioned the Sakharov Prize which honoured the peaceful activism of Ilham Tothti in the European Parliament this year. “We really need to use the momentum” she said “ to make sure that all the countries which are part of the EU will understand how serious the situation is.”

Further remarks were made by a number of panelists who shared their experiences and expertise on the topic. Former surgeon and a prominent activist against organ harvesting, Mr. Enver Tohti, summarized the history and current status of the use organ harvesting in East TurkistanAlbanian journalist Osli Jazexhi talked about his personal experience seeing the internment camps on a propaganda tour for journalists organized by the chinese government. He informed attendees of the conference that he observed an intentional strategy to eradicate Islam and the Uyghur ethnic identity in the camps and that they were not vocational training centres as the Chiense government claims.

The China Director for Human Rights Watch, Sophie Richardson, then presented the findings HRW’s research on the use testing of repressive security and surveillance technology by Chinese companies on the Uyghur people, and especially on the use of the Integrated Joint Operations Platforms framework. Democracy and anti-kleptocracy activist Andrea Ngombet also made a statement of support, advocating for human rights for Uyghurs and stating that we must hold our own government accountable for their lack on action on the issue.

The opening session of the conference concluded with a general discussion among the participants about what the EU and the international community can and must do to end the crisis in East Turkistan. Several people emphasized the responsibility we all have as individuals to take more concrete action to stop this crime against humanity.

The remaining three panels of the conference were held at the ULB campus in Brussels and were focused on the use of organ harvesting and repressive security and surveillance technologies, as well as their implications for the EU and other states. Panelists were encouraged to give concrete, action-orientated recommendations on what was needed to effectively address and counter these serious human rights violations.

After the evidence for the use of organ harvesting by the Chinese government was laid out and discussed, the third panel of the conference built on this discussion to focus on the international effort to combat organ harvesting. Ms. Susie Hughes, the director of the International Coalition to End Organ Harvesting, spoke first and informed the participants about the work of the coalition and provided a framework and a roadmap to take further action on the issue. Mr. David Matas, a prominent human rights lawyer, gave a list of 21 points where activists might engage on the topic within legal frameworks and in international fora. Dr. Sung-How Sue, the Chief of the Department of Cardiovascular Surgery at the Pojen General Hospital in Taipei gave a presentation on the use of ‘ECMO’, which is used to preserve human organs for longer periods of time and called on the Taiwan government to meaningfully address the issue of organ harvesting. Finally, Dr. Yoshihide Ogawa, the Emeritus Professor of the Faculty of Medicine at the University of the Ryukyus in Japan, discussed the possibility of international cooperation and sanctions to address organ harvesting with attendees.

The final panel opened up a discussion on China’s testing and use of repressive security and surveillance technology against the Uyghur people and its broader implications for human rights and international security. Ms. Hannah Burdorf, an academic and researcher at Newcastle University, gave an insightful presentation on the evolution and current trends in security and surveillance in East Turkistan, based on her experiences on her recent trips there. She was followed by Bota Jardemalie, a Kazakh lawyer and human rights activist, who detailed the spread of CCP security and surveillance technology in Kazakhstan and its implication for Kazakh activists and civil society. This notion that the repressive security and surveillance technology tested on Uyghurs was spreading was further reinforced by the presentation of Ray Wong, a prominent democracy activist from Hong Kong, who discussed this technology was now being used to suppress Hong Kong democracy protests. Omer Kanat, the Executive Chairman of the WUC and Director of the Uyghur Human Rights Project, was the last speaker of the conference. He called for governments to ensure that companies in their countries were not providing technological support, materials or investment to Chinese companies complicit in these crimes against humanity and called for further action.

The WUC sincerely thanks the participants of our media training, the speakers and panelists at our conference and all those who showed up to attend for their time, energy and insights, which helped to make these initiatives a success. While the internment camps are the most visible feature of China’s repression of Uyghurs, the Chinese government’s repressive policies reach every element of Uyghur society and has turned East Turkistan into a ‘rights free zone’. What is happening in the region, especially in the case of repressive security and surveillance technology and the use of organ harvesting, will have, and already is having, major impacts on the security and well-being of our international community.