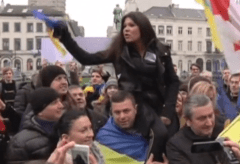 Ruslana Lyzychko, Ukrainian protest leader, encouraged Chinese people to rise up against the pathologies of the communist regime, like illegal organ harvesting from Falun Gong practitioners who are killed for profit.

Ruslana Lyzychko, the most successful Ukrainian singer and winner of the Eurovision Song Contest for Ukraine in 2004, received the International Women of Courage Award in Washington, DC on Thursday. Ruslana took part in the popular uprising in Kiev, the capital of Ukraine, and spent months alongside demonstrators calling for change.

[Ruslana Lyzychko, Ukrainian Musician]:
“You know that justice is on your side and this gives you strength. If you are a positive person, you pray to God and you have strong moral principles, you have nothing to be afraid of.”

Protests in Ukraine broke out after the now deposed president Victor Yanukovych’s government rejected a major accord with the European Union in favour of stronger ties with Russia last November. The demonstrations intensified in the wake of waves of police attacks on student protesters, severe new anti-protest laws, and the kidapping and beating of opposition activists.

Other Yanukovych maneuvers, like his public praise for the communist regime in Chia, also did not go over well with the public.

[Ruslana Lyzychko, Ukrainian Musician]:
“It’s very interesting that Mr. Yanukovich and his Party of Regions had recently had some consultations with the Chinese Communist Party and they declared that they would learn from the experience of Chinese communists. In Ukraine nobody believed he was serious about it, because Ukrainians don’t need communism.”

Ruslana is not affiliated with any political party. And like the majority of the protesters, she wants the freedom of self-determination for the Ukrainian people. This, in her view, must start with liberation from the corrupt structures of power that are a legacy carryover from the era of communist rule.
And she encouraged Chinese people to rise up against the pathologies of the communist regime, like illegal organ harvesting from Falun Gong practitioners who are killed for profit.

[Ruslana Lyzychko, Ukrainian Musician]:
“I think that there are many awful things done for business now. People are stepping over moral norms to do business. And people get killed when we try to fight against this alone, when we are separated from each other. If Chinese people want to fight against this problem, there are many people in Ukraine that will want to help you.”

Ruslana says that Ukraine’s lesson for the world’s oppressed is that when people unite, spectacular change is possible.

[Ruslana Lyzychko, Ukrainian Musician]:
“I think that with the Ukrainian example, everyone will be ready to show solidarity across the world. It will show people that when we are many we are a great power against any corrupted government. So Chinese people do not be afraid and start your protest.”