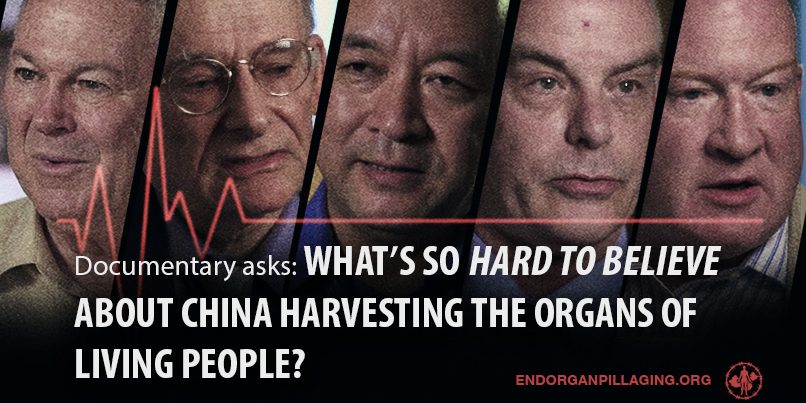 It is difficult to secure a human heart for transplantation. The donor is usually brain dead and on life support, and the donor and recipient must share matching blood and tissue types to prevent rejection.

So Jacob Lavee, a heart transplant surgeon at Sheba Medical Center, Tel Aviv University,  found it hard to believe when a patient in his hospital department in Israel said that he was due in China in a fortnight, on a specific date, for a heart transplant.

“I looked at him and I said: ‘Do you listen to yourself? How can they schedule a heart transplant ahead of time two weeks?’” Dr. Lavee responded.

That was in 2005. Dr. Lavee recounts the episode in the documentary “Hard to Believe,” the first sustained examination of why the Chinese communist regime’s practice of harvesting the organs of prisoners of conscience—what researchers call a mass murder of at least tens of thousands of victims—is not more widely known.

The documentary, which features interviews with medical professionals, practitioners of the persecuted Chinese spiritual discipline Falun Gong, a United States congressman, and others, is now broadcasting on PBS stations across the country.

The film was released on DVD on Sept. 29, and will be made available digitally in the United States for one week only.

For some time Dr. Lavee was aware that Israelis frequented China for kidney transplants—but he always presumed that poor Chinese villagers were the donors. This is itself a highly problematic ethical scenario—but humans can live with one kidney.

Heart donations are an entirely different matter. China was known for using organs from executed criminals, but Dr. Lavee noted that the transplant and execution numbers didn’t tally up.

After doing some research into the source of organ donors in China, he stumbled upon a report written by a Canadian human rights lawyer and a former politician, who investigated allegations of organ harvesting from prisoners of conscience in China—specifically, practitioners of Falun Gong, a spiritual discipline which has been persecuted in its homeland since 1999.

“The new information makes absolute sense,” Dr. Lavee says in the documentary, having become one of the key players in the narrative through his own efforts to limit Israel’s involvement in the activity.

The documentary explores how and why researchers believe it’s clear that mass harvesting of Falun Gong prisoners takes place in China, and seeks to understand why more attention isn’t being paid to the matter—why it’s so “hard to believe,” in the words of Louisa Greve, a vice president of the National Endowment for Democracy, who appears briefly in the film.

One answer can be found simply in the nature of the alleged crime: that the government of China catalogs and extracts organs from its own citizens in a systematic and brutally efficient manner for sale to wealthy Chinese and transplant tourists.

The victims of this organ harvesting trade include Uyghurs, and maybe even Tibetans, though most extensive harvesting was carried out against Falun Gong.

At once, over 70 million Chinese citizens became targets for brutal torture and grinding forced labor. Nearly 3,900 Falun Gong practitioners have been tortured and beaten to death, and hundreds of thousands more remain in forced detention, according to Falun Gong statistics and human rights researchers.

Allegations that the Chinese regime was profiting from organs harvested from live Falun Gong practitioners surfaced in March 2006 after the wife of a transplant surgeon involved in harvesting, and a Chinese journalist, went public with details of the macabre affair.

Canadians David Matas and David Kilgour looked into the allegations and tried to disprove them. After considering 33 types of possible proof or disproof, including numerous anonymous calls into China, cross-checking of official transplant numbers, and adopting a simple logical rubric, they concluded in the first ever report on organ harvesting in China that the allegations are true. The Kilgour-Matas report estimated over 40,000 Falun Gong practitioners were killed for their organs.

Author Ethan Gutmann witnessed first-hand the suppression of Falun Gong in Beijing in 1999, and started his own investigation into organ harvesting in 2006. In his 2014 book, “The Slaughter,” Gutmann traced the history of the Chinese regime’s organ harvesting practice from the crude 1990s experiments in the Chinese frontier province of Xinjiang, to the organ profiling of live Falun Gong practitioners under the guise of “health checks” in present-day China. Gutmann estimates that about 65,000 Falun Gong were harvested from 2000 to 2008.

This year, the film “Human Harvest” won a prestigious Peabody awardfor its exploration of the issue, providing perhaps the most prominent acknowledgment of the organ crimes in China to date.

The producers of “Hard to Believe” wanted to present a murder mystery-style narrative that invites watchers to ask why a human rights lawyer, or an Israeli doctor, have come to such jarring conclusions about a mass murder for commercial gain, led by the Chinese state, over the last decade.

Gutmann was initially skeptical about whether that route would be the most impactful, but was ultimately persuaded. Director Ken Stone and co-producer Irene Silber were “sincere in asking the question I couldn’t answer during the writing process,” Gutmann told Epoch Times in a telephone interview.

“‘Hard to Believe’ is the first film that spends more time on the investigators themselves, showing that they are essentially reasonable, objective individuals, with no hidden agenda,” Gutmann said. “It’s a thinking man’s film on organ harvesting.”

The trick was to “keep it simple,” Stone told Epoch Times in a telephone interview. “Focus on the people tied to the issue.”

“If you tell small stories, interesting stories about the people, it eliminates the issue” of the film coming across as a work of advocacy, added Stone, an Emmy Award-winning director and a former television reporter now based in Minnesota.

Of all the stories featured, Stone found the interview with former transplant surgeon Enver Tohti the most compelling. Tohti, a native Uyghur from the west China province of Xinjiang who now drives a bus in London, confessed in recent years to have carried out live organ harvesting in the summer of 1995 on the orders of his immediate superior.

The stories of Ethan Gutmann, Falun Gong practitioners, and Enver Tohti are easily relatable to an American television viewing audience because they are familiar archetypes—the hard-charging, truth-seeking, skeptical journalist, the human rights lawyer, the victims of a brutal persecution, and “Doctor Zero,” the first surgeon they could find who engaged in the practice, Ken Stone explained in a video interview of the producers.