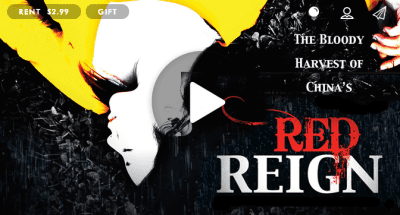 Red Reign examines the shocking evidence of forced organ harvesting of China’s prisoners of conscience, the practitioners of Falun Gong.

Falun Gong, a spiritual practice rooted in Buddhism and introduced to the public in 1991, was banned by the Chinese Communist Party (CCP) in 1999. Hundreds of thousands of practitioners were arrested, imprisoned and brutally tortured if they did not recant their beliefs of ‘truthfulness, compassion and forbearance.’ In 2006, a report by human rights lawyer David Matas, as well as David Kilgour, a former member of the Canadian Parliament, alleged that Falun Gong prisoners were being killed in order to harvest their organs for the lucrative government-run transplant business.

Filmmaker Masha Savitz zeroes in on the efforts of the Nobel Prize nominee David Matas, who wrote the book ‘Bloody Harvest: The Killing of Falun Gong.’ Featuring interviews with Matas, David Kilgour, victims of the Falun Gong persecution and several doctors who share chilling transplant testimonies, as well as a filmmaker whose film on the topic was effectively quashed by the CCP in Canada, Europe, and the US, Red Reign makes a stunning case. An international story of tangled politics and economics intentionally suppressed by the Chinese, Red Reign shows how a large scale persecution of a minority people can still happen in our modern day society.

Purchase your copy of the DVD
Also available, DVD with Educational Use License
Stream or Download Red Reign: The Bloody Harvest of China’s Prisoners through Amazon Instant and Hulu.com