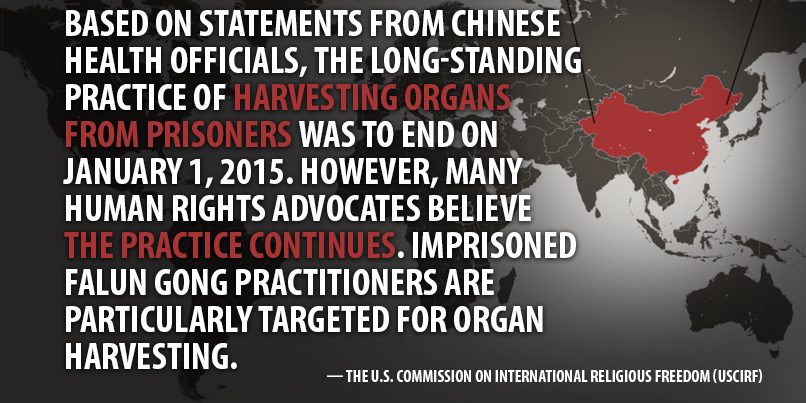 The U.S. Commission on International Religious Freedom (USCIRF) just released their 2016 report. In its China chapter, it states that, “Based on statements from Chinese health officials, the long-standing practice of harvesting organs from prisoners was to end on January 1, 2015. However, many human rights advocates believe the practice continues. Imprisoned Falun Gong practitioners are particularly targeted for organ harvesting.”

In 2011 DOS released their human rights report on China stating that, ”Overseas and domestic media and advocacy groups continued to report instances of organ harvesting, particularly from Falun Gong practitioners and Uighurs.”

European Parliament passed a resolution condemning China’s organ harvesting from prisoners of conscience, including from large number of Falun Gong practitioners, as well as from members of other religious and ethnic minority groups in Dec. 2013.

A similar resolution H.Res.343 was marked up by House Foreign Affairs committee unanimously on March 16, now with 174 bi-partisan cosponsors, waiting to be voted on House floor.