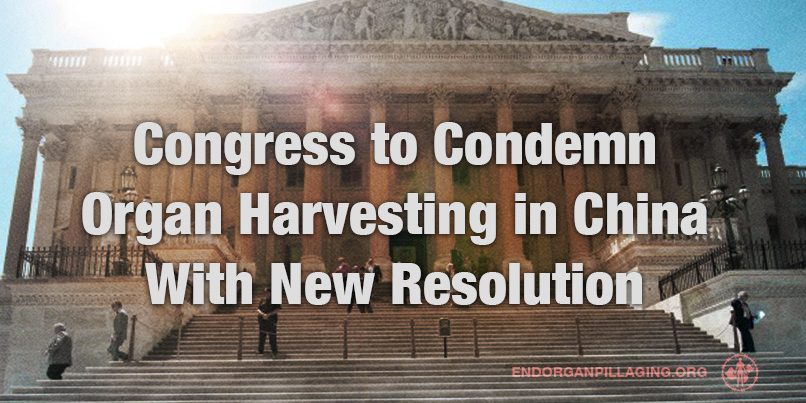 Congress has introduced a resolution that would condemn the Chinese Communist Party for harvesting the organs of prisoners of conscience. If it passes a vote, H.Res.343 would be the first time that the U.S. Congress has publicly addressed this particular abuse in China, which researchers have characterized as one of the country’s most severe human rights violations.

The resolution was submitted by the office of Congresswoman Ileana Ros-Lehtinen (R-Fla.) and Rep. Gerry Connolly (D-Va.), and is based on the language of a similar resolution from the previous Congress.

The full title is “Expressing concern regarding persistent and credible reports of systematic, state-sanctioned organ harvesting from non-consenting prisoners of conscience in the People’s Republic of China, including from large numbers of Falun Gong practitioners and members of other religious and ethnic minority groups.”

It would have the House of Representatives condemn state-sanctioned organ harvesting in China, call for a cessation of the practice, demand an end to the persecution of Falun Gong—the group most heavily targeted by organ harvesting—and call for an investigation into organ transplant abuses.

Falun Gong is a Chinese spiritual practice that was practiced by around 70 million Chinese, according to official figures, before the regime launched a nationwide persecution against it in 1999. The Party leader at the time, Jiang Zemin, saw the peaceful practice as an ideological challenge, and the campaign against it as a way to boost his power in the Communist Party.

The State Department would also be called upon to conduct detailed analysis of the reports of organ harvesting from prisoners of conscience.

H.Res.343 is a “simple resolution,” as it is known, meaning that it requires only the vote of a single house (in this case, the House of Representatives), and allows the House to express its opinion on a matter of public policy, but does not compel the administration or private bodies to act on the resolution’s conclusions.

A strong expression of condemnation from Congress on organ harvesting would be significant, according to Zhang Erping, a spokesperson for the Falun Dafa Information Center. “This is the worst form of crime against humanity—to take human organs while the victims are alive. It would be wrong if people looked aside in the face of such injustice,” Zhang said.

He continued, “It’s great that members of Congress are sponsoring this resolution to make an effort to stop crimes against humanity.” Co-sponsors of the resolution include Reps. Connolly, Rohrabacher, Poe, Diaz-Balart, Brownley, Farr, and Valadao. The previous incarnation of the resolution, which was marked up in committee meeting but not put to a vote, apparently due to time constraints, gained 245 co-sponsors, so it is likely that this version of it will also find wide support.

Since then, new developments have pushed organ harvesting from prisoners of conscience further into the public eye, most notably the receipt of a Peabody Award by filmmaker Leon Lee, whose documentary “Human Harvest” deals at length with the harvesting of Falun Gong adherents’ organs. Peabody Awards are often called the Pulitzers of broadcast and television, and require the unanimous decision of the judging panel.

In praising Lee’s film, they wrote: “Like a mystery novel with a devastating denouement, Leon Lee’s documentary starts with numbers that don’t add up and divines an unthinkable explanation…. Lee found sources inside China who say that the answer is that the harvesting of organs is the execution and that the victims are mostly prisoners of conscience, practitioners of Falun Gong, a persecuted spiritual movement whose goals include better health.”

But even as the public becomes increasingly aware of the evidence of Chinese state-sponsored organ harvesting from prisoners of conscience, a parallel development is underway in China to quickly reform the organ transplant system—or, at least, give the appearance of doing so—and to get back into the good graces of the international medical establishment, which has largely snubbed China since early 2014.

A hearty condemnation, and increased attention by Congress, would prove a setback for these efforts to paint a rosy picture of China’s transplant system and to hope the Falun Gong problem will disappear.

In a statement urging fellow representatives to pass the resolution, Rep. Ros-Lehtinen said: “The Chinese regime’s gruesome practice of organ harvesting from Falun Gong practitioners and other prisoners of conscience is a barbarous violation of human rights and must be stopped… China should immediately end its systematic campaign of propaganda, imprisonment, and abuse against those who practice Falun Gong, release all prisoners of conscience, and allow an independent investigation into its state-sanctioned organ harvesting.”

“I urge all my colleagues in the House to join Gerry and myself in cosponsoring and passing this resolution to help draw attention to the horrific human rights abuses, treatment, and persecution of Falun Gong practitioners,” she said, referring to co-sponsor Rep. Gerry Connolly.

Rep. Connolly also released a statement condemning the persecution of Falun Gong, saying that “this resolution advocates on behalf of their basic human rights and freedom and I hope my colleagues will continue to support strong advocacy on behalf of Falun Gong practitioners.”

Teng Biao, a well-known Chinese rights lawyer currently on a fellowship at Harvard University, said in an interview: “The overall human rights situation in China is terrible—so many people are faced with having their basic rights violated. But Falun Gong is basically the most persecuted group.”

Teng continued: “From what I understand, there’s simply no question about the Communist Party’s illegal organ harvesting of Falun Gong. A huge amount of evidence all points to this. But the Communist Party is constantly covering up the truth, and refuses international investigations—so this makes clear that there’s a problem there.”