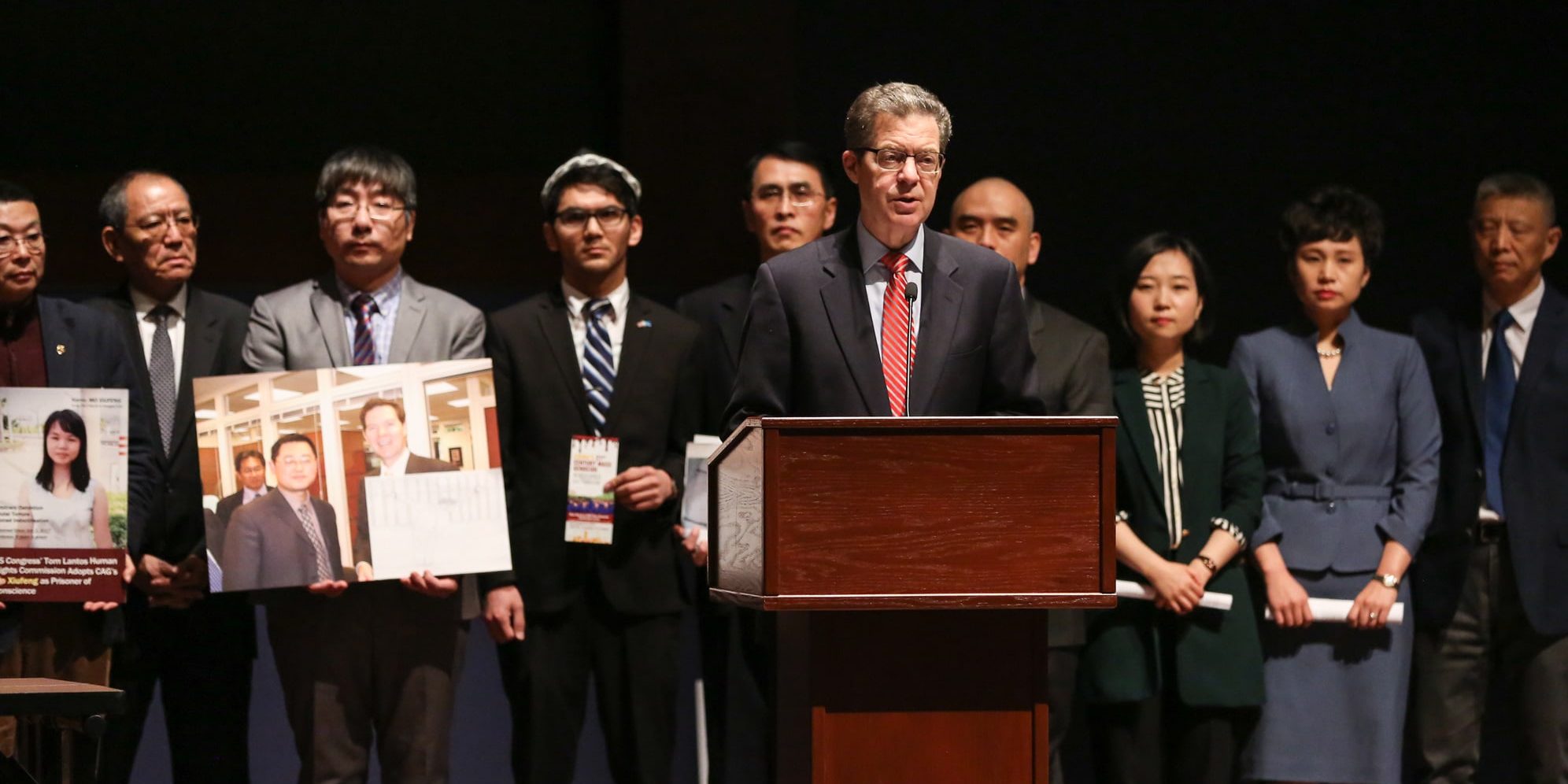 This article was originally published by Jennifer Zeng for The Epoch Times and has been reposted here with permission.

WASHINGTON—For the first time, persecuted faith groups in China and human rights organizations are forming a coalition to advance religious freedom in China, with the backing of the Trump administration and members of Congress.

Sam Brownback, the U.S. ambassador at large for International Religious Freedom, and Rep. James P. McGovern (D-Mass.), the newly appointed chairman of the Congressional-Executive Commission on China (CECC) and co-chairman of the bipartisan Tom Lantos Human Rights Commission, joined representatives from persecuted faith groups in China, in vowing to advocate for and defend religious freedom in China at a press conference to announce the formation of the Coalition to Advance Religious Freedom in China (CARFC) in Washington.

“I am here to add the administration’s support,” Brownback said on March 4. “We are deeply concerned by the Chinese government’s tightening restrictions on religious practice, including for Protestants, Catholics, Tibetan Buddhists, Muslims, the Falun Gong, and others.”

Brownback pointed out that in recent years, new regulations were implemented to penalize all unregistered religious activities, including actions by foreigners.

“We are here today to give you a chance to hear from the groups that are affected by these actions, and to officially recognize the launch of the Coalition to Advance Religious Freedom in China by the International Religious Freedom Roundtable,” he said.

“We believe religious freedom is a universal human right. … It is a fundamental right. Our country was founded on it. It is in the Chinese Constitution. It is in the U.N. Charter, the Declaration of Human Rights. We believe that every person around the world should be free to believe or not to believe, as they see fit.”

McGovern said he was happy to see that so many organizations have decided to come together—transcending cultural, ethnic, and doctrinal differences—to work hard toward religious freedom of China. He said he came to show support “to reiterate my commitment to do all I can as a member of Congress to help bring the persecution to an end.”

“Last week, the speaker of the House of Representatives, Nancy Pelosi, re-appointed me as the co-chair of the Tom Lantos Human Rights Commission, and newly appointed me as chairman of the CECC. So, I have some tools on hand, and I plan to use them to the best of my ability,” he said.

McGovern said he would do everything he could to not only raise the visibility of human rights violations in China, but also help Americans understand why what happens in China matters.

Noting that 2019 is the 20th anniversary of the persecution of Falun Gong in China, he told reporters: “The issue of Falun Gong is something we care very deeply about. We are going to explore options in the month ahead.”

Former Rep. Frank Wolf (R-Va.) made a passionate speech, calling for special attention to be paid to the more than 100 Confucius Institutes at U.S. universities, as well as to Western companies that sell products to China that fuel human-rights abuses.

He said every college that has a Confucius Institute should invite Catholic priests, Protestant pastors, Uyghurs, Tibetans, and Falun Gong practitioners to speak, and that if the institute does not allow that, it should be removed from campus.

Greg Mitchell, chair of the International Religious Freedom Roundtable, said that Wolf, Brownback, and others had been recommending for some time that all the persecuted groups be united and become “one unit, one team and speak with one voice … and we are finally doing it now.”

“By forming a Coalition to Advance Religious Freedom in China, persecuted faith communities again unite their voices in support of religious freedom for all in China,” he said.

Mitchell said that while the coalition is still in its initial stage, he anticipates that more groups will join, and they will organize more activities to “try to put pressure on the U.S. government to take further concrete actions, to put sanctions on China.”

Mitchell says he thinks the coalition will have a strong impact as a united force.

One of the coalition members, Louisa Greve, director of External Affairs of the Uyghur Human Rights Project, suggested “urging the use of the Global Magnitsky Act to hold Chinese government officials responsible for the well-documented campaign of oppression targeting Uyghurs and other ethno-religious communities in the Uyghur Region,” and passing the Uyghur Human Rights Policy Act and the Uyghur Intervention and Global Humanitarian Unified Response Act.

Dr. Han Lianchao, vice president of Citizen Power Initiatives for China, called for a tougher stance against Huawei and China Electronics Technology Group, which helped the Chinese Communist Party (CCP) establish a surveillance system throughout the country that was worse than what was described in George Orwell’s “Nineteen Eighty-Four.”

Li Kunrui, a former police officer in Dalian City in China, said that the police had an arrest quota when the CCP decided to crack down on religious groups. Sometimes when the police couldn’t arrest enough people, they had to seek help from other police stations that had arrested more than their quota.

Li said police often used hotel rooms to detain and torture people, as they didn’t have to abide by legal procedures there, such as recording the interrogation process, as required by law.

Kuzzat Altay, founder and president of the Uyghur Entrepreneurs Network, said that he lost contact with his 67-year-old father in Xinjiang in February 2018. The last voice message his father sent to him was, “Son, they are taking me.”

Altay said he doesn’t know whether his father is still alive, as he had health problems; his 70-year-old aunt had already passed away in a reeducation camp.

Uyghurs believe that “there are at least 3 million people in the concentration camps,” Altay said.

Altay said his best friend from high school was taken to the hospital for a blood and urine test. Since then, his family has lost track of him, and they worry that he may have been killed for his organs.

Since there aren’t enough camps to hold all the Uyghurs, CCP officials now are living inside the homes of Uyghurs to monitor them, Altay said. He said some Uyghur girls have been raped; some “willingly” married those officials in order to save their families.

Meanwhile, since 2009, 155 Tibetans have set themselves on fire to protest the CCP’s cultural and religious genocide, Bhuchung Tsering, vice president of International Campaign for Tibet, said.

Yu Ming, a Falun Gong practitioner and a businessman who escaped from China at the end of 2018, spent almost 12 years in jails and labor camps. He said he was repeatedly stripped naked by groups of policemen and shocked with high-voltage batons. He was once tied to an iron chair for three months. The police used an awl and toothpick to prick his nails as part of their efforts to force him to surrender his beliefs.

When Yu and Sean Lin, representing the Washington Falun Dafa Association, spoke, a dozen other Falun Gong practitioners stood behind them on stage, holding photos of family members or lawyers who are still jailed in China, either for practicing or for defending Falun Gong.