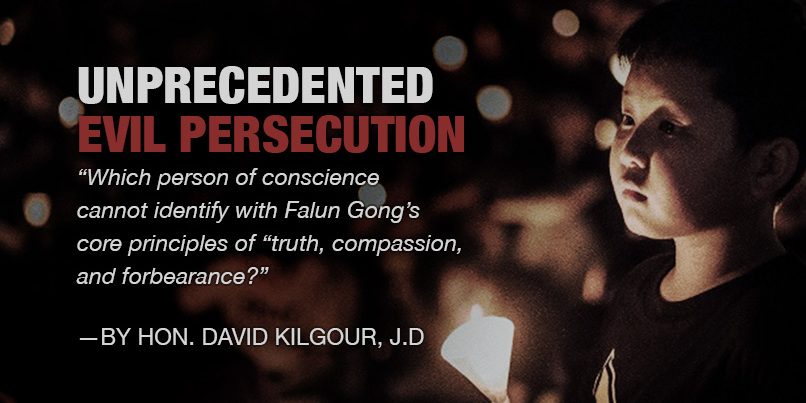 In his remarks prepared for a five-city book release tour across Taiwan, in August 2015, David Kilgour discussed the illegal organ harvesting in China, the persecution of Falun Gong, and the current Chinese economic outlook, among other topics.

Let me begin with congratulations. On June 12, 2015, the Taiwanese Legislative Yuan passed with bi-partisan support amendments to your Human Organ Transplantation Act, creating one of the most advanced and humane medical transplant laws in the world.

It bans the sale and purchase of organs for transplantation as a crime against humanity, with a special consideration of the use of organs from executed prisoners in China. The law prohibits the selling, buying, and brokering of organs and transplant tourism. The Department of Health will now require major medical institutions and physicians to register all organ sourcing and the hospital information (including surgeon identification) where patients received their organ transplants abroad when they apply for post-operative health insurance payments.

Patients receiving illegal organ transplants overseas will face a maximum of five years in prison and a NT$300,000 fine. The law supports transparency for foreign organ transplantations and ensures the safety of transplant recipients. Your new law should serve as an inspiration to other legislators around the world.

The effect of the law, according to my good friend Theresa Chu, spokesperson for the Falun Gong Human Rights Legal Team here in Taiwan and with us today, is to prohibit Taiwanese from going to China for organ transplants.

Which person of conscience cannot identify with Falun Gong’s core principles of “truth, compassion, and forbearance”?

The 20th century was probably the worst in recorded history for the brutality directed at faith communities by governments. Most victims perished at the hands of totalitarian regimes, which loathe all religions. Mao, Stalin, Hitler, Pol Pot, and others, who committed a vast range of what we now term crimes against humanity, murdered millions only for having a faith.

The antipathy towards religion by the Communist Party (CCP) in Beijing since 1949 is the first major reason for the persecution Falun Gong practitioners have faced across China since mid-1999 and up to the present.

The second was Falun Gong’s popular appeal across China after being introduced by founder Master Li Hongzhi to the public there in 1992. The phenomenal growth was partly because of Falun Gong’s deep roots in Daoism, Confucianism, Buddhism, and other prominent features of indigenous Chinese culture, physical exercise, and spirituality. These traditional features had been suppressed by Mao from 1949 until his death in 1976. By 1999, there were by the party-state’s own estimates more than 70 million Falun Gong practitioners across China—more than the then membership of the CCP.

Jiang Zemin’s biggest untruth, i.e., that Falun Gong is an “evil cult,” is reminiscent of messages the then government of Rwanda broadcast against the Tutsi minority before the genocide committed across that country between April and June of 1994. The Bolsheviks in Russia took a similar path against their own prescribed list of party enemies after the Revolution of 1917. Hitler’s Nazis used it against various communities, especially German Jews, after 1933.

There has been such a continuous toxic stream of propaganda against Falun Gong in party-state-controlled media across China after 1999 that many Chinese and persons outside the country appear to have accepted party-state lies on this and related matters.

Ian Johnson, a former Beijing bureau chief for the Wall Street Journal, who won a Pulitzer Prize for his reporting on Falun Gong, has lifted a number of curtains on the persecution in his 2005 book “Wild Grass:”

Professor David Ownby of the University of Montreal, who did specific research on Falun Gong and is cited in our report, concluded:

Ownby’s conclusion accords with that of many independent observers, including David Matas and myself. In the 130 or so countries where Falun Gong exists, there is only one, China (and possibly Mr. Putin’s Russia), where its practitioners appear not to be considered exemplary citizens. In none of the approximately 50 countries David Matas and I have now since our first report on organ pillaging/trafficking in China in 2006 have we heard a Falun Gong practitioner speak other than positively about other spiritual communities. Which person of conscience cannot identify with Falun Gong’s core principles of “truth, compassion, and forbearance”? The serenity and non-violence its practitioners have demonstrated in the face of myriad beatings, imprisonments, tortures, and murders across China since mid-1999 are astonishing.

One issue is clear beyond any doubt: Falun Gong, whose practitioners prefer to be termed an exercise group with meditation, rather than a religion, is not a cult.

The CCP appears in contrast to present a number of characteristics of cults. Mao Zedong was able to have party loyalists cause the deaths of tens of millions of fellow citizens in peace time by subscribing to such murderous policies as the “Great Leap Forward” and the Cultural Revolution.

By ‘teaching’ that outsiders are wrong, evil, dangerous, and to blame for the ills of the world, cults install phobias in their followers and lead them to end relationships with their families and the outside world. Most young people who turned on their parents during Mao’s time were under political pressure to do so, says Yin Hongbiao, a Beijing-based historian.

“Those with ‘bad parents’ suffered a lot and they resented their parents instead of resenting the system which brainwashed them daily,” adds Michel Bonnin of Tsinghua University. They were encouraged to denounce their parents as counter-revolutionaries, so as to “draw a line” between them and the enemy.

The Chinese people, with all their accomplishments during more than 5000 years, continue to be humiliated by self-appointed leaders.

‘Corruption Is the System’

The Chinese people, with all their accomplishments during more than 5000 years, continue to be humiliated by self-appointed leaders. The people are exploited in countless ways. Consider some of the many campaigns the CCP has launched since 1950:

Human dignity today appears to be indivisible. Faith communities and other civil society groupings everywhere should be fully united on issues like the ones Falun Gong practitioners have faced daily for too long across China. If the peoples in democratic and rule of law nations around the world don’t unite on such crimes against humanity, some of the world’s remaining dictatorships will only repeat the terrible ravages of the last century.

Flying to Taiwan from Ottawa, I read an excellent 2013 book about World War II, “Forgotten Ally,” by Rana Mitter, a history professor at Oxford University, which has relevance today, especially with the upcoming parade in Beijing marking the end of WWII. Much of Mitter’s work refers to Chiang Kai-shek and the key role he and the Nationalists in the Republic of China played in fighting Imperial Japan from 1937 until 1945. China lost between 15 and 20 million lives during these eight years.

Since 1949, official histories in China give the leading role in the war to the CCP, but it is clear from Mitter’s book which political group did most of the fighting and dying. Mao and the CCP seized power because terrible turmoil and suffering during the war years weakened and divided China and its people. Mao and his army were much less involved in the fighting, being located in northern Yan’an, in Shaanxi Province.

In 1942, Mao began his “Rectification Movement” by telling party members that the CCP “needs not only democracy but needs centralization even more.” Mitter notes that this meant in practice “intense devotion to the study of Mao’s works, and a thoroughgoing, almost religious commitment to the goal of the Chinese Communist Party.” Later, the author notes that Kang Sheng, who had been trained in Moscow in terror methods, used a classic Soviet technique “of accusing loyal party members of being Nationalist spies. Once they had confessed under torture, their confessions could then set off an avalanche of accusations and arrests.” In short, while Chiang has understandably been much criticized in many places, including Taiwan and Canada, it appears that Mao largely reaped the fruits of his rival’s war efforts.

As a longtime admirer of Taiwan and its people, let me close by saying that in terms of governance, the rule of law, human dignity, economic management, and so on , this country is what China should be, can be, and I believe will be a much sooner than some think.

On economics, for example, Joe Nocera pointed out this past week in theInternational New York Times that China’s “debt load today is an unfathomable $28 trillion.” The Financial Times reports that a “national team” of state-owned investment funds and institutions have spent about $200 billion attempting to prop up their stock market, which isdown 37 percent since mid-June. Large sums continue to be removed from China by both nationals and foreigners; the regime is spending billions daily to manipulate both the currency and share prices on the Shanghai exchange. In short, the crony capitalism/Maoist governance/”beggar thy neighbor” model might not yet be collapsing, but it is certainly experiencing severe strains. The Tianjin tragedy and its opaque handling before, during, and after the explosions have done little to help the party-state in Beijing with the people of China.

David Kilgour, a lawyer by profession, served in Canada’s House of Commons for almost 27 years. In Jean Chretien’s Cabinet, he was secretary of state (Africa and Latin America) and secretary of state (Asia–Pacific). He is the author of several books and co-author with David Matas of “Bloody Harvest: The Killing of Falun Gong for their Organs.”