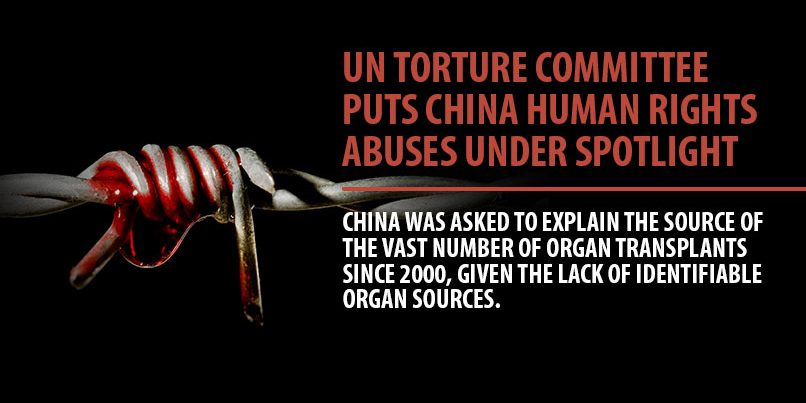 For the next month China will be coming under the microscope of a United Nations committee of experts, who will evaluate whether the communist nation has done anything to prevent the widespread use of torture in its detention facilities.

A battery of reports submitted by human rights groups on the eve of the review, conducted by the U.N.’s Committee Against Torture from Nov. 17, paint a grim picture indeed: not only has little been done by Chinese authorities to stop its police forces from torturing detainees, but the regime maintains a system that incentivizes them to do so.

Police and security authorities also regularly torture people not even suspected of crimes, including religious believers, human rights lawyers, and activists. For this group, security forces have even developed a sophisticated set of torture techniques and instruments to facilitate the process.

All this was explored closely by Amnesty International in its submission titled, “No End in Sight: Torture and Forced Confessions in China.” The report, one of many submitted to the United Nations Committee Against Torture, features chilling accounts of persecution against Chinese human rights lawyers and their clients—activists, petitioners, and spiritual practitioners.

A typical case is narrated byTang Jitian, a Beijing-based lawyer. He and three colleagues were investigating an extralegal detention facility in the northeastern province of Heilongjiang in March 2014 when they were detained by local public security forces.

“During the detention, I was first strapped to an iron chair, slapped in the face, kicked in the legs, and hit so hard over the head with a plastic bottle filled with water that I passed out,” Tang told Amnesty.

Yu Wensheng, another Beijing lawyer, was arrested by political police on Oct. 13, 2014, allegedly for “disturbing public order.” He was detained for 99 days, and interrogated about 200 times. Police officers tied his hands to the back of an iron chair, causing them to swell so painfully that he “didn’t want to live.”

“The two police officers repeatedly yanked the handcuffs. I screamed every time they pulled them,” Yu said.

Chinese security forces subject the clients of the lawyers to similar forms of torture. Guangdong attorney Ge Bingyuan described the abuses a female practitioner of Falun Gong, a persecuted spiritual practice, he was representing this year: Guards tied her legs with a 55-pound leg-cuff for 31 days; at another detention facility, they put chilli in her mouth, denied her use of the toilet, got females inmates to beat her, and tied her to a bed and used hangers and plywood to beat her.

When she refused to “study”—likely brainwashing material—the guards made two female inmates stretch her arms to the back and kneel and face the wall for “confession.”

Tang, Yu, and Ge are among 37 Chinese rights lawyers Amnesty interviewed for their 54-page report.

Amnesty asserts in the report that the Chinese regime is still practicing the medieval art of torture—the use of “tiger benches” (in which the legs are bound tightly to a bench, and bricks are added under the victim’s feet, forcing the legs to bend backward), and iron restraint chairs—despite its rhetoric that it is making progress in implementing the rule of law.

Torture is used serially to extract confessions from detainees.

In an examination of 590 court documents where lawyers said that their clients made confessions under torture, Amnesty found that in only 16 cases did a court of review suppress the evidence obtained through torture. In all those cases, except one, the individual was still convicted on other evidence.

The Chinese regime’s reliance on confessions to secure conviction provides an “almost irresistible incentive for law enforcement agencies to obtain them by any means necessary,” hence the continued prevalence of torture.

Civil rights lawyers who attempt to defend individuals subject to such abuses—whether through the criminal process, or those designated political enemies—are perceived to be “a challenge to the authorities’ legitimacy and the way they govern the country,” said Patrick Poon, an Amnesty International researcher author of the report, in a telephone interview from Hong Kong.

China was asked to explain the source of the vast number of organ transplants since 2000, given the concerns that many of those organs may have come from practitioners of Falun Gong, given the lack of identifiable organ sources.

In the face of evidence published in reports by human rights organizations, the Chinese regime remains adamant that torture is not being practiced.

“Extorting a confession by torture is explicitly banned by China’s laws. The person who is found exercising torture during interrogation will be subject to punishment,” China’s Foreign Ministry spokesman Hong Lei told reporters at a news conference when asked about the Amnesty report, according to The Associated Press.

The Chinese regime flatly refuted the UNCAT’s List of Issues report in June in an October response, most often without elaborating or addressing the details of the concerns.

In another instance, China was asked to explain the source of the vast number of organ transplants since 2000, given the concerns that many of those organs may have come from practitioners of Falun Gong, given the lack of identifiable organ sources. “Has anyone been sanctioned or otherwise relieved from duty or transferred for participating in involuntary organ transplants of Falun Gong practitioners?” the report asked.

China’s response failed to address the factual question, and simply called the allegations a “rumor” that had been “fabricated.”

Researchers in 2006 conducted independent investigations into allegations of organ harvesting, and estimated that between 45,000 and 65,000 Falun Gong practitioners were killed by the communist state for their organs, which were then sold for profit. Those estimates are now much higher, according to the researcher Ethan Gutmann, who has published a book on the subject.

The Chinese authorities have yet to provide a substantive response to the evidence and allegations.