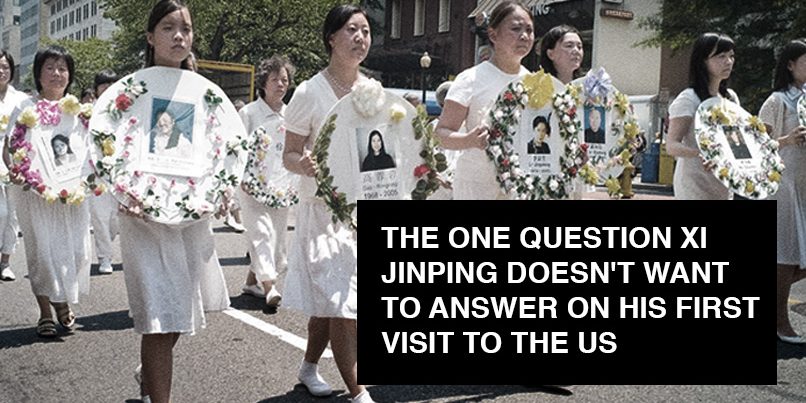 Washington, Sept. 24, 2015 — Will Xi Jinping end the ongoing forced organ harvesting of the Falun Gong, the Christians, Catholics, Tibetans and other religious and minority groups in China? Pope Francis described the trade in organs a crime against humanity, calling for an end of the immoral practice.

Xi Jinping is in the primary position to reform China’s notorious human rights record that exacerbated with predecessor Jiang Zemin, staining China with the unlawful harvesting of human organs from prisoners of conscience. President Xi’s first visit to the U.S. is a strategic opportunity to define and distance himself from the infamously corrupt former leadership.

“Ending the humanitarian atrocity of organ harvesting from prisoners of conscience is the litmus test of credible change in China. Acknowledging that organs were, and continue to be, harvested from prisoners of conscience is a vital step to end this crime against humanity. After decades of unethical forced organ harvesting, with a probability of hundreds of thousands of Chinese people having been killed for their organs, and the repetition of unfulfilled announcements to stop, independent and transparent verification is mandatory,” says Dr. Torsten Trey, Executive Director, Doctors Against Forced Organ Harvesting.

When Chinese officials announced in December 2014, under global condemnation, to end the unethical organ harvesting from executed prisoners by January 2015, many western organizations applauded in support and grasped at this straw. However, prisoners of conscience were excluded from the announcement and the full scope of abuse of this victim group is unknown. Despite mounting international pressure to provide transparency, Chinese authorities have not responded.

After launching an unlawful persecution against the Falun Gong in 1999, then president Jiang Zemin, instigated forced organ harvesting against the group, causing a sudden skyrocketing surplus of tens of thousands of organs that has fueled the exponential growth of China’s transplant business.

Scrutiny and the duty of care by the international medical community remain subdued, and the reaction to China’s secrecy, failed promises of reform and lack of accountability is unsatisfactory. Human rights groups have called on the United Nations Human Rights High Commissioner to institute a process to determine if China has stopped unlawful forced organ harvesting. And, with mounting global concern, over 2,000,000 people have signed a global petition authored by DAFOH asking the UN to act.

Doctors Against Forced Organ Harvesting aims to provide the medical community and society with objective findings of unethical and illegal organ harvesting. Organ harvesting, the removal of organs from a donor, without obtaining prior free and voluntary consent, is considered a crime against humanity, as well as a threat to the integrity of medical science in general.