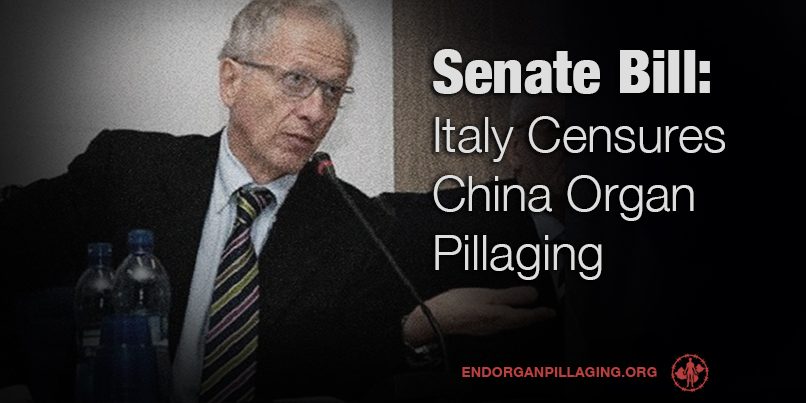 The Italian Senate has approved a bill that would introduce harsh penalties against individuals who knowingly traffic in human organs. In their discussion of the proposal before the vote, senators focused their outrage on China’s organ transplantation system, which they said has lead to the organized murder of tens of thousands of innocents.

“China is second only to the United States when it comes to the number of transplants,” said Sen. Maurizio Romani, who proposed the bill. But China has no established procedures for procuring organs from brain dead patients—the backbone organ source in Western countries. It also has no national organ-sharing system. Yet it boasts roughly 10,000 transplants per year—far less than the number of executed prisoners. Where do the other organs come from? asked Romani on the senate floor.

“The answer is dramatic.” Prisoners of conscience are the remainder source, he said, “especially practitioners of the spiritual discipline Falun Gong. They’re killed for their organs.”

“I use the term cannibalism to describe this,” he added.

“We in Italy can’t stop these violations, but we have the duty to make any effort in order not to be accomplices to this.”

The bill, which would amend parts of the Penal Code to introduce and increase punishments against organ trafficking, is aimed at preventing Italian citizens from journeying to China to receive transplants and deterring doctors from facilitating such arrangements.

Profits in the global black market for organs are anywhere between $600 million and $1.2 billion per year, according to Global Financial Integrity, a nonprofit research group in Washington, D.C. While India and Pakistan are guilty of such transactions, researchers draw attention to China’s system for its state support, scale, sophistication, and brutality.

I use the term cannibalism to describe this.

The bill stipulates prison terms from 3 to 12 years and fines from between 50,000 and 300,000 euros for facilitating transactions with organs from living people. Advertising or encouraging transplant tourism—that is, patients traveling to countries like China to receive an organ—is also punished, with doctors to face life disbarment.

The bill will next be voted upon in the Chamber of Deputies, the other house in Italy’s bicameral Parliament, before it goes into law.

Similar legislation has been proposed in New South Wales, a state in Australia; Israel has also passed laws to prevent transplant tourists being covered by medical insurance, in order to deter Israelis traveling to China to receive illicitly obtained organs.

Members from all sides of the political spectrum expressed strong support for the bill, which passed 212 votes to 1. The discussion period leading up to the vote was charged, with Sen. Ivana Simeoni saying there are “documents which dispel any doubt” that mass scale organ harvesting has taken place in China. “Only to think about this commoditization of the human body makes me shiver.”

Sen. Sergio Lo Giudice, member of the ruling Democratic Party and also a member of the Human Right Commission, has followed the bill closely from its inception, when human rights lawyer David Matas spoke to the Commission of the Italian Senate on Dec. 19, 2013.

Only to think about this commoditization of the human body makes me shiver.

Lo Guidice briefed his colleagues on the background of Falun Gong, a popular traditional spiritual practice in China, and its persecution by the Chinese authorities since 1999. He introduced the work of investigators Matas and David Kilgour, a former Canadian parliamentarian, who published a report, and then a book in 2006 and 2009 respectively, describing in detail the evidence that mass harvesting of Falun Gong was taking place.

The European Parliament and bodies with the United Nations have also called for investigations into the evidence.

Senator Domenico Scillipoti compared China’s organ harvesting to the organ trafficking performed by the Islamic State of Iraq and Syria.