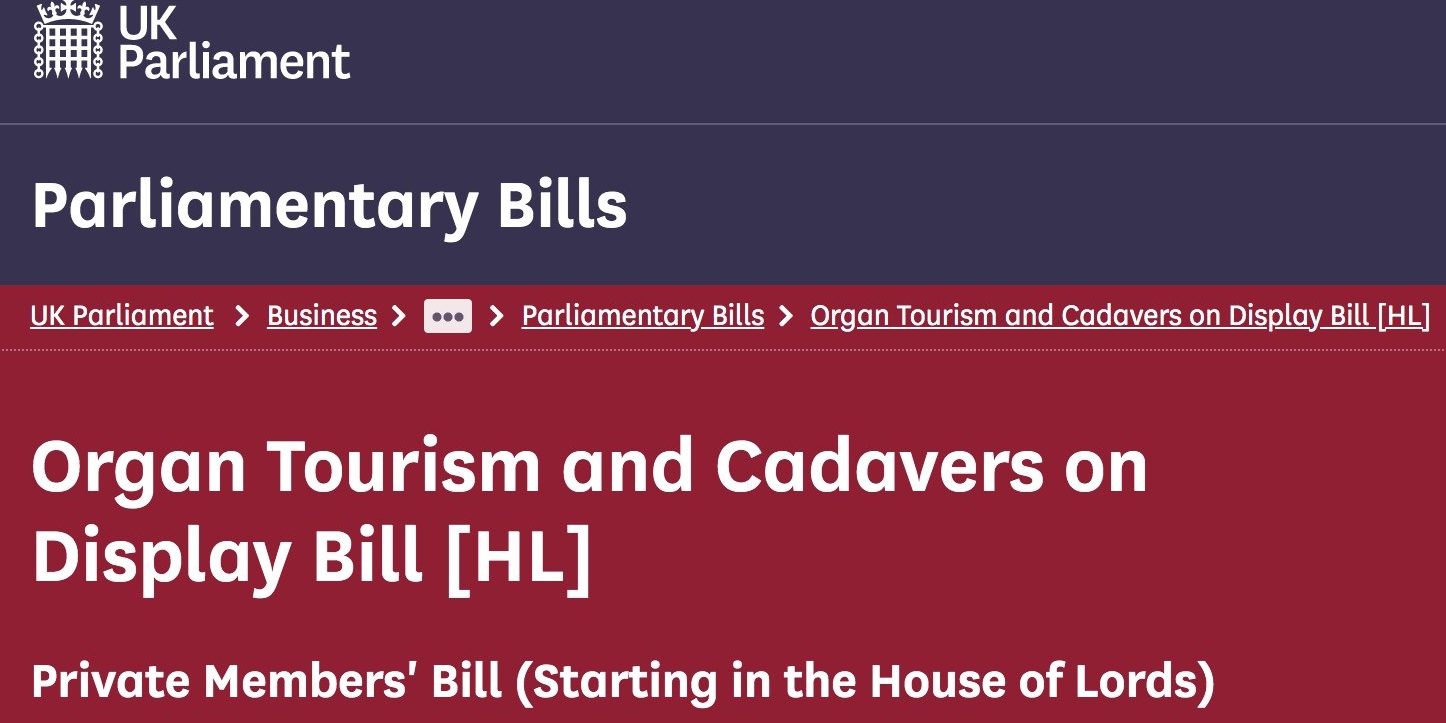 Lord Hunt of Kings Heath’s Organ Tourism and Cadavers on Display Bill, had its Second Reading in the House of Lords, 16th July 2021. This was the Bill’s first parliament debate.

The aim of Lord Hunt’s Bill is to protect UK citizens from complicity in forced organ harvesting and organ trafficking by ensuring ethical organ transplantation for British citizens when abroad and prohibiting imported bodies being put on display in the U.K. without prior consent from the deceased.

Twelve cross-party Lords and Baronesses spoke, all in support of the Bill. Lord Hunt told the House, “The commercial exploitation of body parts in all its forms is surely unethical and unsavoury. When it is combined with mass killing by an authoritarian state, we cannot stand by and do nothing.”

In March 2020, The China Tribunal, an independent tribunal chaired by Sir Geoffrey Nice QC, released its Full Judgement, which included the following conclusions, “Forced organ harvesting has been committed for years throughout China on a significant scale and … Falun Gong practitioners have been one – and probably the main – source of organ supply.” And that, “In regard to the Uyghurs the Tribunal had evidence of medical testing on a scale that could allow them, amongst other uses, to become an ‘organ bank’.”

It was revealed during the debate there are 29 cases on the Transplant Registry of patients being followed up in the UK after receiving a transplant in China, over the last 10 years. Reporting where the organ was obtained isn’t mandatory, so the real number is unknown. With a total of 566 cases of UK residents traveling abroad for organ transplants in the last 20 years.

Though the numbers of U.K. residents who have engaged in transplant tourism are relatively small, those traveling to China are most likely, whether they realise it or not, receiving organs sourced from prisoners of conscience who are killed on demand. This could  make them complicit in forced organ harvesting, a Crime Against Humanity.

“China appears to have been killing persecuted religious minorities, particularly Uyghurs and Falun Gong practitioners, then harvesting and selling their organs on an industrial scale… We cannot legislate directly against China’s despicable organ trade, but we can close the loophole in the Human Tissue Act 2004 that makes us complicit” Expressed Baroness Finlay of Llandaff, a Welsh doctor, professor of palliative medicine and Crossbench member of the House, who spoke during the debate.

Lord Bishop of St Albans who also spoke in support said, “We know that, back in 1984, harvesting organs from political prisoners was permitted in Chinese law. We know that the subsequent crackdown against the Falun Gong in 1999 meant that many of its members are likely to have been subject to forced organ harvesting. It is rumoured that, in the 1990s, prisoners of conscience of Uighur origin were the largest source of organs, before being surpassed by Falun Gong. Now, however, the Uyghurs are again in the sightlines of the Chinese Communist Party, and the accounts of harvesting organs are rising.”

Many peers mentioned how such legislation would send an important message worldwide. Lord Hunt, who is notably a former Minister of State in the Department of Health and Labour peer, told the House, “I have always believed that the UK Government could be a powerful advocate for changing these practices”

It was mentioned during the debate that in June 2021, 12 United Nations Special Procedures mandate holders raised the issue of forced organ harvesting with the Chinese Government, in response to credible information that Falun Gong practitioners, Uyghurs, Tibetans, Muslims and Christians are killed for their organs in China. The correspondence is due to be released soon.

Lord Alton of Liverpool, vice-chair of the all-party parliamentary groups on Uyghurs and Hong Kong and as a patron of the Coalition for Genocide Response said, “Dr Enver Tohti, a Uighur doctor, described to me how he had been required to remove organs and ordered to “cut deep and work fast” on a victim who was still alive. The theft of organs has been described as an almost perfect crime, because no one survives. However, the crime does not end there: there is a further twist to this infamy. Anonymous, plastinated corpses taken from Chinese prisons have been paraded in a carnival of horrors at money-making exhibitions—a final sneering insult to these victims.”

The Lords referred to the ‘Real Bodies Exhibition’ an exhibition by American owned company, Imagine Exhibitions, that visited the National Exhibition Centre (NEC) in Birmingham. It consisted of real corpses and body parts that had gone through a process of plastination whereby silicone plastic is injected into the body tissue to create real life manikins, or “plastinated” bodies. The deceased human bodies and body parts were described on the NEC website at the time, as “unclaimed bodies” and revealed to have no identity documents or consent, sourced from Dalian Hoffen Biotech in Dalian, China.

A similar exhibition, “Bodies…the Exhibition” by Premier Exhibitions, which also sourced its plastinated bodies from Dalian Hoffen Biotech, reached a settlement with the New York State Attorney General in 2008 and was consequently forced to display a disclaimer stating:

Lord McColl a British Surgeon, professor and Conservative member of the House of Lords, remarked, “The numbers involved have shocked the world, but is the world going to repeat its failure to take action against the Nazi atrocities, which also included horrific medical experiments on prisoners? Instead of an effective response to China, the West continues to allow it to buy up our industries, enabling the Chinese Government’s plan to dominate and control the world. When will the world wake up and take effective action?”

Lord Mackenzie of Framwellgate, a non-aligned member of the House of Lords and former President of the Police Superintendents Association added, “We cannot stand idly by while fellow human beings are dehumanised in such ways. The Bill enables us to metaphorically not cross over to the other side of the road but, like the good Samaritan, do what we do best in this country and apply our long-held values to help our fellow human beings enjoy the human rights we take for granted.”

The cross-party of supportive Lords mentioned how other countries such as Spain, Italy, Taiwan, Israel, Belgium, Norway and South Korea have already taken legislative action to prevent organ tourism to China. It was also remarked how some countries have already taken legislative action to stop the touring body exhibitions where prior consent has not been given by the deceased, including France, Israel, Hawaii, The Czech Republic and various cities in the U.S.

France has banned commercial exhibits of plastinated bodies entirely. A step that Baroness Thornton, Shadow Spokesperson for Health, believes the U.K. government should also take, “it seems likely that all the exhibitions which use plasticised cadavers and foetuses for supposedly educational purposes could use modern materials and production to create the same exhibits. That begs the question: why use cadavers and human body parts at all? If the answer is that people want to see such things and will pay to do so, I remind noble Lords that people used to flock in their thousands to see public executions until 1868.”

Though sympathetic to the issue, the Minister’s response suggested that the Bill was not necessary as U.K legislation already covered what the Bill sought to do stating, “The Government agree wholeheartedly that this is an important issue, but it is one that our laws already address, although we can do a lot more to increase awareness of the dangers involved. Therefore, I advise that the Government have expressed their reservations and oppose the Bill.”

How, at least 29 U.K. citizens have managed to lawfully travel to China for organ transplantation, was not addressed by the Minister during this debate, though he did explain the Human Tissue Authorities have updated their code of practice for imported bodies on display in an effort to stop unethical body exhibitions, stating that “the same consent expectations should apply for imported bodies and body parts as apply for such material sourced domestically.” Though this has not been written into law.

In an effort to be helpful the Minister did however promise the House efforts he would commit to on the issue, “I want to be helpful. Therefore, I commit to this House today to step up efforts with the Human Tissue Authority and NHS Blood and Transplant to promote more awareness of this issue through their websites, social media and their connections with professional societies, transplant centres and clinical communities so that everyone plays their part. I also plan to convene a round-table event with the Human Tissue Authority, NHS Blood and Transplant and members of the stakeholder forum to discuss what further action is needed and how the Government can help.”