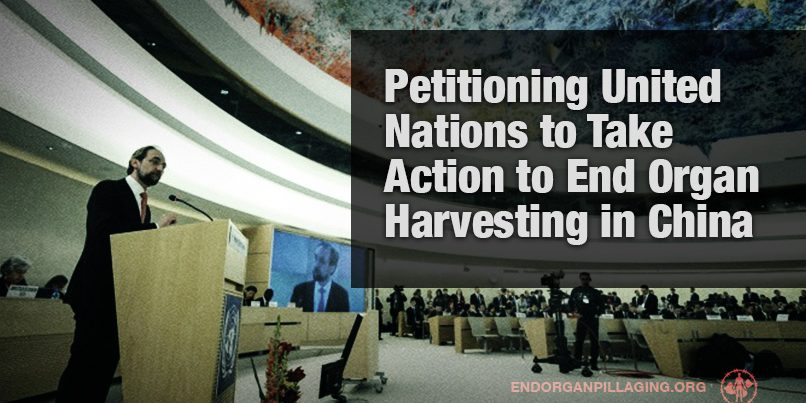 During the 29th Human Rights Council session in Geneva, on June 15, United Nations High Commissioner for Human Rights Zeid Ra’ad Al Hussein pledged to defend the world’s downtrodden and disenfranchised “without fear or favor” regardless of the victim or perpetrator’s identity and credentials.

And on Monday, four leading international rights groups urged the UN to “move from words to deeds and actions” on a long-standing human rights violation in China: organ harvesting from prisoners of conscience. It is an abuse that, despite its severity, has not attracted the kind of global scrutiny and censure that would be expected if it was committed by a country of less global heft.

“As organizations committed to preserving human rights, we are deeply concerned about forced organ harvesting—organ procurement without free, voluntary consent—from prisoners of conscience in China, which is a crime against humanity and violates the core values of the United Nations Charter,” wrote representatives of the four rights groups—Doctors Against Forced Organ Harvesting (DAFOH), the Nonviolent Radical Party, Transnational and Transparty, the Swiss branches of the Society for Threatened Peoples and the International Society for Human Rights—in an open letter to High Commissioner Hussein.

The letter follows up an earlier initiative by DAFOH to get the UN to recognize and confront the Chinese communist regime on the issue of forced organ harvesting. From 2012 to 2014, DAFOH addressed a petition signed by over two million to the UN High Commissioner for Human Rights, but didn’t receive a response.

Allegations that Chinese hospitals were engaged in harvesting organs from practitioners of Falun Gong—a spiritual discipline persecuted by the Communist Party in 1999—first surfaced in 2006. Researchers have since been gathering evidence which indicates that public and military hospitals in China have been engaging in a profitable organ trade supplied by tens of thousands of prisoners of conscience—mainly Falun Gong, and also including Uyghurs, Tibetans, and Christians.

In the open letter, the authors also asked the United Nations to start “an office or working group” to direct “global efforts to stop the various forms of abuse of transplantation medicine, such as transplant tourism and forced organ harvesting from victims who do not provide free, voluntary consent or are being killed in the process of organ procurement.”

The United Nations had earlier tackled the issue of forced organ harvesting, albeit in a piecemeal manner. U.N. Special Rapporteur Manfred Nowak said the first investigative report on organ harvesting by David Kilgour and David Matas showed a “coherent picture that causes concern,” and asked the Chinese regime for a “full explanation of the source of organ transplants.” In March 2007, the United Nations Committee Against Torture called on the regime to conduct an “independent investigation” into the reports; no reports of an investigation have been released by the Communist Party.

This year, individuals in the Chinese regime and organizations around the world have taken a step forward in acknowledging the organ harvesting allegations and the documenting of the crime.

In a series of public interviews in March, China’s organ transplant czar Huang Jiefu strongly indicated that Zhou Yongkang, the recently purged Chinese security boss, was the one behind the harvesting of organs from executed prisoners.

Huang then characterized organ harvesting as a “filthy, intractable, sensitive and forbidden area,” going back on earlier statements made to the state-run China Daily and the Australian Broadcasting Corporation that the use of organs from executed criminals was acceptable by Chinese standards.

In a statement, DAFOH called on the Chinese regime to be fully transparent on the issue, pointing out that Chinese hospitals was still revising their organ transplantation numbers to reflect lower figures than previously listed.

Meanwhile, a documentary exposing the systematic transplantation crimes in China, “Human Harvest: China’s Illegal Organ Trade,” won a Peabody Award at the 74th edition of the prestigious broadcast awards ceremony in New York City on May 31.

Director Leon Lee interviewed the researchers of organ harvesting—Nobel Peace Prize nominees David Kilgour and David Matas, and investigative journalist Ethan Gutmann—as well as persecuted Falun Gong practitioners who made it out of China after having gone through the procedures before forced organ harvesting, such as multiple blood testing in labor camps.

Kilgour and Matas estimated about 40,000 to 60,000 people have lost their lives for their organs in China. In his book The Slaughter, Gutmann estimates the death toll to be 65,000. All three researchers suspect that the actual numbers are much higher.