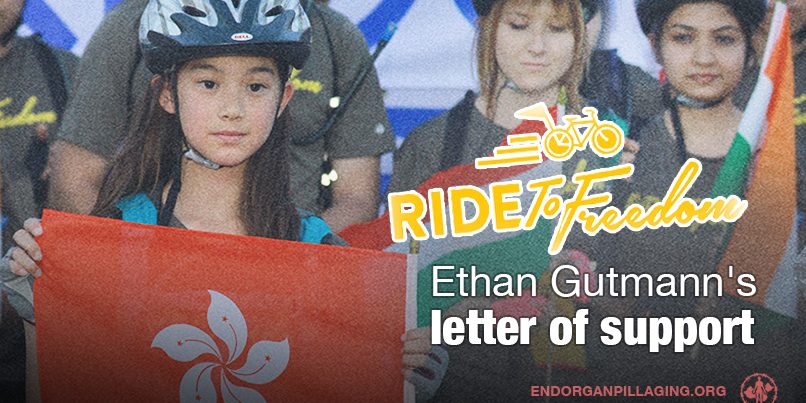 What an interesting time for the Ride2Freedom to appear on the horizon. In China, the twilight of the Falun Gong persecution is said to have arrived. Lawsuits against Jiang Zemin are no longer being blocked. Zhou Yongkang, the ogre of organ harvesting himself, has received a life sentence. Bo Xilai, Gu Kailai: their brutal machinations are history. Wang Lijun, the police chief who directed that thousands of human beings should be butchered on the operating table, has disappeared down the memory hole.

Yet the Chinese legal system serves but one master: The Chinese Communist Party and whatever cabal is ascendant within it. So the fate of the remaining Falun Gong practitioners, incarcerated by the hundreds of thousands throughout China’s Laogai system, are subject to Xi Jinping’s political calculation. Perhaps Xi actually believes that he can write off the forced organ harvesting of at least 65,000 Falun Gong practitioners (and uncounted Uyghurs and Tibetans and House Christians) as an error of a predecessor and a few bad apples? Perhaps he calculates that Chinese political culture is so intellectually stunted, that it will accept his familiar “Gang of Four” gambit as fresh and exciting. In the words of the medical arbitrator of Chinese forced organ harvesting, Dr. Huang Jiefu: look to the future. Forget the past.

But what if, just this once, the Party has it wrong? What if there was an issue so deadly to the Party, so irresistibly personal, so universal and yet so inseparable from the mass murder of the last 16 years, that it cannot be ignored? And what if the call to recognize that issue came, not from aging western analysts such as myself, but from a small corps of young people – wise in the ways of China, but filled with the open intellectualism of the West, brimming over with health, resolve and what can only be described as the purest, most positive, form of moral fury?

I am speaking of the Ride2Freedom and the cause that they ride for: the Falun Gong orphans.

There is no greater cause and I speak from experience on this point. For in my fifty-plus interviews with Falun Gong refugees from labor camp, there was no more painful moment then when I asked about family, particularly children, left behind. An interview which had been rooted in objective fact and level-headed analysis would suddenly collapse into unplanned and uncontrolled weeping. Of all the crimes committed by the Chinese Communist Party in its persecution of Falun Gong, the destruction of the families is the most unforgivable.

The destruction of reputations, of history, is, for China’s intellectual development, an even greater offense. For example, take one of the sons of the Changchun television hijackers: Liu Tianchun. He is a young man now. His father, “Great Sea” was killed like an animal when he was three yet from the perspective of human history, Liu’s father was an unambiguous hero. Does Liu know that his father assisted at the birth of the global Internet freedom movement? “Look to the future”? The Falun Gong orphans are the future – but only if they are given the intellectual freedom to find the past they will have the tools to lead. Until then, how the Party views young men like Liu Tianchun – well, this is the litmus test. When the Party accepts that the Falun Gong orphans are a legitimate issue, we shall justifiably celebrate the end of the persecution. Until then, you ride in twilight.

So may I offer one word of advice to the riders? Don’t get hung up on the numbers. I mean, the numbers of “likes,” and selfies and so on. They give encouragement but like sugar, the effect of Western social media is fleeting and depletes your reserves.

Believe in what you are doing. Tell the truth. Take joy in it. It may be considered a cliché, but Margaret Mead’s point has never been improved on: “Never doubt that small group of thoughtful, committed citizens can change the world. Indeed, it’s the only thing that ever has.”

The important numbers are in China anyway. They remain uncounted. Falun Gong orphans: unknown. Families that have lost a loved one through labor camp brutality or, far more statistically likely, through a medical procedure that defies civilized description: unknown. And yet these families and orphans are the rightful moral arbitrators of China’s future.

Give them a voice. On the thousands of miles that you ride, consider that every tenth of a mile is marked out by the body of an individual who would not betray their friends and would not betray their consciences. These are your numbers, your “likes,” your cheering crowds. You honor them. In the twilight, they ride with you. Godspeed riders.

On June 1, young cyclists from around the world will embark on a 3,000 mile journey to raise awareness for and rescue five children in China targeted for persecution, simply for following the spiritual practice of Falun Gong.

They will rally their way across the country, meeting with supporters at every stop. Starting in Los Angeles, they will ride over 3,000 miles in 45 days and pass through 19 cities before reaching Washington D.C. for a special hurrah with national leaders. From there, the team will travel to New York City to address the UN General Assembly.