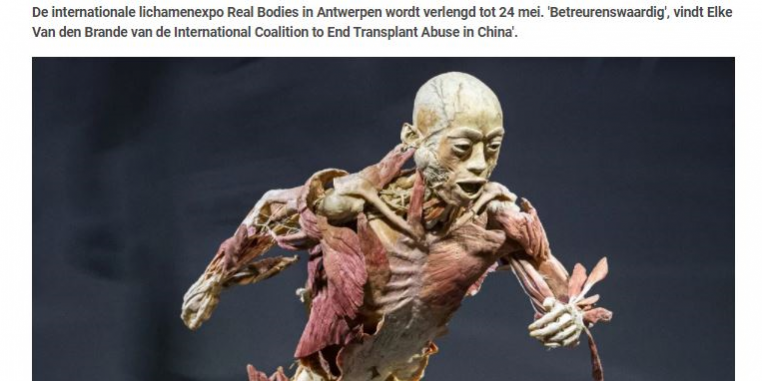 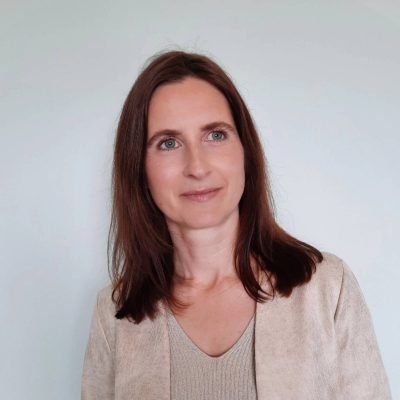 On February 15, 2021, an interview about the ‘Real Bodies’ exhibition in Antwerp (Belgium) with Elke Van den Brande, ETAC’s national manager for Belgium, the Netherlands and Luxembourg, was published on Knack.be.

Knack is a Dutch-language Belgian current affairs and opinion magazine. Together Knack Magazine and the Knack.be website attract the most readers of all titles in the Flemish quality press.

The publication is titled ‘A body of a murdered person can never be exhibited respectfully’ by Trui Engels.

The international body exhibition Real Bodies in Antwerp will be extended until May 24. ‘Regrettable’, says Elke Van den Brande of the International Coalition to End Transplant Abuse in China.

‘Warning: the plastinated bodies you will see at the Real Bodies body exhibition in the Antwerp Sportpaleis come from Chinese prisoners who were tortured and executed’, according to the International Coalition to End Transplant Abuse in China (ETAC).

‘The fact that the expo was extended until May 24 is really regrettable’, says Elke Van den Brande. ‘It is at least not in accordance with the spirit of the law on the acquisition and use of human bodily material for the purposes of medical application to humans or scientific research. To be able to speak of an ethically responsible exhibition, there must be authentic statements of identity and cause of death. In addition, permission must be given for any form of education and research, so with an explicit mention of a public, commercial exhibition. The organization has already admitted that it does not have such documents for these bodies and organs.’

The fact that there is no consent from the donors could be due to the origin of the bodies. According to ETAC, the corpses on display may include those from prisoners of conscience who were held in the large-scale prison and labor camps near the Dalian plastination company, which preserves the bodies. “It mainly concerns practitioners of the Falun Gong meditation practice, who have been heavily persecuted by the Chinese government since 1999,” Van den Brande explains. Dalian is an epicenter of organ transplantation, plastination and the suppression of Falun Gong. The fact that the bodies in Real Bodies are about 20 years old means that they were plastinated in the early years of the persecution of Falun Gong, along with the exponential growth in organ transplants in China. ”

When asked for a response, the organization of Real Bodies, Imagine Exhibitions, refers us to a statement on their website where they answer ‘frequently asked questions and statements in all transparency’: ‘The specimens are unclaimed bodies donated to medical universities in China by appropriate authorities. The copies on display at the exhibition have been legally donated. These people were never prisoners anyway, showed no signs of trauma or injury, were free from contagious disease and died of natural causes,’ it says.

Why do you doubt the words of the organization?

Van den Brande: ‘There are indications that the bodies used for plastination did not originate from donations, nor from unclaimed bodies. Donation is very rare in China for cultural reasons. Gunther von Hagens (the inventor of the plastination technique, ed.) said: “In China it is impossible to obtain donated bodies”. Only since 2010-2014 did a pilot project for voluntary donations run. In addition, the UK Parliament recently concluded that the bodies in Real Bodies, on display in Birmingham in 2018, “likely come from executed prisoners from China.” The topic was raised in the context of the new Medicines and Medical Devices Bill, which requires all human tissues and cells imported into Britain for medical and scientific purposes with a donor consent.

Should Real Bodies be banned in Belgium, or at least accompanied by a warning?

Van den Brande: ‘In New York, an organizer of a similar exhibition, Premier Exhibitions, was obliged by the Attorney General in 2008 to post a notice at the entrance that he could not independently verify that the plastinates did not originate from individuals held in Chinese prisons. Furthermore, it seems appropriate to us that, for example, the import of plastinated tissues manufactured in countries that apply the death penalty should be banned for ethical reasons. Exhibitions with plastinates from China are more and more banned, as is the case in France, the Czech Republic, Israel, Hawaii and various cities in the US.’

What do you think about the argument of doctors such as Luc Beaucourt, Lieven Maesschalck and Pedro Brugada, who support the exhibition, that the ‘educational aspect is incredibly valuable’ and that the bodies are ‘displayed with respect’?

Elke Van den Brande: ‘A body of a person who was murdered and/or did not give permission, can never be exhibited respectfully. Education can only be valuable if it does not involve crime. More than ever, other innovative didactic materials are available for learning about anatomy and pathology, both for education and for the general public, without these reprehensible practices. Just think of digital simulations.’

For decades, China has been accused of murdering innocent prisoners of conscience to sell their organs for transplantation. What is the volume of organ harvesting?

Van den Brande: ‘Both the plastination and transplantation industries are dependent on a large supply of so-called ‘donors’. Organ transplantation requires the right match and plastination factories try to meet the demands of schools, universities and exhibitions worldwide. In 2000-2001 there were an estimated 500,000 to 1,000,000 Falun Gong prisoners. (ADDITIONAL NOTE ADDED AFTER PUBLICATION – Evidence about transplant volumes in China, published in 2016, shows that China is performing 60,000–100,000 transplants per year, as opposed to the much smaller numbers (10,000–20,000) that are officially reported.) The police assist both the plastination and transplantation industries. There is some evidence that there are bodies that serve both purposes. For example, an intercepted e-mail says: “This morning two fresh, top-quality bodies arrived at the factory. The livers were only removed a few hours ago.” It is striking that there were also bodies on display whose liver and kidneys were missing.’

China announced in 2015 that it would stop illegal harvesting and trafficking of organs. Has that happened in the meantime?

Van den Brande: ‘No. China has been publishing official data on organ transplants since 2015, claiming that all organs come from voluntary donors. However, in 2019, a detailed statistical analysis showed that the data is systematically falsified. Since 2006, researchers have been calling Chinese hospitals and posing as a patient in need of an organ. Doctors admit that they used Falun Gong practitioners as organ sources. Recent phone calls from 2018 and 2019 also show that organs are immediately available and that they come from healthy, young people. The director of Yantai Yuhuangdong Hospital confirmed in 2017 that he bypasses the official organ distribution system, performs hundreds of transplants and has his own channels to find organs. The China Tribunal, an independent people’s tribunal in London, concluded in 2019 that forced organ harvesting has been happening on a large scale throughout China for years, to this day, and that Falun Gong practitioners are probably the main source of organs.’

Are there any indications that Uyghurs, who are in ‘re-education camps’, are victims of forced organ harvesting?

Van den Brande: ‘There are currently more than a million Uyghurs locked up in Chinese prisons and labor camps. They are forced to undergo medical examinations, which merely indicate a preparation for organ transplantation and which are only carried out on prisoners of conscience.’