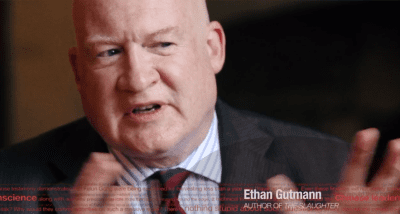 That’s the conclusion of a groundbreaking book on the practice of illegal organ harvesting in China.

The Slaughter: Mass Killings, Organ Harvesting and China’s Secret Solution to Its Dissident Problem, is the latest from Ethan Gutmann, a veteran China analyst based in London, England.

The book investigates China’s secret program to eliminate dissidents — Falun Gong, Tibetans and Uyghurs — while profiting from the sale of their organs. The purchasers are often from Western countries.

The Slaughter provides personal accounts from top-ranking police officials, nurses, doctors who have killed prisoners on the operating table and refugees who came close to being killed.

Gutmann’s writing on China has been widely published. He’s testified before the U.S. Congress, the European Parliament and the United Nations. He’s speaking on panels across Canada on a tour that brings him to Toronto on Thursday.

You were skeptical about the practice when you began researching. What was your turning point?

One was a phone call, which basically established that organs were for sale. (Another was) a refugee in Toronto describing being tortured, and her spiritual struggle. She mentioned that she had been given a physical exam — nothing about the physical made sense. It wasn’t to establish her health, it was only to establish the health of her corneas, her vital organs and lots of blood samples, which sounded a lot like tissue matching. What made it so persuasive is that she had no awareness that she had been under this kind of danger. I started running into this kind of example with many refugees, the same description of the same kind of exam again and again.

Tell us about the surgeons and executed political prisoners.

A leading surgeon was taken to an execution grounds and told to remove the kidneys and the liver of a man who he had just seen shot and was still alive. That was in 1995. Ten years later Dr. Wen-Je Ko from Taiwan was looking for a good price on organs for an elderly patient. He went to China and negotiated a lower price. But they also said “We know that you’re concerned about these organs coming from prisoners and you’re worried about hepatitis, drug addiction. We want to assure you that all of the organs will come from Falun Gong. These people don’t drink, they don’t smoke. We appreciate your discretion.” These doctors represent that breakdown of medical ethics that is occurring over the last 20 years.

Was it difficult to get witnesses to speak?

People had gone through very traumatic experiences, so often I had to interview them for a few days. By the second day they had sort of calmed down and could give me their story. Some of the witnesses defected from the police force in China or were from a medical background in China who had seen things. These people also needed some time to calm down and you had to gain trust. In some cases they had to be anonymous.

How do you confirm these first-person accounts?

You can’t always confirm these things perfectly. That’s why I spend so much time talking to people and getting to know them. It becomes much easier to assess their credibility. People who’ve gone through terrible trauma often have distortions in what happened. We do what we can to establish credibility. In many cases I threw perfectly good interviews out because I felt that the person was too interested in giving me the story they thought I wanted to hear rather than what had happened.

Why are such atrocities taking place in China, when the country is increasingly trying to link with the West?

I spent six out of 10 chapters on that question. One has to say that Falun Gong, Uyghurs and Tibetans have maintained a very stubborn and relentless challenge to this new China. A united China can dominate the world in many ways. The Falun Gong values, for example, are in many ways out of a traditional China — compassion, truthfulness. These are seen as weak values by the Chinese leadership. They do not want a kinder, gentler China. They want something quite different. That is part of the answer.

The need of living would trump a lot of other interests. People get very afraid for a loved one. I don’t know what I would do if my son needed medical help like this.

Would you purchase an organ in China?

No, but it would cross my mind. This is not an easy answer. I don’t blame people so much for going to China. This is a dilemma we can’t bypass. One of the things I want to do here is make people grapple with the issue. What would you choose to do is ultimately the decision your society needs to make.

Do you have any hope of this practice lessening or disappearing?

I am always hopeful that people will grapple with the truth, but it is also true that we are very late in the day. The number of casualties is close to 100,000. This is an ongoing crime against humanity. Canada has been one of the few countries willing to talk directly about Falun Gong with their Chinese counterpart. Israel made the decision to ban organ tourism to China. There’s no reason Canada can’t make that same decision. I think if it did, the rest of the world would follow in short order.

A panel with Gutmann on forced organ harvesting in China will take place at 3 p.m. on Oct. 23 at Toronto General Hospital. Register for the free event online.