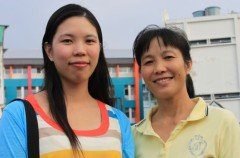 BANGKOK—The 30-something Thai woman waiting at the Bangkok bus station didn’t want to know what the young Chinese woman was asking her to sign, and so brushed her off with a shake of her head.

“I spoke a little bit of Thai but I think she suspected we were those people who want money or a donation,” said Feng Xiaoxin, a 25-year-old woman originally from southern China’s Guangdong Province who was collecting signatures to condemn state-sanctioned organ harvesting in China.

“[The Thai woman] just shook her head but after I showed her pictures and then she saw the petition form and read the information in the Thai language—she then finally understood, and wow her reaction was—she changed completely and she then asked the other people waiting for the bus to sign the petition and asked the police nearby to sign it also.”

Feng and her mother were collecting signatures for the “Petition to the UN Human Rights High Commissioner Calling for an Immediate End of Forced Organ Harvesting From Falun Gong Practitioners in China.”

The worldwide petition was organized by the NGO group Doctors Against Forced Organ Harvesting and it also called on the UN Human Rights Commissioner to “initiate further investigations that lead to the prosecution of the perpetrators involved in this crime against humanity” and call upon the communist regime to “immediately end the brutal persecution of Falun Gong.”

Falun Gong is a traditional spiritual practice that involves meditative exercises and living according to the principles of truthfulness, compassion, and tolerance. At the instigation of then-paramount leader Jiang Zemin, the Chinese regime began persecuting Falun Gong. Jiang feared its moral teachings might prove more attractive to the Chinese people than the Party’s ideology.

Feng and her mother collected signatures from locals and tourists alike in Bangkok since September right through to November 30, the petition’s deadline.

“One Australian man first thought I was talking about [the communists] taking organs from animals and then when he understood it was from people he was very upset and outraged,” said Feng.

In another case, Feng said she told a young Thai man about what was occurring in China and he asked for a blank petition form. He then told Feng to meet him a week later whereupon he returned the petition form to her filled with the names and signatures of his friends.

“It was hard work getting the signatures but it is worth it, people should know what is happening,” said Feng, who worked for an international business company back in China.

When Feng and her mother began gathering signatures for the petition, they had only been in Thailand for three months after fleeing their home country where they had experienced over a decade of state brutality and suppression because they practice Falun Gong.

When she was 14 years old, Feng and was arrested along with her grandmother, who is now in her mid-eighties and still in China. While detained for ten days the teenage Feng was subjected to harsh treatment and interrogated for information about Falun Gong practitioners in her area. She was forced to stay awake for three days straight and was, upon her release, forced to attend brainwashing classes.

Feng’s mother, He Zhiwei, spent a year in a labor camp as well as more time in several detention and brainwashing centers where conditions were harsh and designed to break the spirit.

While imprisoned she was tortured and on several occasions was forcibly deprived of sleep for periods longer than a week in a bid by guards to have her denounce her belief in Falun Gong.

In the Sanshui Labor Camp, He Zhiwei said that she, along with practitioners, had blood tests done, which were not performed on regular prisoners. When the camp’s authorities wanted to conduct internal body tests on her—she refused outright.

The medical advocacy body says that Falun Gong practitioners are the largest group of prisoners of conscience in China and are the main targets of this crime against humanity.

Overall, the petition to the UN gained almost 1.5 million signatures from 53 countries.