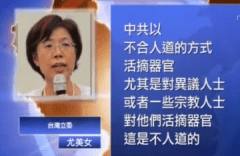 Upon the insistent exposure of the CCP’s brutal persecution of Falun Gong, especially the crimes of live organ harvesting from Falun Gong practitioners, many more international communities have stood up for justice demanding the end of the persecution. Recently, Parliamentarians Against Forced Organ Harvesting (PAFOH) in Asia branch was created, with 27 parliamentarians from Taiwan, Australia and Hong Kong.

Since early 2014, International Care Association of Organ Transplant and Human Rights Law Foundation in Taiwan have pushed forward the establishment of PAFOH.

Human Rights Law Foundation in Taiwan upholds the principle to “Disintegrate the CCP, End the Persecution, Punish the Culprits” and appeals to countries in the world: One, severely condemn the CCP atrocities of live organ harvesting from Falun Gong practitioners; disseminate truths of the live organ harvesting by use of all information channels, and require not to conduct organ transplantation in China.

Second, carry out immigration control: All entrants must declare whether or not they have participated in the atrocities of persecution of Falun Gong, live organ harvesting. Entry should be refused to those who are guilty.

Third, demand UN to take the approach in investigation of North Korean government: To initiate Commission of Inquiry to investigate the Chinese Communist Party crimes against humanity and to submit the main culprits to the International Criminal Court for prosecution.

Mei-Nu Yu, Taiwan legislator: “I believe this inhuman organ harvesting, and unknown organ sources ought to be prohibited and condemned. That’s what this international alliance, especially with many health professionals, ought to do.”

Taiwan legislator Mei-Nu Yu indicates that many Taiwanese patients have unknowingly undergone organ transplants in China because of a long wait in Taiwan. To these patients, it is unfair to be treated with organs of unknown sources. It is very important to keep people informed of the truth of live organ harvesting. The information on the organs needs to be transparent.

Mei-Nu Yu: “Through such an alliance, the so-called consumer side is prohibited, then the organ provider side will be prohibited. The transparent information and certificates on organs will ensure none of the organs were from sources of underground and inhumane.”

The Epoch Times has reported that live organ harvesting and stealing and selling of bodies occurred first in Dalian due to then Dalian mayor and Liaoning governor Bo Xilai following Jiang Zemin’s policy to persecute Falun Gong. Because of its massive profit, this atrocity was soon extended to labor camps, detention centers, prisons and temporary detention facilities throughout China. The entire CCP political and legal systems, hospitals and the underworld organ agencies have colluded together and made huge profits out of live organ harvesting from Falun Gong practitioners.

Mei-Nu Yu: “The live organ harvesting from dissidents or people of religions is inhuman. Everyone in the world should condemn these criminal acts.”

In 2006, the exposure of the CCP’s crimes in live organ harvesting from Falun Gong practitioners shocked the world. Up until last December, congresses and parliaments of more than 12 countries have condemned the CCP’s crimes through passing resolutions, open hearings, and conducting seminars.

December 12 last year, the European Parliament passed a historic resolution in Strasbourg, France calling for the immediate end of the CCP’s forced organ harvesting from prisoners of conscience and the Member States to publicly condemn this act and inform European citizens in need of organ transplantation.