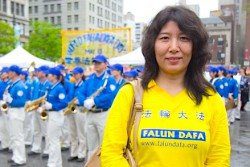 NEW YORK—Shiping Lu said she still sometimes dreams of the police in China chasing her. The 47-year-old Falun Dafa practitioner, originally from the Chinese city of Harbin, now lives in Finland with her husband. This past week she was in New York where she joined 8,000 practitioners from around the world for a conference involving a series of events that celebrate the wonderfulness of the spiritual practice, but also remind of the persecution in China, and those still suffering from the terrible oppression.

Every practitioner has a story. Before Lu gained asylum in Europe in 2007, her life had gone from peaceful to a series of tumultuous, tragic events.

She has been practicing since 1995, when a 28-year-old Lu came across the books of Falun Dafa at her mother’s house.

“I opened the book and read that people could be saved—I read the word ‘salvation,’” she recalled.

That one word would alter the course of her life, bring her joy, and give her strength to face the bitterest of situations.

Falun Dafa, also known as Falun Gong, is a mind-body meditation practice that has been passed down from master to disciple for centuries. Teacher Li Hongzhi introduced it to the public in 1992. The practice involves a set of five exercises, and a teaching of the universal principles of truthfulness, compassion, and tolerance. Its free teaching is practiced in over 140 countries.

For Lu, who was a very successful marketing professional in the large state company, Harbin Pharmaceutical Group, Falun Dafa was the light at the end of the tunnel.

“I was very satisfied with my income, but I felt like I needed something spiritual,” said Lu. Along with several family members, she began to practice the Falun Dafa meditation exercises and read the book on a daily basis. She told all her colleagues and close friends about the mental and physical benefits of the practice. She did the exercises in a nearby park daily with about 100 others.

By the mid 1990s Falun Dafa was rapidly spreading by word of mouth. There were millions and millions of others like Lu, and more were learning every day.

By the late 1990s, the Chinese Communist Party (CCP), which had previously supported Falun Dafa, came to see its popularity as a threat to the regime.

In 1999, former CCP leader Jiang Zemin launched a brutal persecution against Falun Dafa, with the goal of eliminating it. Practitioners throughout the country were systematically rounded up, detained, tortured, and sent to brainwashing centers. The regime used all means to attempt to force practitioners to give up the practice.

In the months before the crackdown Lu and other Falun Dafa practitioners in China could sense that there was, in Lu’s words, “a storm coming.”

Lu’s exercise practice site was forced out of the park by the police and into a nearby apartment complex yard. In the yard while doing the exercises they were sprayed with high-pressure water hoses. The practitioners then moved to street curbs.

The official launch of the persecution on July 20, 1999, ripped across mainland China with a fury. Practitioners were literally rounded up in groups so large they had to be kept in stadiums. There was no more practicing outdoors allowed. By this time, according to a government estimate, 100 million Chinese were practicing Falun Dafa.

Lu was among those taken into custody in the early days. She and 10,000 others had gone to their provincial government appeals office to express concerns about reports that practitioners were being arbitrarily arrested. They were immediately arrested.

It would be the first of five times she’d be arrested and detained until she escaped to Finland.

After going on a hunger strike to protest her unjust detention, Lu was force-fed through a tube. She was tortured and constantly pressured to quit practicing. In a labor camp she was given multiple thorough medical exams—but not because the authorities were concerned about her health. Lu later realized the camp was looking to document her blood type for their living organ bank. Falun Dafa practitioners say one of the ways the regime has been killing practitioners is through forced organ harvesting, a gruesome and inhumane practice that continues today.

Canadians human rights attorney David Matas and former Secretary of State for the Asia Pacific region David Kilgour investigated allegations based on witness testimony of live organ harvesting in China, and have written two books documenting the evidence they collected. After publication of their first book they traveled extensively and gathered more evidence, reinforcing their original conclusion that the allegations are true. “We believe that there has been and continues today to be large-scale organ seizures from unwilling Falun Gong practitioners,” they conclude in “Bloody Harvest.”

Lu felt her persecutors’ main goal was to get her to quit practicing Falun Gong, but Lu wasn’t going to budge. The decisive moment that gave her the strength to resist came in the early days of the persecution.

A highly valued employee in her work unit, Lu’s supervisor had tried to force her to write a letter denouncing Falun Dafa soon after July 20. She was put in a room alone with a piece of paper and about 10 pens, and was told to write a letter. The content of the letter was supposed to offer a reassurance of some kind that she would quit practicing Falun Dafa.

At first, Lu considered using the chance to write something tongue-in-cheek. Something happened in that moment that to her, seemed “miraculous.” The first pen she tried didn’t work. The second pen didn’t work. It seemed no ink would flow from any of the many implements left before her. In that moment, she made another life-changing decision and stood up, firmly and resolutely, for the practice that she believed had saved her.

“I made up my mind to write how good Falun Gong is,” said Lu. From that moment, she said the pens all worked.

Since that day, Lu has continued to stand up for her beliefs. Throughout the years, about 20 of Lu’s immediate and extended family members have also come to practice Falun Dafa, including all three of her siblings and her parents. From the early days of the persecution in China, her family used whatever methods they could to tell other Chinese people that the propaganda being spread throughout the country against Falun Dafa was blatant, malicious lies.

For Lu, each time she landed in a detention center, she was severely beaten, and there were threats of more serious persecution. She eventually lost her job.

“They said I should be sent to a (forced) labor camp,” she recalls.

Finally, Lu joined another practitioner to protest on Tiananmen Square in Beijing. They held a banner that said, “Falun Dafa is Good” and called out in the famed square that is known as the heart of China and is the center of key national government buildings.

They were promptly arrested. This time she was sent to the infamously brutal Wanjia Labor Camp in Harbin City. She was put in isolation, tortured, and forced to work from 5 a.m. to midnight making products for international export.

Lu’s life since she left China is drastically different. Though it took her almost one year of living in Finland to overcome the fear of a sudden knock on the door or the sight of police, today she can travel freely to other countries. She can also speak freely about the brutality of the persecution.

“Every day there was a matter of life and death,” she recounted of her time in the labor camp during a speech in 2013 before the Israeli Parliament. Lu was in Israel to speak out against the practice of forced organ harvesting. Israel is a rare case in the international community for its position on the issue. It is illegal for Israeli citizens to travel to China for an organ transplant.

On the day the persecution started, there was another Falun Dafa practitioner in China who saw the storm begin. Liam O’Neill, 36, a student at the time, couldn’t have been any more different from Lu. An undergraduate at Swarthmore College, O’Neill was studying in China between his junior and senior years—on a summer research trip to study the re-emergence of Buddhism after the Cultural Revolution.

That same year he had started practicing Falun Dafa after learning about it from a friend in college.

When July 20 came, all of Beijing seemed to be gripped with fear, and he was kicked out of the temple he had been staying in.

For the young college student, word of mass arrests and the launch of a large-scale persecution didn’t sway his belief.

“My reaction at the time was pretty simple,” he said. “I thought it was similar to Rome persecuting Christianity. It was a sign to me to keep practicing.”

Years later, he teaches Chinese to high school students in New Jersey, where he lives with his wife of twelve years and their three children. This past week, he was also in New York City for an international Falun Dafa conference.

Lu and O’Neill met in Manhattan’s Union Square for the first time Thursday.

For Lu, meeting freely and practicing freely are never taken for granted.

“I can feel the sharp contrast of the two different worlds, the free world, and inside China,” said Lu. “But I believe firmly that a day like this in China will soon come; a free China.”

O’Neill said he has been studying what goes on in China for 15 years and has come to the realization that “folks living outside of China can’t really grasp what it’s like to be in China during this persecution.”

Once a successful long-distance runner in high school and college, O’Neill said his spiritual beliefs have given him another kind of longevity.

“People knew me as a successful distance runner,” he said. “But what Falun Gong gave me was an emotional endurance.”

That endurance goes a long way in his daily task of teaching.

“High school kids can be a difficult bunch to deal with,” he said, but added that he gives Falun Dafa a lot of the credit for helping him connect with students. “Kids really like me because I genuinely like them and enjoy their company.”

His attention to what’s best for the students has paid off. Last year, he was honored with the Best of New Jersey Award from the Foreign Language Educators of New Jersey, a statewide organization that supports foreign language teachers. O’Neill said he also teaches some of the largest Chinese classes in the United States.

Through it all, Falun Dafa plays a key role in instructing his students, as O’Neill integrates modern Chinese history into his teachings.

“I tell them what the Chinese Communist Party has done to Falun Gong and Chinese people in general,” he said.

For O’Neill, what matters most is his personal attention to the practice, which he describes as uplifting in a very unique way.

“It gives me breath. There’s nothing else like practicing the exercises and reading the book.”