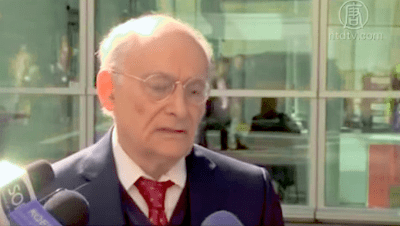 Recently, the crime of organ harvesting from live Falun Gong practitioners has been watched by the international community. The 2014 World Transplant Congress (WTC) was just held in San Francisco between July 26 and 31. The organizer rejected 35 Chinese participants on the grounds of medical ethical.

According to the US Minghui website report on August 1, a Chinese organ transplantation doctor mentioned in the book, Bloody Harvest was arrested a week ago by authorities. Another transplant doctor Wang Haibo, who is also an official of the Chinese Communist Party (CCP) Health Ministry, was temporarily absent for no reason.

The report said, Canadian human rights lawyer David Matas revealed at the WTC on July 29, the arrested doctor Zhu Yunsong worked in a major hospital and engaged in organ transplantation for many years, authoring numerous articles. The Chinese authorities arrested him on charges of abuse of organ transplantation. Matas said that Zhu admitted himself that he participated in transplantation operation using organs from Falun Gong practitioners.

The report said that China is different from other countries because it likes to commemorate their defeat. Also they like to memorably commemorate the defeat and add China’s victimization to official history. It is because the ruling Party can increase legitimacy of its rule using the nationalism pathos. Gao Zhisheng’s Release Imminent, Will He Become a Free Man? On August 7, the human rights lawyer Gao Zhisheng detained in Xinjiang Shaya prison will finish his sentence. Currently, whether he will get free for real has attracted global attention. His wife Geng He said, Gao Zhisheng’s older brother went to pick him from the jail in Xinjiang on August 1.

On August 1, British Foreign Office Human Rights Group posted on Twitter expressing concern for Gao’s safe release. On August 1, international human rights organization Human Rights Watch also issued a press to urge the Chinese Communist Party (CCP) to release Gao Zhisheng without any restriction. Human Rights Watch said they all have concerns that Gao Zhisheng will be under house arrest after his release. Two days ago, the US Congress released the International Religious Freedom Report to urge the CCP to release Gao Zhisheng who was arrested for appealing for Falun Gong practitioners.