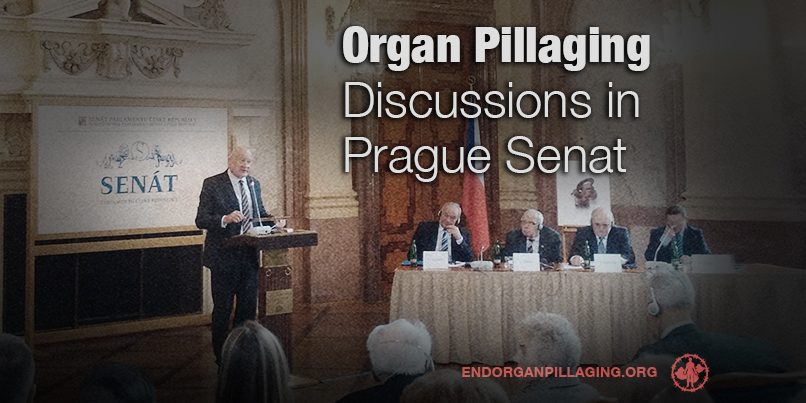 PRAGUE—At a week-long international festival against totalitarianism that concluded in the Czech capital on Feb. 27, attendees commemorated the struggles of victims living under past and present regimes.

This year, two prominent guests, former Canadian Secretary of State for Asia-Pacific David Kilgour and investigative journalist Ethan Gutmann, were invited to the Family in Times of Unfreedom event to speak about ongoing human rights abuses in China, especially the mass killing of Chinese prisoners of conscience for their organs.

The two experts’ visit helped connect present-day victims of the Chinese regime with the Czech people’s recent historical experiences, in which “…ideology permeated all spheres of life, including the family,” as Kilgour put it.

Kilgour called organ harvesting “a form of neo-cannibalism” while Gutmann, an award-winning China analyst and author of the book “The Slaughter,” said the crime was something unseen since the Holocaust.

You cannot control what is going on in China but you can control your own citizens.
— David Kilgour, former Canadian Secretary of State, Asia-Pacific

Referring to reports of organ harvesting by ISIS, Gutmann presented a reason for urgency in taking steps toward a better situation: “Indeed, when evil is not met with resistance, it will surely spread.”

The Family in Times of Unfreedom event is the 9th Mene Tekel Festival, an international conference held in the Czech Republic to highlight the human tragedies and heroism of people living under communist regimes across the world.

Though communism in Czechoslovakia and other Soviet-dominated nations came to an end in 1989, China is still a one-party state controlled by an authoritarian communist regime that continues to abuse human rights on a large scale.

One group that continues to endure particularly brutal abuses, including organ harvesting, are practitioners of Falun Gong, a traditional Chinese spiritual practice against which the Chinese Communist Party (CCP) launched an unlawful persecution in 1999.

Speaking in the Senate of Czech Parliament, Gutmann described his calculations of the number of Falun Gong practitioners murdered for their organs. “The majority were middle-aged women. What I cannot calculate is the effect on these women’s families. But we can guess.”

Together with Canadian human rights lawyer David Matas, David Kilgour conducted groundbreaking research on the CCP’s forced organ harvesting. Their findings, published in the report and later book “Bloody Harvest,” concluded that between the years of 2000 and 2005, the most likely involuntary donors for 41,500 transplant operations performed in China were practitioners of Falun Gong.

Both guests called for the Czech Republic to ban organ transplant tourism to China, giving as an example Israel, which passed similar legislation a few years ago.

“You cannot control what is going on in China but you can control your own citizens,” Kilgour said.

Throughout their busy schedule in Prague, Kilgour and Gutmann have been interviewed by various local media, including Czech Radio, Czech Television, and other outlets. They also met representatives from professional medical bodies to discuss forced organ harvesting.

Public Statement by the Italian Federation for Human Rights on Forced Organ Harvesting Practice in the People’s Republic of China
April 23, 2021