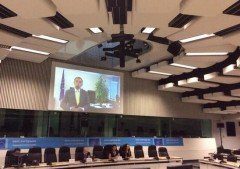 An organization in Europe has sought to put organ harvesting in China at the top of the agenda during the current trip to Europe of Chinese Communist Party general secretary Xi Jinping.

Xi arrived in Europe on March 22. He met with U.S. President Barack Obama on March 24 and is holding meetings with various European officials and governmental representatives, among them European Council President Herman Van Rompuy.

The European Economic and Social Committee said its plan was to “welcome” Xi Jinping to Europe when they held a forum on March 19 which announced that the Chinese regime’s use of organs “from prisoners of conscience, executed persons, and minorities groups, to be sold in China or outside the country, is a disgrace for humanity and should end immediately.”

Henri Malosse, the president of the EESC, a large non-governmental organization that is a consultative body to the European Union, said that their goal was to “raise public awareness of a practice that we consider unacceptable,” in a telephone interview with the Epoch Times.

He continued: “It’s something that people might think happened 50 years ago, but it’s happening today, this inhuman behavior of the Chinese authorities.”

Malosse has brought the matter to the attention of European Council President Van Rompuy, and said that he hopes the latter will raise the issue with Xi Jinping during their meeting.

The EESC forum was covered in the Russian, Italian, Slovakian, and other language medias in Europe.

The Chinese mission at the European Union also found out about it. “They were very serious and very angry that we organized this conference,” Malosse said, underscoring the importance that the forum was held.

The most acute concerns harbored by outside groups on organ harvesting in China relate to the execution of prisoners of conscience for their organs. In this scenario, military hospitals and detention facilities cooperate to procure organs from living individuals who are not guilty of any internationally recognized crime, secretly killing them to harvest their organs for profit. This practice has taken place in China since 2000 on an extralegal basis, and, despite some degree of international attention, is thought to still continue in some form in China today.

Practitioners of Falun Gong, a traditional spiritual practice, have for years been almost the sole target of such practices. A seminal 2006 report by two Canadian researchers concluded that around 41,500 organs were most likely transplanted from secretly executed Falun Gong practitioners. Subsequent researchers have updated those estimates by several more tens of thousands.

Global concern about ongoing organ transplantation practices in China were heightened recently when Huang Jiefu, the chief of China’s Organ Donation and Transplant Committee, the body that seeks to coordinate organ transplantation policy in the country, reversed the longstanding official position on the use of prisoner organs.

He told Chinese media agencies that “judicial agencies and local health ministries should establish ties, and allow death row prisoners to voluntarily donate organs and be added to the computer organ allocation system.”

Family members who assented to the harvesting of their condemned relatives would be financially compensated, Huang said.

This development was a reversal of the position held by Chinese authorities since 2006, which promised to reform and eventually eliminate the use of organs from executed prisoners.

The unexpected backflip has caused international transplant groups to reassess their level of cooperation and support for the supposed reforms that Chinese authorities had promised for so long.

Malosse, the president of the European NGO, said of this recent news that it was a “sad, inhuman development.” The offer of money to consenting families is “blackmail,” he said.

“It’s a commercial utilization of persons. If I die tomorrow in a car accident and I come to my own decision to give organs to another person, I think this is a very good action for others. But getting organs from executed prisoners, and buying their permission with money, is even worse. It’s inhuman—the brutality of the Chinese regime.”