OPEN LETTER to the Vatican’s Pontifical Academy of Sciences (PAS) 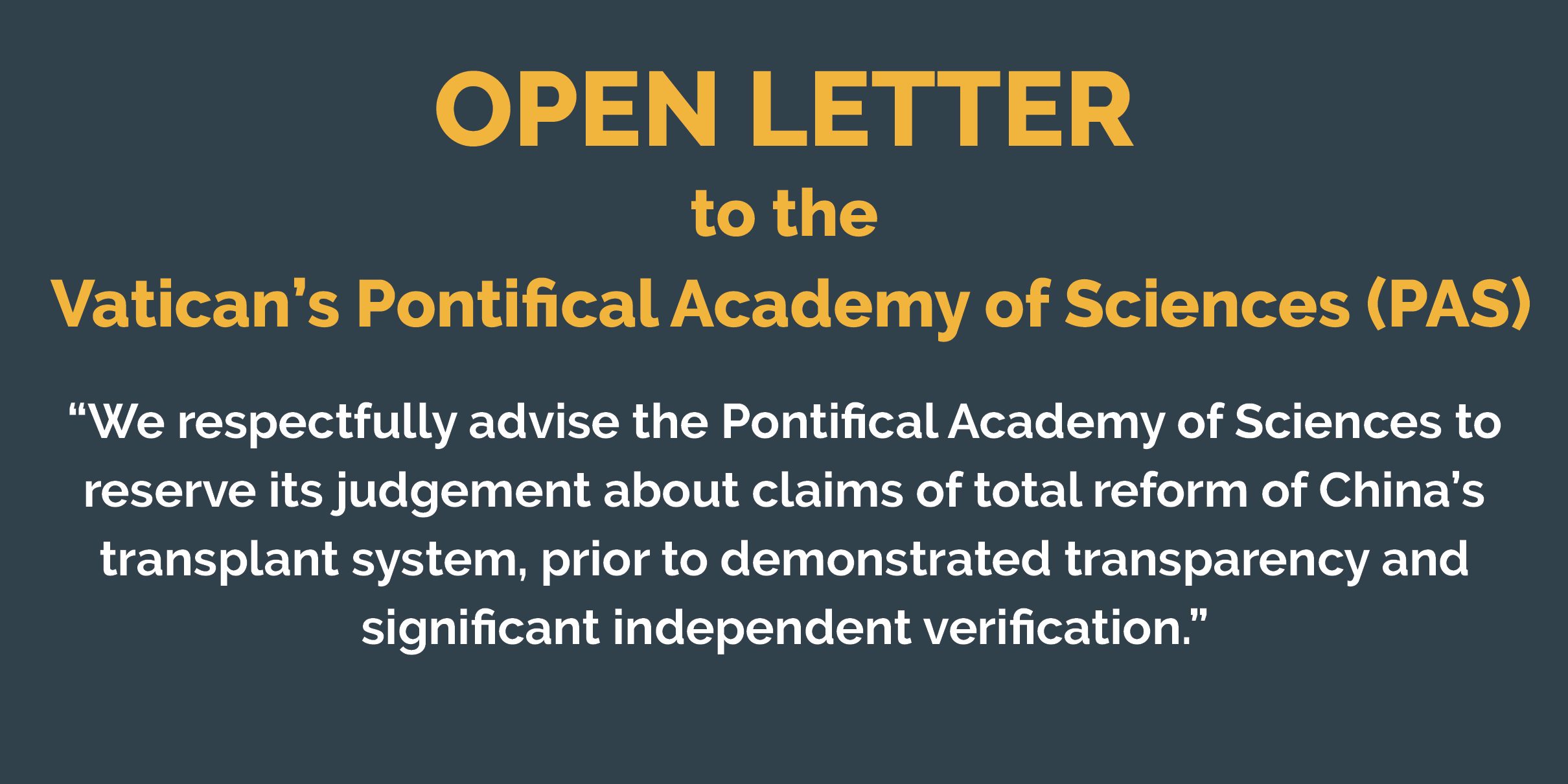 Committee members of the International Coalition To End Transplant Abuse In China (ETAC) wrote to the Vatican’s Pontifical Academy of Sciences (PAS) to express concern that the Vatican conference “Modern Slavery, Human Trafficking, and Access to Justice for the Poor and Vulnerable” held from March 12-13 included among its attendees and speakers Dr. Wang Haibo, the head of the China Organ Transplant Response System (COTRS).

Read the letter below to understand why this is concerning.

The Pontifical Academy of Sciences

We note that the Vatican’s recent conference “Modern Slavery, Human Trafficking, and Access to Justice for the Poor and Vulnerable” held from March 12-13 included among its attendees and speakers Dr. Wang Haibo, the head of the China Organ Transplant Response System (COTRS).

COTRS purports to be the sole system for the distribution of donated organs in China since September 1, 2013. Beginning on January 1, 2015, officials claimed that COTRS no longer allocated any organs from prisoners of any kind. Since then, the claimed number of organ donations in China has risen almost exponentially — a truly remarkable feat.

Yet the People’s Republic of China has passed no new laws or regulations outlawing the use of prisoner organs and has never acknowledged the extrajudicial execution of prisoners of conscience for their organs despite robust evidence indicating this has and could still be taking place. In addition, a complete absence of any due process whatever in the Chinese “judicial” system dictates that no assumption of guilt can be made in the case of any “convict” executed in China. China has not rescinded — or even publicly acknowledged the existence of — the secret 1984 order that forms the regulatory basis for organ harvesting from prisoners.[1] Meanwhile, there is a continued widespread cultural resistance to organ donation, which has not changed based on statements of a policy shift in Beijing.

The alleged reform of China’s transplant system, such as it is, is vouchsafed solely by statements made by Dr. Huang Jiefu to the media. Such statements are taken to represent state policy. But with no statutory or regulatory framework outlawing use of prisoner organs, and no accountability for those who have claimed credit for leadership of a system rife with gross human rights abuses (which includes leading surgeons Huang Jiefu, Zheng Shusen, and others), these claims are scarcely credible. They are not even credited by Huang Jiefu’s main supporter in the West, Francis Delmonico, former president of The Transplantation Society, who told the U.S. Congress in June 2016 that he could not verify that use of organs from prisoners has ceased.[2]

China claims to maintain a transparent system of organ donation and transplantation, and yet the following facts obtain:

In short, China’s transparency regarding its claimed reform is woefully lacking, and there are no reasons yet to endorse the changes that are claimed by Chinese officials to have taken place.

A potential World Health Organization-affiliated Organ Donation and Transplantation Task Force, proposed by Dr. Huang, would not allay any of the above concerns. Such a task force would not have unfettered access to Chinese transplant facilities, personnel, and computer systems, and would thus be unable to verify that changes in transplant practice in China has taken place. At best, such a task force would merely serve as a publicity exercise, misleading the public about reform in China while distracting attention from past and ongoing abuses.

Most recently, as shown in a documentary released in November 2017, a South Korean investigative news crew travelled to the Tianjin First Central People’s Hospital and found it to be a hive of transplant activity.[3] Posing as potential transplant recipients, the crew was told by a nurse that the international department performed “three kidney and three liver transplants yesterday.” The reporters calculated that if the known transplants during that week were extrapolated, the total would come to several thousand transplants annually. A doctor told them that waiting times may be two days, or a week. “If you want to arrange for the surgery to be done faster, you need to donate to our foundation,” he said.

These gaps in data, and documented abuses, demonstrate prima facie that China’s transplant system has not been thoroughly reformed. The horrendous abuses that have been extensively documented, and brought to your attention previously, cannot be confirmed to be merely a thing of the past. Indeed, even if they were, the perpetrators must still be brought to justice.

We would also like to note that the attendance of Chinese representatives at the recent event has been used for domestic and foreign propaganda purposes by Chinese state-controlled media entities.[4] Chinese transplant officials explicitly linked their participation to relations between the Vatican and Beijing.[5]

We respectfully advise the Pontifical Academy of Sciences to reserve its judgement about claims of total reform of China’s transplant system, prior to demonstrated transparency and significant independent verification of the alleged 2015 reforms. If such claims are found to be false, the reputation of the Academy is at stake, along with that of China’s leading organ transplant officials.


Member of the IAC


Member of the IAC

Professor of Law and Director of Legal Studies, University of Canterbury

Head of the Discipline of Medical Ethics, Law and Professionalism, School of Medicine, University of Queensland

[2] Joint hearing, Committee of Foreign Affairs, House of Representatives, “Organ Harvesting: An Examination of a Brutal Practice,” June 23, 2016. Available at: http://docs.house.gov/meetings/FA/FA16/20160623/105116/HHRG-114-FA16-20160623-SD006.pdf. Delmonico said: “I am not here to verify. That is not my job… we do know that it is occurring still within China. But it is not my—it is not my job to say to you that it is eradicated or completely stopped.” Regarding access to the Chinese military hospitals Delmonico stated, “No, I don’t have access.. Sure it could be going on there.”

Forced Organ Harvesting from Prisoners of Conscience: the Intersection of Medical Advocacy and Medical Ethics by David Matas
October 29, 2020

‘Gandhi and Human Rights, the Modern Context’ by David Matas (Talk prepared for presentation to The India Centre, University of Winnipeg)
October 12, 2020